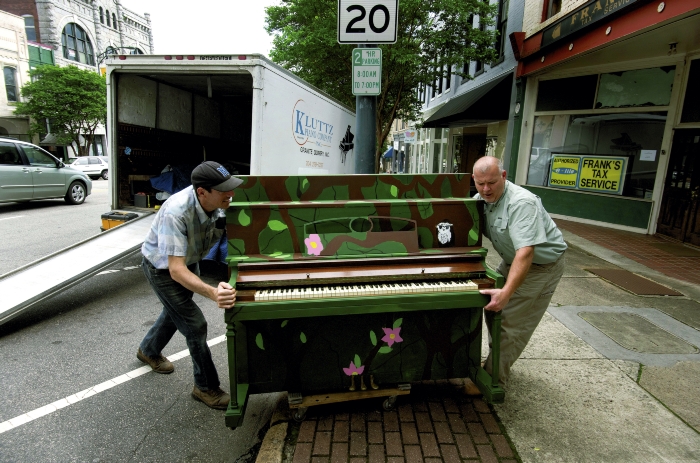 Kevin Dupre, left, and Jonathan Kluttz from Kluttz Piano Co. have been delivering the latest selection of the downtown Salisbury public art project called ‘Come Tickle Our Ivories.’ The pianos will be covered until the unveiling during the First Friday event this week. Jon C. Lakey/Salisbury Post

SALISBURY — Jonathan Kluttz and Kevin Dupre joke as they roll a piano covered in painted vines and flowers down a ramp.

The piano was painted by students at Southeast Middle School and is one of the 10 that make up the “Come Tickle Our Ivories” public art installation which unveils Friday during Downtown Salisbury, Inc.’s first Friday Night Out of the year.

This is the second year the installation, a project of the Salisbury Symphony, has been featured downtown. The first year, it was a peace offering, a chance for people from Salisbury and the county to interact, sing and be bound by music.

“The idea of pianos is it’s interactive,” organizer Mary James said in an earlier interview. “People can sit down, play, do something with these public art pieces.”

She got the idea from her sister, who brought street pianos to Lynchburg, Virginia. But public music has been a catching idea since 2008, when London artist Luke Jerram sought to create public art pieces to promote interaction. That project was called “Come Play Me, I’m Yours.” Since then, the idea has hopped continents, rooting in unexpected places. James says similar projects have taken off in Australia, New York, Denver, Seattle and San Francisco.

But Salisbury’s pianos have a twist: all of the pianos were designed and decorated by students from 10 Rowan County middle schools. The public art pieces will have their debut at 5:30 p.m. as student musicians from each school show off their skills.

Piano themes range from school pride to “Alice in Wonderland,” and are placed strategically around downtown Salisbury in front of locations like Sweet Meadow Café and the Meroney Theater.

Kluttz Piano will be delivering the pianos downtown over this week, and on Friday the instruments will have their big debut.

The installation also serves as a fundraiser to benefit symphony youth music education programs and the schools’ art departments.

Pianos will remain outside for five-months  — from May 6 to Sept. 30 – weathering sunshine and rain. Another, display-only piano will be located under the clock at the intersection of Innes and Main streets with a list of piano locations.