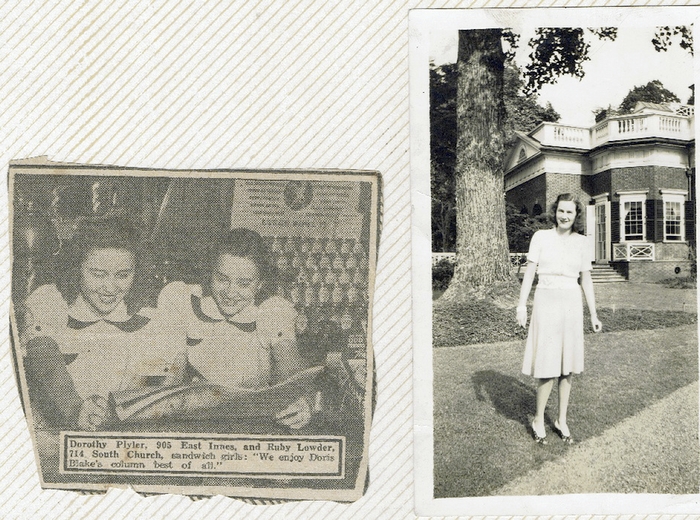 Steve Arey says he was going through old newspapers that his  parents had saved and he found a clipping showing Ruby Lowder Arey, his mother, and her friend, Dorothy “Dot” Plyler Mauney, reading an article in the newspaper. Ruby is on the right. At the time, which Arey judges to be 1936, the young women both worked at the DAN DEE Ice Cream Shoppe on South Main Street. The newspaper identified them as ‘sandwich girls,’ and quoted them as saying, “We enjoy Doris Blake’s column best of all.’ Arey noted that Blake had a syndicated advice column for people with ‘love problems.” That’s Arey’s mother, Ruby, in the individual photograph to the right, on a 1941 visit to Monticello, the Charlottesville, Va., home of Thomas Jefferson. Arey says Dot married John Mauney, and they operated the dry-cleaning shop on East Fisher Street that was between today’s Santos restaurant and the former Benchwarmers club. Ruby married Allen Arey.

Yesterday: Students from Frank B. John School in 52-53