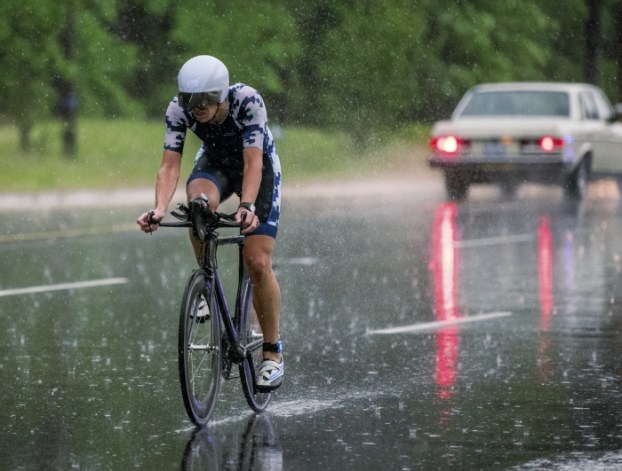 ALLISON LEE ISLEY/SALISBURY POST Cody Stadler, of Charlotte, makes his way along Jake Alexander Boulevard to finish up the bike portion of the 7th Annual Buck Hurley Triathlon early on Sunday morning, May 1, 2016 at the J. F. Hurley YMCA in Salisbury. Participants and volunteers toughed out the constant downpour of rain throughout the event. Stadler came in sixth overall for the men.

SALISBURY — The thunder and lightning did not stop the seventh annual Buck Hurley Triathlon on Sunday.

Participants biked and ran in the rain, which varied from a downpour with thunder and lightning to a light drizzle.

The first people ran across the finish line around 8:30 a.m.

The triathlon featured a 300-yard sprint in the pool, more than 10 miles on bikes and a 5K run.

Officers from the Salisbury Police Department helped with blocking off traffic lanes for the bicycle and foot-race portions, with temporary lane closures on Jake Alexander Boulevard starting at Lincolnton Road and ending on Statesville Boulevard at Brenner Avenue.

Other emergency personnel were also at the race, including the Salisbury Fire Department and EMS personnel.

Anywhere from 175 to 200 volunteers were directing the racers, cheering them on with cowbells and holding umbrellas.

There were more than 85 participants. There were three teams, including a family team that had the daughter swim, the father bike and the mother run, said volunteer Lori Mason.

The participants were mostly from North Carolina, including Charlotte, Concord and Rowan County. There were also participants from South Carolina and Maryland.

Volunteer Jennifer Burroughs said there were parents, doctors, lawyers and people from all walks of life competing.

“Our triathlon caters to everyone,” she said.

Ester Marsh, race director and associate executive director for the Y, said despite the rain, most participants enjoyed the race.

She said some of the participants crossed the finish line saying, “It’s the best race ever.”

The top overall male winners were Derek Kidwell with a time of 49 minutes and 29 seconds, Cory Tretsky coming in at 52 minutes and 9 seconds and Yorlliry Moreno with 52 minutes and 18 seconds.

The top overall female winners were Kelly Fillnow with a time of 55 minutes and 49 seconds, her twin sister Meghan Fillnow with 56 minutes and 40 seconds and Mary Rosser coming in at 1 hour, 1 minute and 17 seconds.

Every participant received a medal for finishing the race.

Kelly Fillnow, from Charlotte, participated in the race last year and convinced her sister to join her this year. She said the rain made the roads slick while biking, but other than that she thought the race went well.

“It was really fun with the pouring down rain,” she said.

She also said the volunteers were enthusiastic and supportive.

“They were cheering and it made such a difference,” she said, also saying she was grateful for the Y and the community for hosting the event.

Derek Kidwell said the conditions were challenging, and he was a little slower than he was last year, but he had a good time.

“Running in the rain is always somewhat enjoyable,” he said.

Mary Rosser, from Salisbury, she was used to riding her bike in the rain so it was not as difficult for her.

“I think it was great in spite of the rain. It just made it more exciting,” she said.

Marsh said the event could not have happened without the help of the volunteers. Considering the challenges the rain brought to the race, Marsh said it all went smoothly.

“I look forward to coming back next year,” Kidwell said.

The Dart: Father-son pair spend a Saturday at the park