The Dart: Father-son pair spend a Saturday at the park 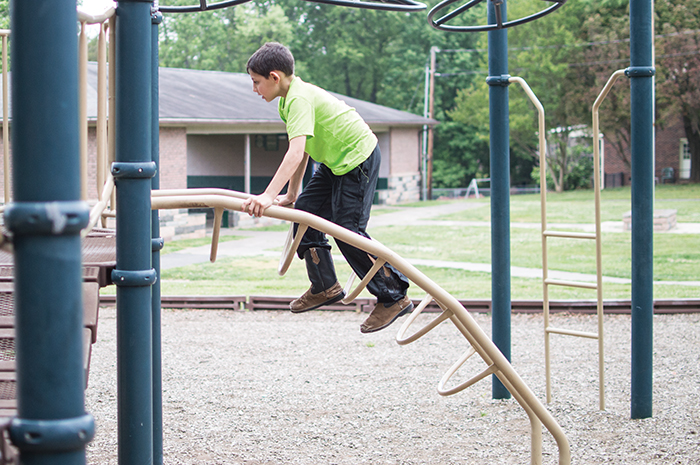 Josh Bergeron / Salisbury Post - Nine-year-old Caden Limly climbs up a playground on Saturday during a trip to Granite Civic Park.

GRANITE QUARRY — Cloudy skies lingered overhead and heavy rain was forecast for later in the day, but Salisbury resident Darrell Limly couldn’t help but crack a smile as he sat on a park bench.

A rain storm would later drop up to one inch of rain on parts of Rowan County. For now, the dreary weather was paused for a father-son day at the park. While sitting in Granite Civic Park, Limly watched as his son Caden zipped across the playground.  Caden, a 9-year-old, zoomed up slides, sprinted across bridges and tried his hand at hide and seek. Darrell predicted that his son would soon be ready for an afternoon nap.

“Like a kid, he’ll be worn out, take a nap and be ready to get up and go again a few hours later,” Darrell said.

The father and son didn’t have any major plans on a gray Saturday afternoon, and Caden suggested going to a park. Dan Nicholas was an initial suggestion, but they opted for a spot closer to home — Granite Civic Park, which is located on West Peeler Street. Darrell and Caden, however, both list Dan Nicholas as the best park in Rowan County because of the variety it offers for visitors — an aquarium, carousel, gem mine, nature center, paddle boats, aquarium, lake and water plaza.

Perhaps in contrast to many of his peers, Caden said he’d rather be outside than watching TV or playing video games.

Caden said his favorite games to play outside are hide and seek or pretending he’s a superhero. When asked about his favorite superhero, Caden quickly responded with his answer — a cartoon child who lives a normal life by day and becomes an alternate identity at night that has gecko-like powers. The character is named Greg and appears on the Disney TV Show “PJ Masks.”

Caden easily described the super powers the gecko character has — super lizard grip, super gecko muscles and camouflage — and then showed them off, darting across the playground.

Darrell said spending a day at the park is one of his favorite activities to do with his son.