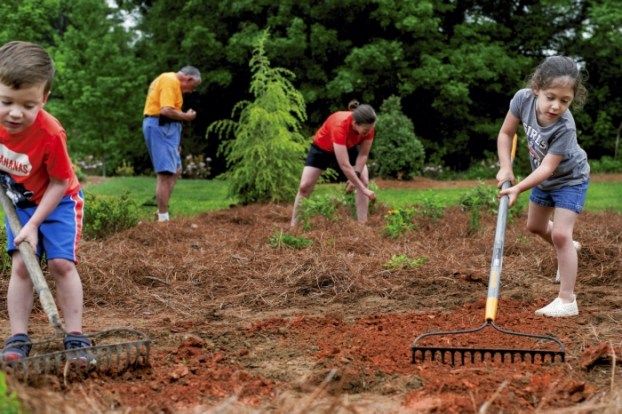 SALISBURY — The Salisbury area may soon be seeing more monarch butterflies, thanks to a Rowan Rotary Club community service project.

The Rowan Rotary Club planted its first butterfly garden at the Glenn A. Kiser Hospice House at 1229 Statesville Blvd. on Saturday as part of its Butterfly Garden Project.

Jerry Chandler, the club’s president, said every president chooses a special community service project to complete during their tenure. The district level of the club was already advocating for butterfly gardens, so he decided to take on the challenge.

“I suggested it to the board, because I know a lot of them are environmentalists and conservationists, and they just took right to it,” Chandler said.

Chandler said he heard that other chapters had planted butterfly gardens at local hospice centers and decided to plant one near the walking trail at the Kiser Hospice House.

Edwina Ritchie, director of the Hospice House, said she was excited about the project.

She said the facility has worked hard to beautify the grounds to provide pleasant scenery for families.

“It just adds to our grounds and is just something else for our families to enjoy,” she said.

The club filled the garden with plants butterflies and other pollinators need to survive.

According to the World Wildlife Fund (WWF), monarch butterflies travel between 1,200 and 2,800 miles or more from North America to forests in central Mexico during their migration periods.

It takes three to four generations of monarchs to reach their destinations when migrating from Mexico to North America, according to the United States Department of Agriculture’s Forest Service.

Over the decades, monarchs have faced winter habitat loss because of agriculture and tourism activities in the mountain forests in Mexico, according to the WWF. The availability of the milkweed plant, the monarch’s primary food source, especially for monarch larvae, has decreased in the U.S. because of the use of herbicides.

Climate change has also been causing problems for the monarchs. A report from the WWF from 2013 found that the number of monarchs spending their winter in Mexico was the lowest it had been in 20 years. The WWF states that abnormal patterns of rainfall and drought at the breeding sites in the U.S. and Canada may have caused adult monarchs to die and may have also led to less plant food for the caterpillars.

In order to combat the loss of habitats for the monarchs, individuals and organizations have started planting gardens with milkweed and other plants for pollinators, including bees, birds and bats.

The Rowan Rotary Club plans to start another garden at Knollwood Elementary School. The Club has worked with the school to develop lesson plans that teachers can use in their science classes to go along with the garden.

“We thought it would be a good educational tool for the school and their science classes,” Chandler said.

Shive Elementary School students will be planting the milkweed plants for the club to plant at a later date. The club has also encouraged Catawba College’s Omicron Chapter of Alpha Chi, a national college honor society, to start their own butterfly garden.

“We’re trying to spread the word on how good this is for the environment,” Chandler said.

Craig Powers, co-chair of the project along with Lisa Markham, said the Hospice was a good place for the club to plant its first garden.

“I think with the Hospice House and all the good that they do for families, it was a perfect combination,” he said.

Wes Thompson, vice president of the club, said the butterfly garden served a double purpose of helping pollinators and the families at the Hospice House.

“It’s something real nice to do for the folks at the Hospice House,” he said.

“Bringing more butterflies adds to the beauty of the community,” she said.

The club will be maintaining the garden for the Hospice, and Chandler said they hope to plant more gardens around the community.

A perfect partnership at A Perfect Dress

By Amanda Raymond amanda.raymond@salisburypost.com CHINA GROVE — Prom season is the busiest season for the women behind A Perfect Dress,... read more