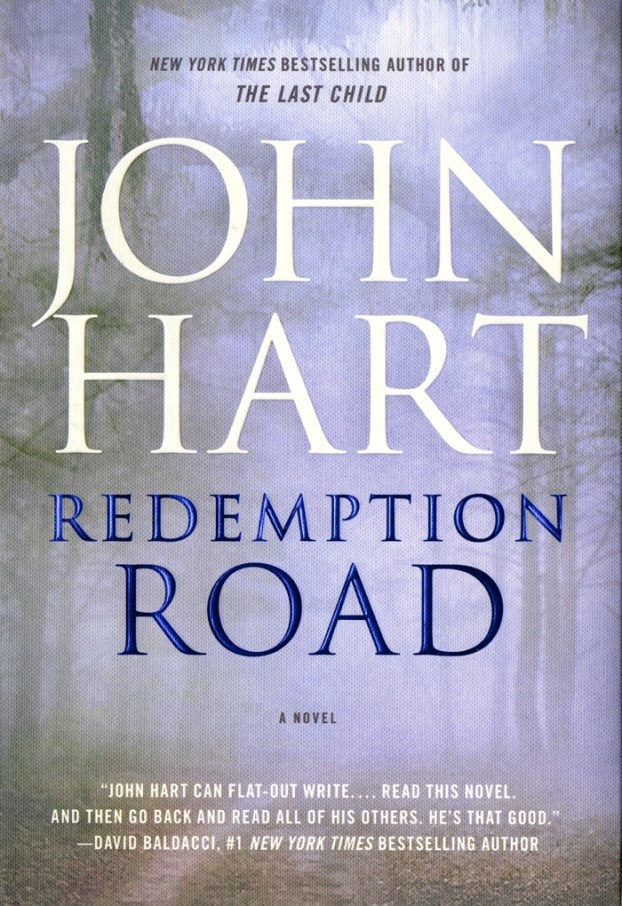 John Hart will sign his new book at Literary Bookpost on May 6, 5=8 p.m.

He is also featured in the May issue of Salisbury the Magazine, available at the Salisbury Post. Maybe the title should be “Relentless Road” instead of “Redemption Road.” John Hart’s new thriller is 400+ pages of pursuit, capture, torture, murder, accusation, cover-up and revelation, and it features a tough-as-nails female protagonist who takes nothing at face value.

Elizabeth “Liz” Black has learned to trust no one through bitter, horrifying life experiences. Trust in her preacher father evaporated long ago, and anyone else who earns her trust has to work damn hard for it.

Once a victim herself, Liz has incredible compassion for other victims. Her job as a police officer builds her toughness. Justice is what matters. And truth. When she discovers someone who has suffered because of lies or worse, she will work tirelessly, with pinpoint focus, to discover the truth.

Liz is so driven, readers will wonder if she’s lost her mind, if she’s finally crossed the edge from light into darkness. And there’s plenty of shadows in a prison cell, an abandoned church, a burned out home, a reeking basement

The novel opens with what appears to be a serial killer, though the motivation is murky. It continues with a cop wrongly convicted of murder, or so he says, a teen girl kidnapped and brutalized, and a boy out to revenge his mother’s death.

This cocktail of boiling emotions and volatile personalities is the perfect mix for an intoxicating plot full of twists, turns and subplots.

It’s hard to say much without giving away key points. Liz is the one officer who does not believe Adrian Wall, convicted of the boy’s mother’s murder, is guilty. To her, it’s a frame-up. The other officers begin to doubt her judgment.

There’s a flashy kidnapping, the daughter of one of the movers and shakers in this small North Carolina town. When Liz stumbles upon the scene, unthinkable things happen, and two men end up not just dead, but shot 18 times.

The kidnapped girl, Channing, is changed forever, and so is Liz. The SBI wants to take Liz down, to charge her with murder in the death of the kidnappers. But Liz has her mind made up about a lot of things, and she’s not going down without a hell of a fight.

She’s got to prove Adrian’s innocence first, protect herself, and somehow save the people she cares for, including Channing. Gideon, son of the murdered woman, is also one of those people, and when he embarks on a dangerous course, she has no idea, but she’s there when he falls and fails, further complicating her life.

Liz may be strong, but she’s on the run from so many opposing forces, not to mention her own demons, that everyone thinks she’s flying apart. Her battle must be fought on many levels, all of them personal. For a woman who has learned to turn off her emotions, they run deep, almost drowning her, putting her in dangerous situations. She pushes herself without letting up and never lets her guard down, which turns out to be the smartest course of action.

Hart introduces a few other characters — an aged Southern gentleman attorney named Faircloth “Crybaby” Jones, who is a voice of sanity in the chaos. You may recognize the stately home Hart created for him — or will you?

Hart draws several prison guards with a simple dark smudge, automated killers. We know they are without morals or remorse. A deeply evil prison warden oozes menace, almost too much to believe. The first man who ruined Liz’s life comes off  as fairly slimy, too.

Hart sets up plenty of suspects for his serial killer, and presents perfectly logical motives — if there is such a thing. Could it be the emotionally and physically damaged Adrian? Nevertheless, the deaths are chilling, enormously symbolic and carried out methodically.

When the reader does discover the killer’s identity, it is deeply distubing.

Of course, that person is not the only killer. Blood is spilled with regularity and there’s a lot of it. Add to that descriptions of torture to haunt your nightmares, and you come up with a sense of gloom that’s impossible to escape.

In other words, it’s an atmospheric Southern gothic thriller through and through. Hart writes of dark woods, deep secrets, damp heat and damned souls.

Hart’s pretty good at creating his first female protagonist. The only thing that stretches belief is her softer side. And when the story winds up, her choices — well, that’s certainly worth further discussion. And it sure leaves the door wide open for Liz to take us down another wild road.

Hart is already working on his next novel, and he’s excited about it. But it’s not about Liz. Prepare yourself.