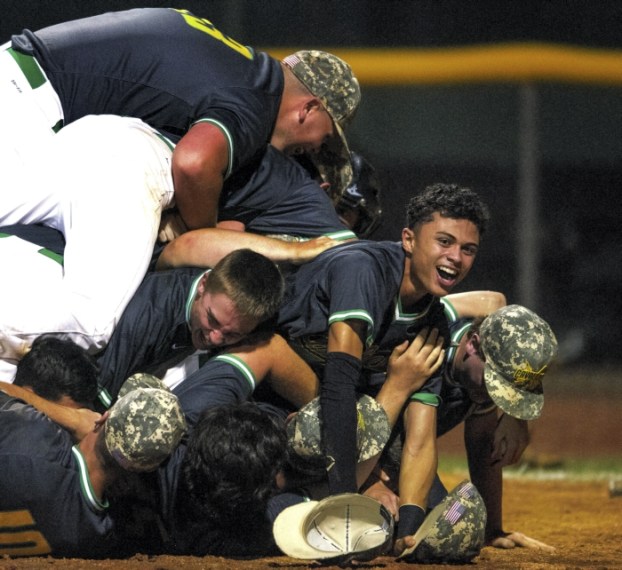 SALISBURY — Trey Stoner, Corbin Smith and Robbie Monroe turned a game-ending, 6-4-3 double play, and North Rowan’s baseball team dog-piled to celebrate a Central Carolina Conference championship.
North is always a basketball school, and it’s frequently a football school.
Occasionally the Cavaliers manage to put together a special baseball team, and this is one of those years. North (15-7, 9-1) has won eight straight games.
Friday’s 13-9 win against rival Salisbury gave North’s Aaron Rimer his first baseball title since he was a rookie coach in 2011 when the Cavaliers were in the 1A Yadkin Valley Conference.
It’s North’s first title in a 2A league since 2006.
“With the team they had and all those seniors they had, they were the league favorite and they probably deserved to win our league,” Salisbury coach Mike Herndon said.
A three-way tie for first was a possibility going into the final night of the regular season, but North scored four runs in the top of the seventh to pull the game out and finished two games ahead of Salisbury and West Davidson, a 4-3 upset loser to East Davidson.
“At times it wasn’t a normal baseball game because the umpire took it out of the hands of the pitchers,” Rimer said. “Both teams were crowding the plate, putting their toes right up on the plate. It got a little crazy out there.”
Teams don’t generally lose when they put up an eight-run inning, but the Hornets (11-13, 7-3) fell despite an insane, walk-fueled bottom of the third that threatened to last until May.
Relief pitcher Joe Harrison and clutch hitter Henderson Lentz did a lot to win the game for North, but the Hornets’ also suffered some self-inflicted wounds. There were costly base-running mistakes in the first and third innings.
Salisbury scored first against North starter Noah Gonzalez when Harrison Smith walloped a run-scoring double to deep center.
North’s five-run top of the third against Salisbury starter Griffin Myers was triggered by an error, but the Cavaliers also banged out five hits in the inning. Holden Lanier’s two-run double provided a 3-1 lead. Harrison drove in a run with a groundout, and then Steven Thurston’s two-out hit made it 5-1.
The bottom of the third lasted longer than some Hollywood marriages. The Hornets kept grinding out tough, determined at-bats, first against Gonzalez, and then reliever Lee Sells. Piecing together five singles, two hit batsmen, three walks, an error and a sac fly, the Hornets put eight on the scoreboard. Myers, Joe Steinman, Will Steinman and Alex Yang got consecutive run-scoring singles.
Bo Rusher would have had two sac flies in the same inning and the Hornets would’ve scored nine runs, but a baserunner, tagging up on Rusher’s second fly, was deemed to have left early.
Harrison relieved Sells in the third and benefited from that odd double play on Rusher’s fly.
That was the springboard, and he was lights out the rest of the game. He walked two and he hit a batter, but he struck out six and didn’t allow a hit.
“Joe made a great adjustment,” Rimer said. “The way Salisbury was crowding the plate, the fastball that was normally down the middle became a pretty good fastball inside.”
Harrison has been good all year. The lefty is 5-0 in spot starts and relief appearances.
“Everything was working,” Harrison said. “They were crowding the plate and I did what I needed to do. I just kept humming it in there. Coach is always telling us to want the ball — and I wanted it. That was the best moment I’ve ever had in high school athletics.”
Salisbury’s eight-run inning put North in a 9-5 hole, but Harrison gave the Cavaliers a chance to rally. North got three runs back in the fourth inning without a hit. There were three walks, an error and sac flies by Lentz and Monroe.
“Joe was battling on the mound and we were all battling,” Lentz said. “We got down by four runs, but we hung in there and got back in it.”
North scored the tying run in the fifth when Jake Pritchard walked with the bases loaded, but the Hornets kept it 9-all by throwing out a runner at the plate on Lentz’s fly ball to left field.
Harrison Smith relieved Myers in the fifth, and he kept North from scoring in the sixth.
But Gonzalez, who had made a diving catch in center field in the fourth, opened the seventh with a sharp single. After Brandon White was retired on a fly ball, Corbin Smith and Pritchard singled to fill the bases.
Lentz was next.
“He threw me a fastball and it was almost like the fastball that I hit to left field for the double play,” Lentz said. “The difference was this pitch was up a little bit higher and I stayed through the baseball better on my swing. Coach (Bill) Kesler has been working with me on that.”
Lentz hit the heck out of it for a two-run double to left-center, and North led 11-9. Two more runs scored when Monroe hit a ground ball, and the throw home sailed high.
Salisbury got the leadoff man on base in the bottom of the seventh, but Harrison got a strikeout, and then he got the double-play grounder that ended it.
“I was worried to death most of the game,” Rimer said. “I thought both teams did a good job of keeping their heads in a game where they could’ve lost them.”
North moves on to the CCC tournament as the top seed, while Salisbury’s five seniors will look for a strong showing in the tournament as well as the 2A state playoffs.
“We’ve made some strides from where we were when we started,” Herndon said. “We’re 11-13, but we’re a 2A team that’s played a 4A non-conference schedule. We competed hard tonight, and I was proud of that.”

From staff reports Carson’s baseball team pounded out 13 hits, including four homers, and rolled, 11-3, at Cox Mill on... read more