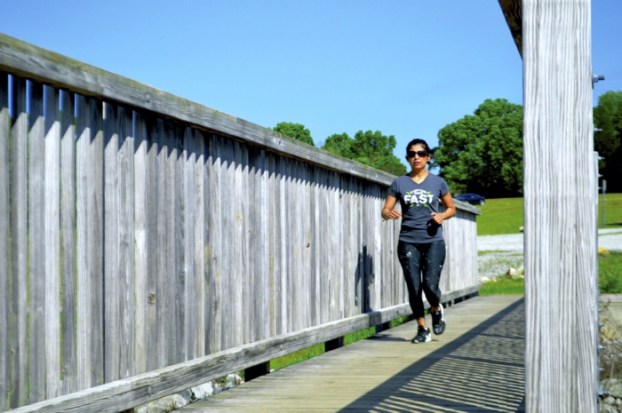 Florelay Brown runs at Salisbury Community Park as she prepares for the TWAM Mission Run 5K on Friday in downtown Salisbury. Photo by Emily Ford, for the Salisbury Post.

Why: Fundraiser for TWAM mission trip this summer to build homes for needy people in Mexico

SALISBURY — When she competed in her first 5K in 2012, Florelay Brown hadn’t run a race since middle school PE class.

A friend convinced her to participate in the Butterball 5K, held every year on Thanksgiving morning at The Forum of Salisbury.

Despite no training and showing up in what she described as the wrong clothes and shoes from top to bottom, Brown finished the race in 29 minutes and 58 seconds, or slightly faster than a 10-minute mile — a respectable time for many runners.

She was hooked. She signed up for another 5K, and this time she trained. She cut five minutes off her time. Since then, she’s run in dozens of races, shaving off a few more seconds or tenths of seconds. Her personal record stands at 22:30.

Brown, 34, will join more than 100 other runners Friday night in downtown Salisbury for the TWAM Mission Run 5K, a fundraiser for First Presbyterian Church’s Teens With A Mission summer mission trip to Mexico.

Brown encourages others to come out to the race, which she said raises money for a great cause. She participated in the TWAM 5K last year, crossing the finish line as the second-fastest woman overall. She praised the event as one of the most enjoyable and well-organized 5Ks in the area, with enthusiastic volunteers and a good, mostly flat course.

The 5K Run & Walk starts at 8 p.m. at First Presbyterian Church, 308 W. Fisher St. A special pre-race event — the Half-Mile Super Hero Fun Run that starts at 7:30 p.m. — encourages runners to wear their favorite super hero or character costume. The Fun Run costs $10, the 5K costs $20 (or $25 for those who register after Wednesday), and everyone receives a T-shirt.

Known as “the fastest 5K in town” and “Salisbury’s biggest door prize 5K,” Friday’s event will raise money for TWAM, a group of more than 30 teens and adults who will spend a week in San Antonio del Mar, Mexico this summer building homes for people in need in partnership with Youth With A Mission and Homes of Hope, said the Rev. Brian Daoust, director of Christian Education and Youth for First Presbyterian Church.

“This year, our race coordinator, Delaine Fowler, has coordinated our efforts with the Rowan Runners Club, the city of Salisbury, an expected over 150 runners from the area, and dozens of volunteers from our church and community,” Daoust said. “We are grateful for so many people coming together to support the event and serve those in need.”

All participants are entered to win more than a dozen door prizes from local businesses, including gift cards, gift baskets, running gear and more. The fastest runners in a variety of categories also will win awards.

Brown won’t compete for speed this year. A foot injury has slowed her to a trot, but she said she would not miss the TWAM 5K.

Running slowly goes against her nature. In just four years since her first race, she has become one of the most elite female 5K competitors in Rowan County.

“After a long day of work, I just feel good about running,” said Brown, who has been an assistant manager at Zaxby’s in Salisbury for 10 years. “It’s like therapy. I just feel better.”

And running for a good cause, like building homes for families in need, feels even better.