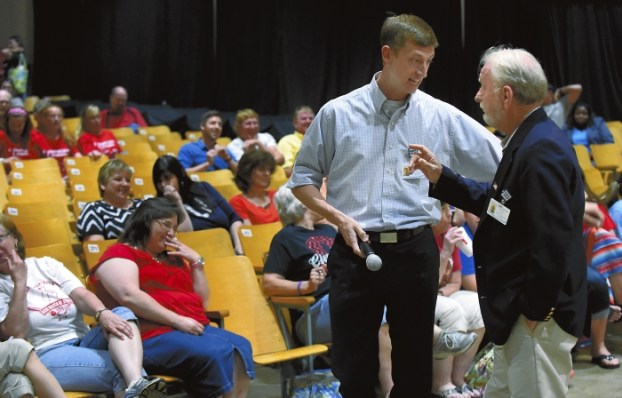 Wayne Hinshaw / for the Salisbury Post Rowan-Salisbury Board of Education Chairman Josh Wagner tells school board member Chuck Hughes to sit down while he was speaking. Discussions became heated Thursday night when the school board presented architect’s renderings of a proposed new western elementary school.

MOUNT ULLA — A Thursday evening meeting to discuss the possible merger of Cleveland and Woodleaf elementaries grew heated as both sides tried to say their piece.

The meeting, held at West Rowan High School, was the first community hearing the Rowan-Salisbury Board of Education has held to discuss the issue since it chose to move forward with the merger in 2013.

The location of the proposed school, at the intersection of N.C. 801 and Godbey Road was a point of contention for community members.

Seth Waller said he grew up at the that intersection, and called the crossroads “dangerous.”

Waller said there was a hill right before the intersection, and the route is traveled by quarry trucks and tractor-trailers, adding the hundreds of cars that would pass through the intersection if a school was built there would turn it into “a ticking time bomb.”

Residents also voiced concern at the parcel’s proximity to Southern Power, a natural gas plant less than a mile from the proposed school site. Mary Hines cited an explosion and a fire that occurred at the plant the previous week. She said the explosion could be felt from several miles away.

Speakers also questioned the length of bus rides. Transportation Director Tim Beck said that routes to the new location would only be 15 minutes longer for some students. However, the crowd expressed doubt. One mother from Mt. Ulla said her daughter spends more than an hour and a half on a bus to get to West Rowan Middle, and questioned how long rides would be for Mt. Ulla students if they were sent to the proposed new school.

Cleveland Town Commissioner Travis Summit questioned the board’s desire to save money, citing a parcel the town had offered that would have saved nearly $1.2 million.

“I understand the concept of saving money, I really do . . . but do we put our kids first, or do we put our pocketbook first?” He asked.

Former county commissioner candidate and local businessman Chris Cohen criticized the board for not involving the community earlier, and for considering a plan that could close all three western elementary schools.

And when the allotted three-minute time limit was up, Cohen kept talking, pointing out that nearly all the firms hired for the proposed school, as well as the Wallace Educational Forum, were from out of county.

“Thank you Chris,” Board Chairman Josh Wagner said after the timer went off.

When Cohen did not leave the podium, Wagner left his seat, approached Cohen, and turned off the microphone. Cohen kept speaking. When he finished his pre-written statement, he returned to his seat amidst applause from other community members.

Other speakers brought up the size of the school. The proposed building has a core capacity of nearly 800 students, Thomas Hughes with SfL+a said in a presentation before public comment. Parents objected, saying that students performed better in smaller schools.

“This may be a financially wise decision, that’s up for grabs, but it’s definitely not educationally wise,” parent Stephanie Smith said.

Others questioned why the board decided to close schools as an answer to maintenance issues.

“We need to discuss what needs to be fixed, not closing schools . . . The taxpayers will meet you with resistance,” Mike Lyerly, a parent from Morgan Elementary, said.

“At this point, we call into question everything we thought we knew,” he said.

Paris asked if the board had thought of buying a separate plot of land, digging a well there, and piping the water in if no wells at Woodleaf were viable.

Other speakers offered solutions for the Godbey Road property should the board push forward, despite community dissent. Several said a traffic light, stop signs or an underpass should be built at the location. One speaker recommended building a blast wall between the school and Southern Power.

After public comment, the board commented and the conversation again grew heated as members of the crowd shouted out questions and comments. Five of the seven board members attended — members Jean Kennedy and Dr. Richard Miller were absent. Wagner thanked the speakers for their honesty, but he and other board members said they’d had a lack of feedback during the entire process — the merger has been discussed in open meetings by the board since 2013, Wagner said.

“I’m probably the least politically correct board member so I’ll tell you real quick ‘cause I’m angry. I want to know where you were at a year ago, when we started working on this,” board member Chuck Hughes said.

“We were working!” Someone from the crowd said.

Hughes said that the consolidation of Cleveland and Woodleaf was a “must,” but the other four schools were just up for consideration. He again asked where the community had been a year ago.

Hughes argued the board’s point and said the merger was a “positive” thing, and that the schools were only getting older. Hughes said the board would take back concerns raised at the meeting for consideration.

As people continued to call out questions and comments, Wagner came up and took the microphone from Hughes.

After the meeting Hughes said he and the man in question were just having a conversation.

Wagner used to time to try and answer some questions, stating that the board would not be able to address every question at the time.

Wagner also said school system officials had spoken to the Department of Transportation about putting in a traffic signal, and the department had, from what he understood, had recommended no action be taken.

“I’m just giving you the information,” he said, addressing speakers’ expressed doubt about the validity of information presented, “so my point is, if all you’re going to say is you don’t believe that, then what are we here for? Why did you even come? All I can tell you is the truth.”

Wagner explained the school’s financial situation, and said the board felt that consolidation was the best option. The system has more than $30 million in immediate maintenance needs, he said, but only receives $2 million from the county each year for capital needs.

Wagner addressed several more concerns from the audience and encouraged those who stayed to come speak to individual board members. The meeting adjourned amidst more questions called from the crowd.

By Susan Shinn For the Salisbury Post Those savvy Southern gentlemen are back in high cotton. High Cotton, a men’s... read more