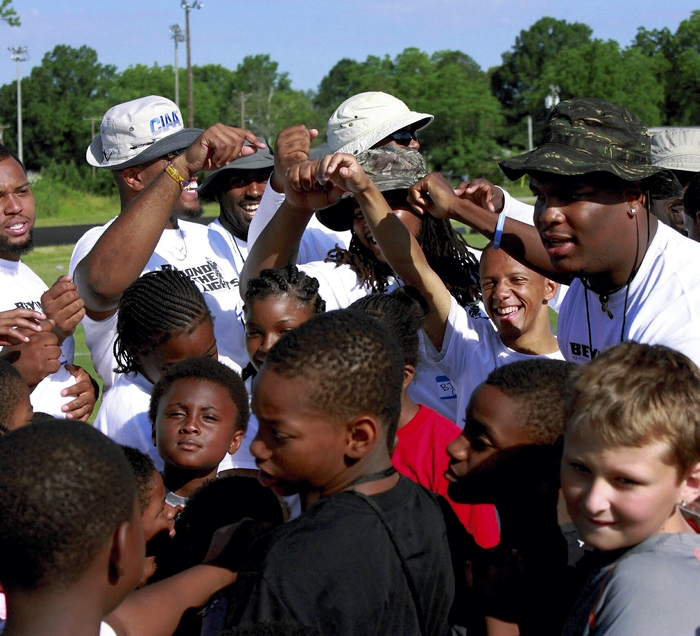 Submitted photo Scotty Robinson is bringing back his Beyond the Lights youth football camp for its second year on May 28 at Salisbury High School. He said that while last year at this time there were 50-60 children pre-registered, there are already 350-400 pre-registered for this year's camp.

SALISBURY — Scotty Robinson, an alumnus of East Carolina University and former professional football player, is bringing back a free football camp for local children and teens for its second year.

Robinson has teamed up with city Councilman Kenny Hardin and other community members to host the Beyond the Lights Football Camp, a free program to help children with their football skills before the school season starts.

Children, from 5 to 17 can attend the event on May 28 at Salisbury High School at 500 Lincolnton Road. Same-day registration will begin at 7 a.m. and participants can pre-register at beyondthelightsfootballcamp2016.eventbrite.com.

Girls from the ages of 5 to 12 are welcome to play football, which will be non-contact and this year the program also features a cheerleading camp for ages 5 to 14.

Breakfast from Bojangles’, a sponsor of the event, and lunch will be provided.

Other ECU alumni will be guest speakers for the event and representatives with fitness businesses will also help out. Unlike last year, this year’s event will be over two days. Children and teens will be the focus on the first day and there will be an alumni flag football game on the second day.

Robinson was born and raised in Salisbury and was labeled as a “troublemaker” at a young age.

He said football was his “ticket out.”

“Football has always been one of those things that — I always say, it was a platform that led to a much better life for myself and my family,” he said.

Robinson received a full scholarship to East Carolina University and played football for the school’s team. He went on to play in the NFL for the Cleveland Browns and the Canadian Football League. He also played in the Arena Football League, for teams that included the Tulsa Talons, Georgia Force and the Philadelphia Soul.

Robinson said he was welcomed in Salisbury “with open arms” when he moved back to the area around 2011.

He knew he wanted to do his part to make the community a better place, so he created the Beyond the Lights Youth Services.

“I’m just like every other kid around here that is labeled as something and it just takes someone putting a little time and effort into them to really bring out the best in them,” he said.

Children and teens of all backgrounds are welcome.

Although the football and cheerleading camp will be preparing participants athletically, Robinson said there is so much more to the event.

“I want to use (football) because that’s what’s going to get the kids interested, but at the same time the camp has nothing to do with football,” he said. “We deal with real-life issues.”

Robinson said he knows not every participant will go on to be a football star, so he wanted to be sure that everyone could get something out of the event. Coming from a single-parent household, he said there were times when he felt alone.

“I know that feeling and I despise that feeling. I want to make sure for one day, that no kid out there is going to feel that way,” he said.

Councilman Hardin said Robinson’s excitement about the program rubbed off on him when they met to talk about it. He said he wanted to do whatever he could to help.

Last year, Robinson organized the event mostly on his own. This year, Hardin and other volunteers have formed a committee to make the camp a success.

The work is already starting to pay off. Robinson said there is more excitement this time around. While last year at this time there were about 50-60 participants who pre-registered, around 350-400 have already pre-registered for this year’s event.

“Now, it’s nothing new; we know what’s going to come from this camp,” he said.

Robinson said no one who wants to participate in the camp will be turned away.

Financial donations have also been coming in. Hardin said six hours after a message about the event was posted on social media on Tuesday they raised almost $1,000. About $1,500 has been raised to date.

The football camp will be the first of more events to come. Robinson is planning a Beyond the Lights ambassador program that will help students with personal development and academic excellence. They will also take the students on college visits and trips to places like Washington, D.C.

“We have to show (the kids) that they can dream beyond the borders of their community,” Hardin said. “…But we have to help them dream and help them achieve that.”

Robinson said the number of children and teens that show up could be twice the number of those who pre-registered, so he needs the community to volunteer their time and resources.