The heart of it: South Rowan club donates to community 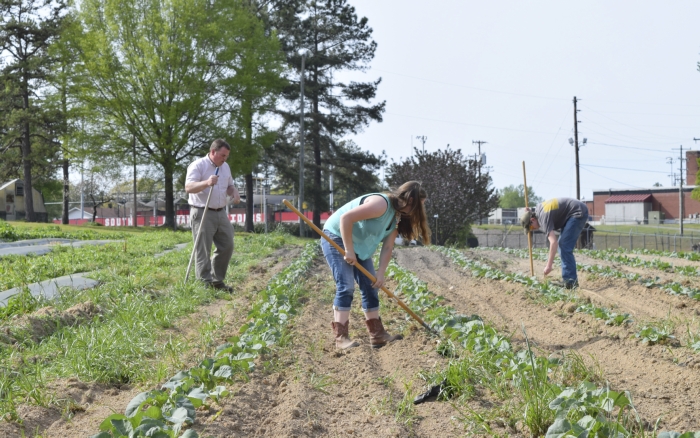 LANDIS — It’s a sunny spring afternoon as members of the South Rowan Future Farmers of America club work on their 13-acre land lab bedding sweet potatoes. Some of the students have kicked off their shoes, digging their toes into the dirt as they place last year’s potatoes into a long row. The tubers fit like puzzle pieces.

When they sprout, agriculture teacher Laura Allen explains, they’ll be transplanted to another plot.

South Rowan’s FFA has more than 200 members, and the land lab has green houses, a nature trail, a chicken coop, a pond, a barn with three adult goats and a pasture with two cows.

“There’s lots of stuff to do up here,” agriculture teacher David Overcash said.

But South Rowan’s Future Farmers isn’t just a school club – it’s part of the community. The club runs one community service project a month – they may read to younger students, ship off military boxes, or adopt a highway.

Five years ago, with the awarding of a grant from the National Future Farmers of America, they began donating produce. The Food for All grant is a yearly grant that provides the club with $2,500 for seeds and supplies. In return, they donate almost all of their produce.

“Both of those groups affect people in the school or are connected to this school,” she said.

The grant’s goal is to get fresh, healthy foods into the community, and it also teaches the kids to give back to their community. And it’s a big hit with the kids.

Eller, a senior, fell in love with the land lab when he took a tour of the property in eighth grade.

“I was just wowed when I saw all the stuff they have up here,” he said.

The property lies just off Kimball Road, adjacent to the school. For a lot of students, it’s their first time being exposed to farming. It’s a change from when Allen was a member of the South Rowan Future Farmers of America, when a lot of the students were from farming families.

“Now we’re having to teach kids what agriculture is,” she said.

The students work in fields, planting plugs, hoeing weeds and growing broccoli, squash and cantaloupe, or look after the chickens and animals if they’re taking animal science classes. Kids can even dabble in experiments and research with the club’s strawberry patch. To kids who have never been on a farm before, growing things can be a kind of magic.

“When you’re putting the plants in the ground, even the students can’t visualize what they’ll look like,” Overcash said.

And even if they have no intention of going into farming, the knowledge is still valuable – whether they remain consumers or choose to grow their own food.

“Everybody’s going to have a yard or a pet they want to care for some day,” Allen said.

The club also offers students a chance to research, polish their leadership skills and to shine in contests and events.

To one side of the sweet potato field the club’s officers stand, practicing for a public speaking event they’ll be attending later in the year.

“They’re learning life skills whether they realize it or not,” Allen said

While the school’s club is old – South Rowan has had a Future Farmers of America since the spring of 1962 – Allen said it’s the students, who are willing to get outside and get their hands dirty, who are the heart of it.

“Without them, none of this exists,” she said.