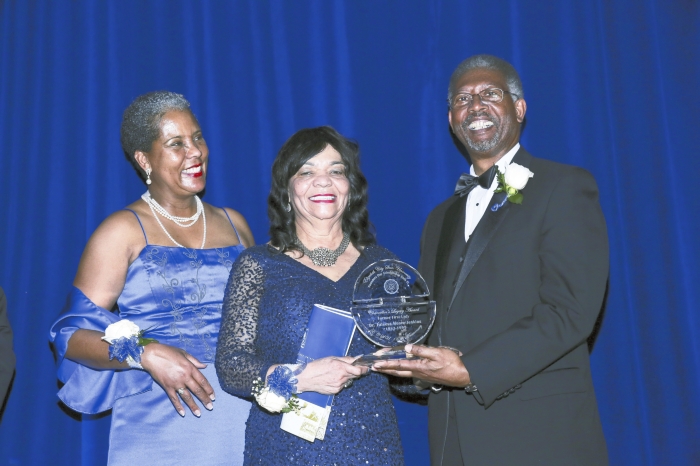 ELIZABETH CITY – When she was a student at Elizabeth City State University, Faleese Moore had no way of knowing she’d one day return to her alma mater as its first lady.

But that’s exactly what happened.

She married her college sweetheart, Dr. Jimmy R. Jenkins, Sr., who in 1983 became the first ECSU alumnus to serve as chancellor and is now president of Livingstone College. Last month when ECSU celebrated its 125-year anniversary, Dr. Faleese Moore Jenkins joined four other first ladies at its ninth Founder’s Day Scholarship Gala, where they were honored as Chancellor’s Legacy recipients.

Jenkins and the other women were recognized for their contributions and support of former chancellors who led the university.

“This year’s gala was significant because we are celebrating the university’s 125th anniversary and we recognized the former first ladies,” said Victor Moody, a member of the ECSU Foundation’s board of directors, in a prepared statement. “It was really special to welcome back former chancellors as well, who returned to share this occasion.”

Jenkins said she enjoyed the formal, two-hour event, which was festive yet cosmopolitan and which was akin to a homecoming.

“It was very euphoric to go back and to see the people there,” Jenkins said. “Some of my former students, people I taught when they were in kindergarten, were there. I also saw parents of those students, as well as former colleagues and close friends. It was very special for me to be able to participate in and enjoy such a wonderful event with my life mate.”

Jenkins is used to attending important events, and she has certainly participated in her share of fundraisers. Her husband has been the chief executive officer of three institutions of higher learning. Besides Livingstone, where he’s been president since February 2006, he was chancellor of ECSU and president of Edward Waters College in Jacksonville, Florida.

But if you think Jenkins has been content to simply be a first lady all of these years, think again.

At Elizabeth City State University, she was a math specialist in General Studies before becoming director of the Laboratory School while working as an associate professor in the Education/Psychology Department. She also oversaw student teachers in The Elizabeth City-Pasquotank Public Schools.

At Edward Waters, she was director of teacher education and instituted a College for Kids, a Saturday afternoon lecture series featuring prominent African-Americans.

Since coming to Livingstone College, Jenkins has focused on volunteerism in various capacities, such as advising The Bridge Program and serving as an education consultant. She regularly attends functions at Livingstone, and off campus, to support her husband. She’s also an “unofficial” associate coach of the men’s basketball team, which earlier this year lost its bid to “three-peat” as Central Intercollegiate Athletic Association champions but has vied for the title five of the last six years.

“Dr. Faleese epitomizes the meaning of a true fan,” Stinson said. “She never wavers in her support of our program, and she always knows the right thing to say, especially when the coaches and players need encouragement. During home games, I know I can count on her being in the stands behind the bench cheering us on. If she’s not at a home game, she’s either under the weather or out-of-town. Dr. Faleese is, bar none, our staunchest supporter.”

Of course, no one has been on the receiving end of Jenkins’ loyalty more than her husband, with whom she celebrated 50 years of marriage last September, and with whom she has three children and seven grandchildren. The president is quick to acknowledge he wouldn’t have been successful at three historically black colleges and universities without her.

“My wife has been with me since I was a public school teacher in Maryland, long before I assumed my first chancellorship at Elizabeth City State University,” he said. “A successful educator in her own right, she has been responsible for instructing countless students for many decades, and she’s been right by my side when I’ve had to make some really tough decisions at the institutions where I’ve served as chief executive officer. Knowing I can count on her for sage advice and unequaled support has been very comforting to me over the years. I’m glad the administrators at ECSU recently recognized the accomplishments she made while serving as their first lady. She was deserving of that award and will be of any awards yet to come her way.”

Jenkins earned her bachelor’s degree in elementary education from Elizabeth City, before earning a master’s degree in special education from Old Dominion University. She also earned a certificate of advanced graduate studies and doctorate in educational administration, both from Virginia Tech.

Jenkins. While handling her first lady duties, she also helped rear three children, served several stints as PTA president and was president of Jack and Jill of America, Inc., earning Mother of the Year honors from the Elizabeth City chapter of Jack and Jill. And as if all of that wasn’t enough, she also studied toward and earned her doctorate while serving as first lady.

In her spare time, Jenkins enjoys surf fishing, gourmet cooking and working out. She and her husband are members of Mount Zion Missionary Baptist Church in Salisbury, and Jenkins,

who has traveled the world and met several sitting U.S. presidents, has made a difference in countless students’ lives. Her prayer now is that she is a positive role model for her seven grandchildren, who range in age from three months to 13 years.

“Teaching is one thing, but the way you live is what kids really emulate,” Jenkins said. “It’s not so much what you tell them but instead how you live your life because that’s what children pay attention to. I strive to inspire them to do well in school, to treat people fairly and to always work on self-improvement. That’s what we taught our kids, who are all very successful and have made us proud, and now that’s what we’re trying to teach our grandchildren.”