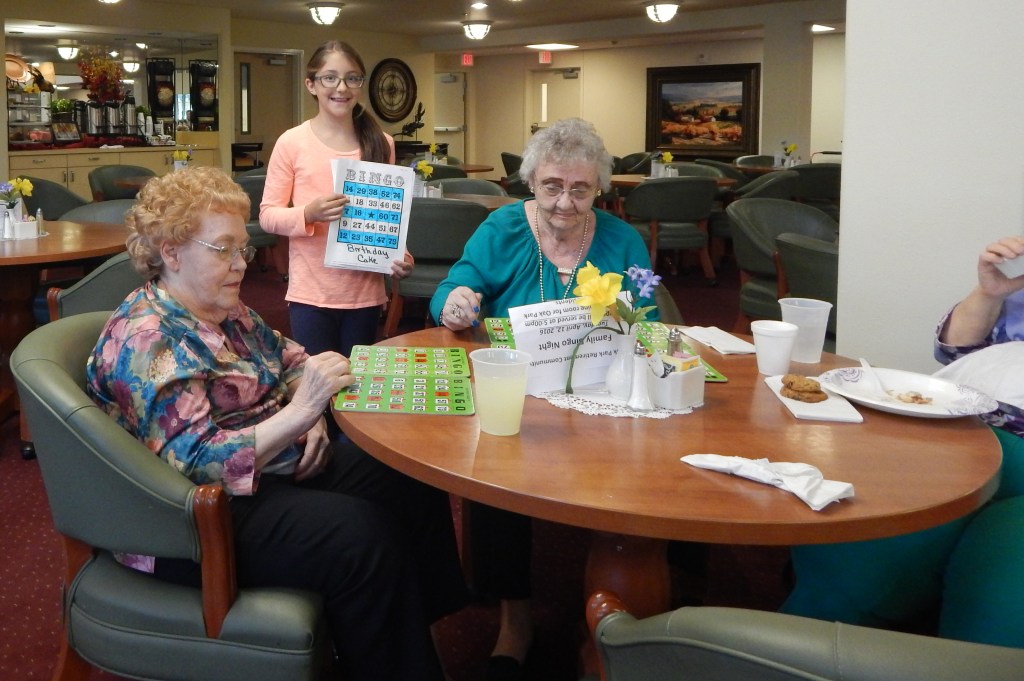 LEAP student Bailey Zino delivers bingo cards to Oak Park residents Irene Moeller, left, and Rose Freehoff. ‘Our Oak Park residents have given so much heart and love to the butterflies that it is rewarding to them to see the students so empowered,’ said Karen Leonard, activity coordinator for Oak Park. Submitted photo

SALISBURY — You could almost feel the butterfly flapping its wings when Karen Leonard, activity coordinator for Oak Park Retirement, called Salisbury Academy teacher Katie Skalka. Would Salisbury Academy be interested in taking part in the butterfly effect — a social movement proving that a small act of kindness can be a catalyst for great positive change — Leonard asked over the phone.

For Skalka and her students at the academy, the timing of Leonard’s outreach could not have been more perfect. Salisbury Academy’s middle school students have the choice between several different electives, called exploratories, which meet for 40 minutes once weekly. Skalka was two weeks into an eight-week LEAP (Leadership with Action and Purpose) exploratory, and her students were in the process of finding an organization with which to get involved.

“LEAP is a service exploratory meant to teach students how to partner with and serve local agencies, and ties very naturally into the butterfly effect and its purpose,” said Skalka.

The butterfly for Salisbury Academy, passed on from Oak Park and Ralph Ketner, came in the form of fifty dollars to use towards making a positive impact. Ketner and Oak Park had also recently given a butterfly to Catawba College, where students involved ultimately decided to repaint the break room at Rowan Helping Ministries.

When Leonard and the 22 Salisbury Academy LEAP students ages 10, 11 and 12 met for the first time to brainstorm how to use their butterfly to fundraise for a cause, the students asked what activities Oak Park residents enjoy.

Salisbury Academy students met with Leonard and her team of resident bingo coordinators over the course of several weeks to plan the event. They decided as a group to use their proceeds to further outfit the Rowan Helping Ministries break room that Catawba students had recently painted.

Outside of the planning meetings, LEAP students did everything from making flyers to contacting donors for food and raffle basket items to writing letters to their peers asking them to bring in donations for the raffle baskets.

“It was just very cooperative, and it felt very easy,” said Skalka. “The students’ shared vision was just so strong.”

On the night of April 12, bingo night came to fruition. Some LEAP students made change as guests paid their $10 for a meal and bingo card, while others served food and drinks to the bingo players. Meanwhile other students settled in next to Oak Park residents to play a good, old-fashioned game of bingo in good company.

“It was a really fun night,” said fifth grader Gigi Nagy who served lemonade and played bingo with the residents. “It feels really great to know that you’ve accomplished something.”

Oak Park’s staff and residents made great contributions to the bingo fundraiser as well and raised $1,500 to add to the $565 raised by Salisbury Academy’s LEAP students for over $2,000 in total proceeds. Of the $1,500 raised by Oak Park, $1,000 was contributed by an anonymous donor, to be put towards the butterfly effect.

“We can do much more when we work together and have community involvement,” said Oak Park resident Anne Hollifield. “It is a good feeling knowing you have helped fill a need.”

For fifth grader Brooklyn Albanese and many of her fellow LEAP peers, the butterfly is still flapping its wings. Albanese is in the process of coordinating visits to Rowan Helping Ministries during which Salisbury Academy students will sing for visitors to the shelter.

“If you really pay attention to what’s going on around you, you can realize that there’s something really big happening,” said Albanese.

Witnessing the students making those critical connections and taking ownership of their service project brought great satisfaction to both Leonard and the Oak Park residents, she said.

“Salisbury Academy took the butterfly challenge to the highest level by empowering their students with leadership and embracing that the sky is the limit when you think outside the box,” said Leonard.