Heart of a champion: Jim Baird recovers from heart surgery in time for Senior Games 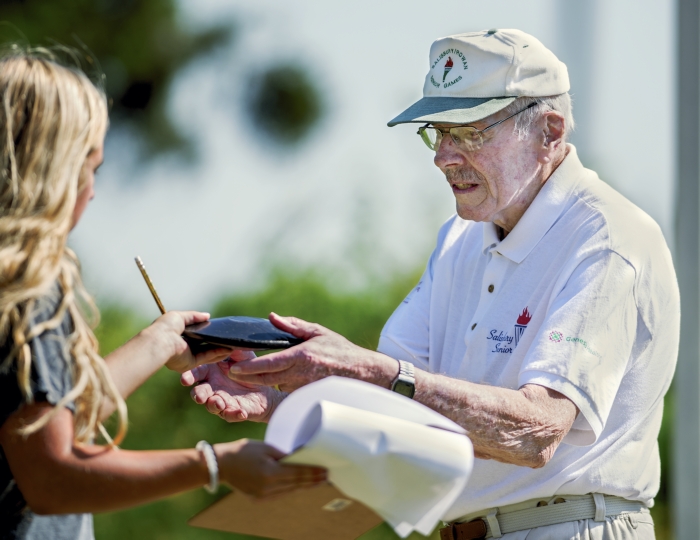 SALISBURY — Jim Baird, 87, walked up to the edge of the shot-put circle to throw the ball during the field events at Livingstone College on Tuesday.

Training for the event, Baird didn’t have anything like the shot-put balls, which weigh around eight pounds, to practice with, so he decided to train with one-gallon water jugs.

“I’m not sure if it did anything, but it kind of made me feel like I was doing something,” he said.

He bent his knees and threw the ball as he popped back up. His best throw was 10 feet and 4 inches.

Baird competed in the Senior Games after recovering from open-heart surgery.

Baird has been competing in the Senior Games for 15 to 20 years. Along with shot-put throwing, he also participates in the discus, softball and football throw, spin casting, bocce, cornhole, croquet, horseshoe toss, shuffleboard and putt-putt.

He said the games helps him stay in shape and the event has a fun social aspect.

“It’s good camaraderie and everybody is really friendly, and it’s a good time,” he said.

On August 27, 2015, Baird had an aortic valve replacement and a bypass operation done on his heart.

While at Novant Health Presbyterian Medical Center in Charlotte, Baird said he suffered from infections that kept him in the hospital for nine weeks.

“I couldn’t talk for two months with all the tubes and stuff,” he said. “It was quite an ordeal.”

Carolyn Serpe is Baird’s daughter. She and her husband came down to visit Baird and watch him during the games.

“It wasn’t good for a while,” she said, remembering all the time Baird spent at the hospital.

Serpe said she asked her father what he was thinking while he was unable to talk.

Serpe said Baird was very weak at first. She said she would encourage him to do small arm exercises while lying in bed. They tired him out so much that he would have to take a nap afterwards.

“When you lie in bed for even a week, you become so weak,” Baird said.

The health problems did not keep Baird down for long. He started performing speech, breathing and muscular and other exercises at Autumn Care of Salisbury.

“I can’t say enough for all of these places that I was for therapy. They’re so good and they’re so caring,” Baird said. “It’s almost like they’re family. They really take care of you.”

Serpe said the family took Baird back to the hospital and rehabilitation center to show his progress to the nurses and therapists.

“They were very grateful, the ICU team. Most people don’t do that,” she said. “They all were in tears to see him standing and walking.”

Baird said once he was better he wanted to get back to his normal routine, and for this time of year, that meant the Senior Games.

The mission of the Senior Games is to “keep seniors active, independent and healthy,” said Phyllis Loflin-Kluttz, Senior Games and Silver Arts coordinator for the Rowan County Parks and Recreation Department.

She said there are 53 local games in North Carolina and Rowan County’s Senior Games is the second largest. In terms of the largest in participation for the year-round program, Rowan County takes first place.

Loflin-Kluttz said there is something for everyone in the games. There are team sports like softball and basketball, along with events like pickleball, shuffleboard, golf and table tennis.

There is also the Silver Arts program, during which participants compete in literary, visual, heritage and performance arts events.

Serpe said Baird won a gold medal for a woodcarving piece he submitted in the Silver Arts program.

“He submitted a really neat piece. It was a man holding back the water … like pushing against the forces of life,” she said.

Loflin-Kluttz said the games act as a qualifying competition. Those who receive high enough scores go on to compete at the state, regional and national levels.

She said most of the competitors have some kind of health problem, but the events encourage them to stay active.

“Any movement that we do is good for us,” she said, from throwing a discus to carrying out the garbage.

This year, the age range was extended to include seniors ages 50 and older. Participants previously had to be at least 55.

Participant Renita Ritchie said she got involved as soon as she turned 55. She used to work in the Parks and Recreation Department with Loflin-Kluttz and has been involved with the Senior Games since the beginning.

She said she competes in most of the events to keep in shape and have fun, but when it comes to softball and pickleball, she’s in it for the competition.

Ritchie said some people may not think they can participate because they have aches and pains, but so does everyone else.

“You don’t have to be in the shape you were in when you were 20 to compete,” she said.

Serpe thanks God, the therapists, nurses and doctors who worked with her father, and Baird’s local church, Milford Hills United Methodist Church, for Baird’s recovery.

But it was Baird’s determination that impressed her the most.

“Some people, with what he went through, could just say, ‘Well, forget it.’ Even though he was pretty much near death — at one point they told me he would never eat again — he defied all the odds and proved them wrong,” she said.

Baird said he looks forward to the games every year and encouraged other seniors to get involved.

“Try it,” he said. “Try your best. Put your best foot forward and you may surprise yourself.”

The Senior Games will continue with billiards at 10 a.m. at building six of the Hefner VA Medical Center and pickleball at the East Rowan Y at 11 a.m. on Friday.