A day for thanking military veterans: ‘There ought to be more people doing it’ 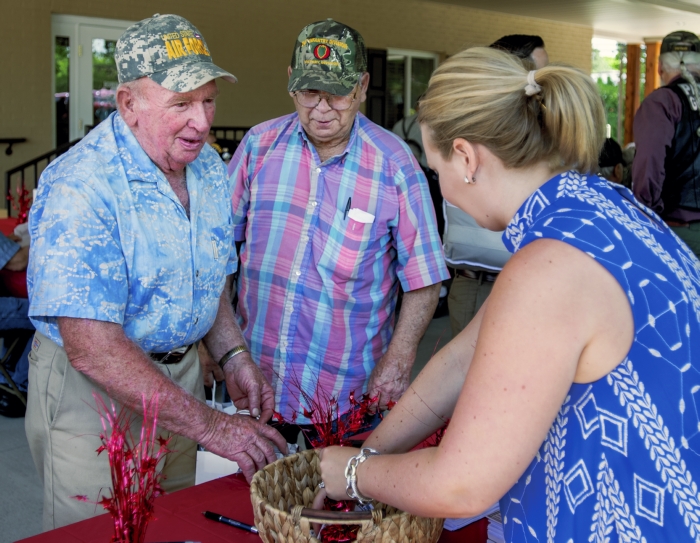 Ben Agner, left, and Bill Waller, both of Salisbury, register for the free grill and accept their free goodie bags from Charlotte Staton during the Veteran Appreciation Day held by Powles Staton Funeral Home in Rockwell on Tuesday. Allison Lee Isley/Salisbury Post

ROCKWELL — Army veteran Ronnie Fesperman had everything he needed — a hot dog all the way, a can of Cheerwine and a Moon Pie. He had registered for the grill being given away, and he was having good conversation with the guys at his table.

“I don’t think they can shine these sandals,” he said, looking down at his feet.

Sitting next to Fesperman was Gregory Pine, who confirmed he also was an old Army man.

“Is there any other (branch of the service) ?” Pine asked.

“Yes, there is,” Rick Starnes said, pulling up a chair.

Starnes, a Vietnam veteran along with Pine, spent 31 years in the Air Force and Air Force Reserve. He retired from both Duke Energy and the Reserve in 2007.

Starnes had spent three years total in all of the hotspots in the Middle East, and the others at the table were impressed when they learned Duke Energy had kept paying his salary while he was fighting for the country.

Starnes talked of the golden sunsets in Oman, the mud and dirt of Iraq and the rock and dirt of Afghanistan. Sometimes in the desert you would shower and you’d be covered in dirt and sand within moments of leaving, Starnes said.

It reminded Pine of being out in the bush in Vietnam for eight months and arriving at an Air Force base, going to the NCO club and seeing flush toilets and real urinals on the wall.

They were beautiful things after eight months of “peeing in a tube,” Pine said.

Starnes was having two hamburgers from the Hot Dog Shack’s mobile unit, which was providing the free food for the veterans.

“This is lunch and supper,” Starnes said, and he had every intention of getting a shoeshine.

Starnes said what Powles Staton Funeral Home provided for the veterans Tuesday was wonderful and he wishes American military personnel returning home during the Vietnam War had been treated as generously.

As is common these days, many of the military veterans who show up for veterans-related events are from the Vietnam era, with some veterans of Middle East conflicts mixed in.

Jim Deal, 93, who served in a tank battalion in Europe, thinks he was one of only two World War II veterans in the good-sized crowd Tuesday.

“This is a wonderful idea,” Deal said. “We want to thank Powles Funeral Home for all the work they do for veterans.”

Powles Staton Funeral Home also offered massages provided by Barry McCall of the Jeter Chiropractic Clinic. There was information on the Salisbury National Cemetery, gift bags, disposal bins for used American flags and a place where veterans could drop off gifts for Operation Toy Soldier.

The Veteran Appreciation Day was the idea of Russ Roakes, who works at the funeral home.

“I said, My God, let’s run with it,” Will Staton said after Roakes first offered the suggestion.

“We just like to give back to our community and, of course, our veterans,” Roakes added.

Jason Smith, owner of the Hot Dog Shack in Granite Quarry was “awesome to work with,” Roakes said. Leonard Wynn, who is usually stationed at the Made Man Barber Shop in Salisbury, provided the shoeshines.

Roakes acknowledged the funeral home had no idea what size of crowd it should plan for —  was it going to be 10 veterans or 200? The event, held between 11 a.m. and 2 p.m., looked as though it attracted several hundred.

Dining was set up in the shade under the funeral home’s carport.

Harold Rinehardt, a veteran himself and father of Mitzi Poole, who also works at the funeral home, brought his classic 1957 Chevrolet and 1957 Thunderbird for the crowd to appreciate.

“I think it’s fantastic,” Vietnam veteran Kirby Ritchie said. “It really is kind of different from when we came home. People threw rocks at you then.”

Dale Carter, of Gold Hill, agreed. “Everything honoring vets is good,” he said. “There ought to be more people doing it.”

Yesterday: Students from Frank B. John School in 52-53