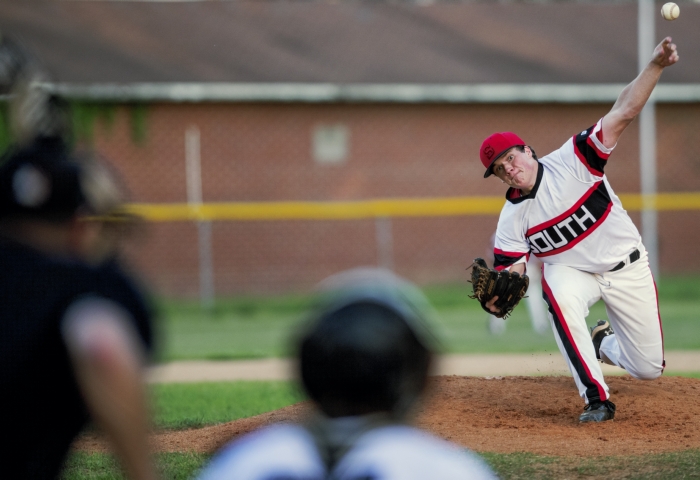 LANDIS — South Rowan coach Thad Chrismon has sent lefty Blake Johnson to the mound often over the last three seasons.
Chrismon knows there are two givens with Johnson — a bulldog effort and a lot of strikes.
Usually, Johnson also is going to get a win. The Belmont Abbey signee shut out Robinson for six innings and keyed South’s 7-0 South Piedmont Conference victory on Tuesday.
As SPC games go, this one was relatively tame. Johnson gets the blame.
“I thought we had some great at-bats against a good pitcher,” Robinson coach Damon Whalen said. “But it’s all about timely hitting. It’s not enough to get the guys on. Somehow you’ve also got to get them in.”
Johnson was a lot tougher when Robinson had men on base than when the Bulldogs didn’t.
Robinson (7-12, 7-10) had leadoff hits in the third, fourth, fifth and sixth, but no one ever crossed the plate.
“I kept it low consistently,” Johnson said. “We played great defense tonight, especially (shortstop) Peyton Penninger. When we play defense like that, it makes it easy on a pitcher.”
Johnson is 5-4 this season. The win was the 17th of his varsity career, the most anyone’s had at South since Andrew Morgan racked up 18 early in the century.
“Blake had some great innings tonight,” Chrismon said. “Fifth inning, they got a leadoff triple (by Seth Johnson) and they still didn’t score. Blake worked out of it with a strikeout, a ground ball to third and a fly ball, and it was like we stole a run from them. Stealing a run like that can be just as important as driving one in.”
Penninger made one outstanding play and one supernatural play. The mind-boggler came in the second when he fielded a ball very deep in the hole and got the out at first with a Jeterish one-hop throw.
“What was impressive about that play was his presence of mind,” Chrismon said. “The key was getting ride of the ball so quickly. He got rid of the ball fast and the throw was strong enough.
Robinson pitcher Jarrett Smith got off to a solid start, but South got to him for six runs in the third inning. Shaggy Wyatt’s one-out walk started a merry-go-round. Dawson Larrimore’s single put two men on, and Tyler Rary smacked a double to the fence in left-center for a 1-0 lead.
“That pitcher was in the strike zone, and I found one I liked,” Rary said. “I don’t know if I’ve ever hit a ball harder.”
Smith struck out Bo Corriher, who had tripled his first time up, for a big second out and it appeared he might escape the inning down only 1-0. Johnson got behind in the count against Smith but fought back. Johnson walked on a close 3-2 pitch that just narrowly missed the inside corner.
“Well, I thought it was a ball,” Johnson said with a smile. “It wasn’t like I was going to argue with the umpire to try to change his mind.”
That walk loaded the bases with two men out. Whalen felt that ball four to Johnson was the pivotal pitch in the game.
“That was a 50/50 pitch, and if we get it, we’re batting and we’re only down 1-0,” Whalen said. “I’m not saying we win the game if we get it, but that pitch led to an awfully big change in the game.”
Hayden Wilson had struck out his first time up, but he’d learned something. He followed Johnson with a two-run single to right for a 3-0 lead.
“Two men in scoring position, I was thinking backside,” said Wilson, who fought off a pretty good pitch from Smith.
The inning continued. Penninger’s bouncer over the third-base bag was fielded on a nice play — but then thrown away — and South’s lead was 4-0. Then Walker Joyce’s two-run single made it 6-0, and it was all but over.
Joyce banged a run-scoring double in the fifth to tack on South’s last run.
“We wanted to be playing our best at the end of the season — and I believe we are,” Chrismon said. “Guys made adjustments from their early at-bats to their later at-bats, and that was great to see. We played really good defense. We got good pitching. We got the timely hits.”
Tyler Shepherd pitched the seventh, as South logged its fifth victory in a row.
The Raiders stayed tied for third place in the SPC with Carson. South’s final regular season game is scheduled for Thursday. That will be a Senior Night contest against East Rowan.