Peace offering: Runners zip through Rowan with message of harmony 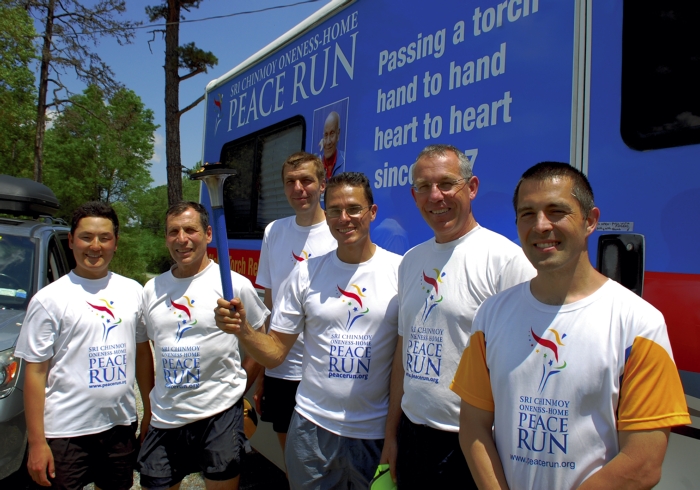 Cause out on the edge of darkness,
there rides a peace train
Oh, peace train take this country,
come take me home again

BARBER JUNCTION — The many children they meet and talk to along their four-month, 10,000-mile Peace Run seldom ask why they are doing it, Salil Wilson says.

On a deep, personal level, the kids get it. Why shouldn’t there be peace, love, harmony and kindness in their personal lives and within their families and communities? It just makes sense.

No, the kids they see in places such as schools and youth organizations seek the how, not the why. They want the details.

Does the runners’ torch go out? Where do they sleep? How far do they run in a day? Wilson smiles at all the questions, because they are the kind of things reporters usually ask, too.

But why does Wilson run? Why has this Peace Run concept taken him to all 50 states and 65 countries?

“I do it because its innately fulfilling,” says Wilson, executive director for the North American route, which enters its 10th day today.

The Sri Chinmoy Oneness-Home Peace Run passed through Rowan County Tuesday on its way from Winston-Salem to Charlotte. Teams of six male runners  and five women runners are on the road at present, but the numbers change throughout the journey.

Some runners might participate, say, 10 days, while others go the entire four months. And there’s a highly international flavor.

As runners Tuesday, Wilson and New Yorker Arpan DeAngelo joined Pierre Lantuas of France, Sarankhuu of Mongolia, and Himardri Kavai and Zoltan Theobald, both of Hungary.

There they were, carrying a burning torch over the backroads of Rowan County on a hot spring day, taking turns and finding refuge at times in a camper truck and minivan – their support vehicles.

Running is a great way to first, be of service and spread a message of peace, but the participants also see a country up close “and really feel it,” Wilson says.

“This section has a charm … it’s a unique part of the country,” he adds.

The runners find plenty of chances to look inward and be contemplative, helping their own inner peace.

Sri Chinmoy, an athlete, philosopher, artist and poet, inspired and fostered the Peace Run as a way to give people “a way to express their hopes and dreams for a more harmonious world,” the organization says.

The lighted torch carried by the runners is a symbolic wish for a better, brighter future. When it is passed from one person to another, it “unites us in our common aspiration to offer something positive to our world,” according to peacerun.org.

Since its founding in 1987, the Peace Run has touched 140 nations. It does not seek to raise money or highlight any political cause. It’s just people from many countries expressing their hopes for a more peaceful world, a more harmonious place.

A European Peace Run started in Portugal in February and will end in Rome in October after covering 16,000 miles.

Wilson said the Peace Run organization makes special efforts to reach out to teachers and students. Presentations promote self-esteem and friendship, along with an overriding philosophy that “peace begins with me.”

The runners started the day at Moore Elementary School in Forsyth County and ended at a gathering of boys and girls clubs in Charlotte. They were stopping at Mooresville in between, the starting point for the women’s team.

They stay the nights in motels that offer to put them up for free. The torch does go out sometimes, and in dry California, they keep it unlit on purpose so as not to start fires.

An estimated 50,000 children in more than 1,000 cities and towns on the North American route are expected to be reached by the Peace Run.

Overall, more than 5 million people have participated since the inaugural Peace Run, and endorsements for it have come from people such as Pope Francis, Nelson Mandela, Mikhail Gorbachev and Mother Teresa.

The North American route left New York City April 11. Its snaking trip across the country also will touch parts of Mexico and generous portions of Canada before arriving back in New York Aug. 13.

Lantuas, the Frenchman, has committed himself to the entire four months. He’s a teacher, who has an understanding headmistress who herself is a runner, Lantuas said. He has to be back in France for a new school year at the first of September.

Theobald also plans to stick with the run the entire four months, but his fellow Hungarian, Kavai, is returning to Hungary after two weeks.

Team captain DeAngelo, 64, calls himself the grandfather of the group. He has run parts of the Peace Run 10 times. He averages about six to eight miles a day on the road.

In coming days, the torch will arrive in Columbia, S.C., Savannah, Ga., and Orlando, Fla., by next Monday.

“I think this is the hottest day we have had, actually,” Wilson said.

And the next leg was underway.

Now I’ve been crying lately,
thinking about the world as it is
Why must we go on hating,
why can’t we live in bliss?

Cause out on the edge of darkness,
there rides a peace train
Oh, peace train take this country
come take me home again