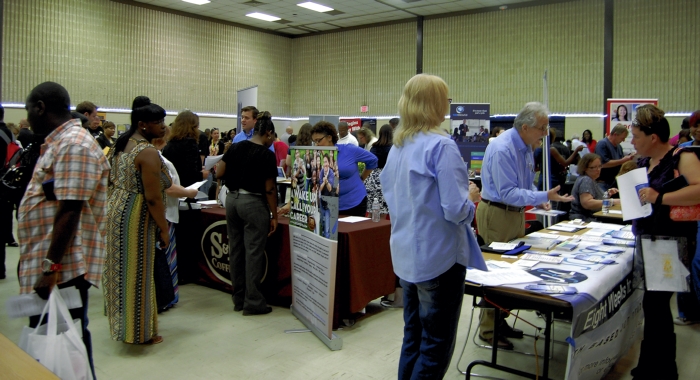 A job fair similar to this one earlier this year will be held Tuesday at Salisbury Civic Center on Martin Luther King Jr. Avenue. Amanda Raymond/Salisbury Post

Dozens of people spoke to the 40 different employers at the event, including FedEx, Novant Health, Henkel, Gordon Foods, U.S. Office of Personnel Management, Department of Prisons and the N.C. Wildlife Resources Commission.

This is the second year for the community-sponsored fair, said Brianna Price, human resources analyst for Salisbury.

“There was a need in the community,” Price said.

Salisbury Transit provided free rides to the Civic Center for those who presented flyers for the event.

Price said organizers realized transportation can be an issue for some citizens.

“We don’t want that to stop people from coming,” she said.

Free transportation from Salisbury Transit was also provided to get people to the workshops at the NCWorks Career Center last week. Debbie Davis, center leader, said people were able to get help with their resumes, tips on how to be successful at a job fair and tips for interviews and professional attire.

“I hope folks get a lot of good leads for interviews,” she said, adding that she hoped the companies could find the employees they were looking for.

Darius Welch, a senior graduating in May, said he was looking for a job for after graduation.

“A lot of the companies here were very informational,” he said.

Welch has a YouTube channel called Yard Talk 101 that promotes historically black colleges and universities. He said he was able to get advice from the business representatives at the fair.

“It was a networking ground for me,” he said.

Tabitha, who did not want to give her last name, said she liked the fair because she was able to ask questions and meet people, instead of just submitting a resume online.

“When you come here, there’s personal contact,” she said.

Brittney Shupe, another attendee, said she was having trouble finding a job. She said some of the businesses referred her to online applications.

“Some people don’t have computers,” she said.

She said she wanted the fair to bring in more businesses that were open to hiring people with criminal backgrounds.

Attendee Rose, who did not want to give her last name, said she retired from her job after 15 years and was looking for a change of pace. She said there were many job opportunities at the fair and she was able to gather brochures and contact information.

Price said the organizers hope to continue the fair and increase both employer and participant attendance.

“We’re hoping each year that it does increase and the word does spread,” she said.