Editorial: How not to close schools 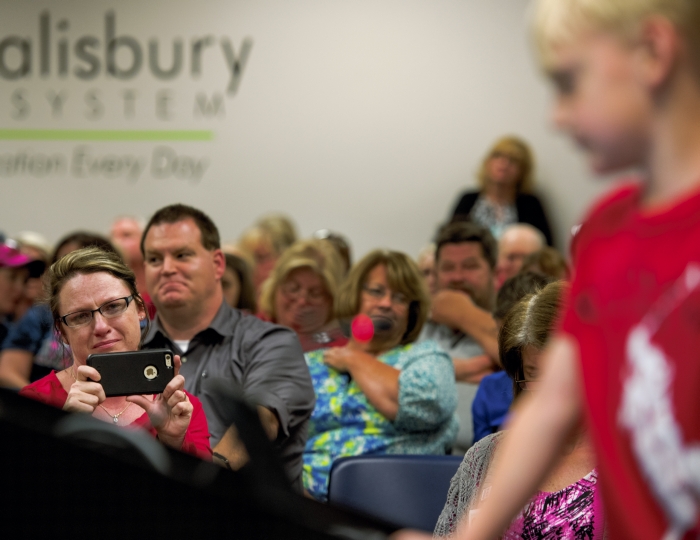 A mother sheds tears as she films her son at the podium giving his thoughts on school closure during the public comment portion of a Rowan-Salisbury Board of Education meeting earlier this year. Allison Lee Isley/Salisbury Post

The communities of Faith, Morgan, Enochville and Mount Ulla would like to give school board members a homework assignment. Write an essay on this topic: How Not To Start a Dialogue about Consolidating Schools.

• Enthusiastically accept a report that identifies some of the most close-knit and best-performing elementary schools as candidates for closure.

• Suggest in public statements that the process should move forward quickly.

• Give little emphasis in the beginning to considering other scenarios.

• Downplay the validity of responses that include emotion and nostalgia.

School board members admit the consolidation process is off to a rocky start. Instead of a dialogue, so far they’ve gotten an earful. Their goal is to streamline the school system to run more efficiently, and cool reason should prevail when dealing with taxpayers’ money. Passions run high, though, when it comes to schools. How could board members have broached the possible closing of some schools without spurring public outcry?

For starters, the consultants could have presented several scenarios at once, each one identifying different schools to be closed. On the downside, that might just have angered the entire county. At least then, though, supporters of the schools mentioned to date would not suspect a bias against rural schools.

The board deserves credit for tackling such a tough issue. As elected officials, board members could choose the easy route, maintain the status quo and tell people what they want to hear. If the system stays the course, though, the trends in school-age population (down) and operating costs (up) could eventually make the system unsustainable.

There are more than two sides to this story. While the most vocal people are dead-set against school closure, others see the growing need for change of some kind. The school board might not have launched this process in the most artful manner, but it has certainly gotten everyone’s attention. Now, let’s work together to help the board figure out a solution.