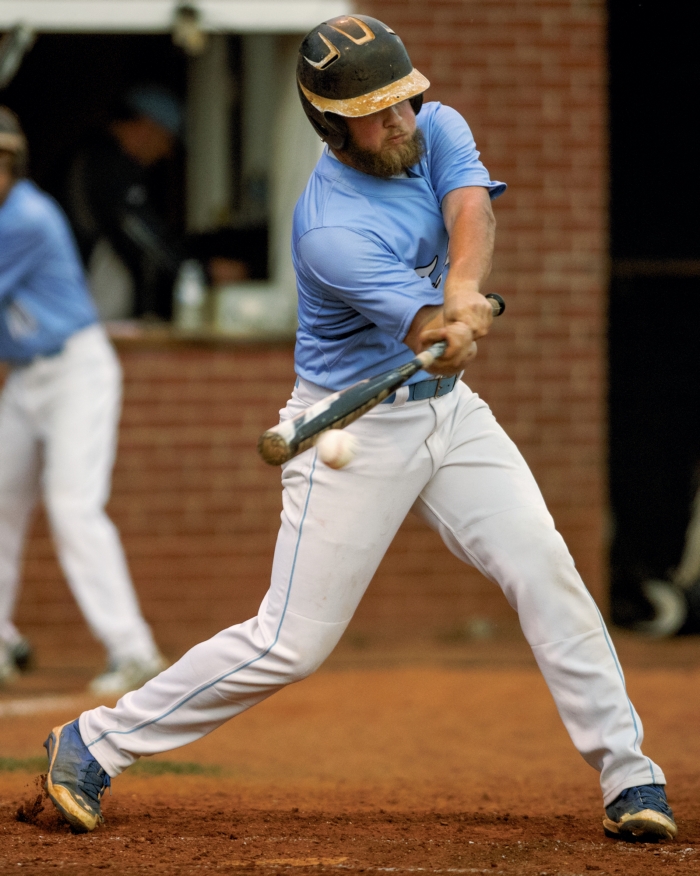 ALLISON LEE ISLEY/SALISBURY POST West Rowan’s Jonathan Luther, shown in an earlier game against South Rowan, had the game-winning single last night as the Falcons topped Cox Mill, 4-3, in the bottom of the seventh inning.

MOUNT ULLA — First place in the South Piedmont Conference is West Rowan’s for the taking.

The Falcons positioned themselves to win a second consecutive regular-season championship Tuesday night when they rallied from a three-run deficit to beat visiting Cox Mill, 4-3.

“We’re capable of doing anything,” third-baseman Brandon Walton said after West (19-4, 14-3) scored twice in the bottom of the seventh inning and clinched at least a tie for the title. “We know how to do this.”

The Falcons lead second-place East Rowan by a game in the standings and can secure the top seed in next week’s conference tournament with victory in today’s season-finale at Hickory Ridge.

“I like to think this is why we’re first in the conference,” coach Seth Graham said. “We play hard right until the end and find a way to get it done. It wasn’t pretty tonight but it still counted. One run better — that’s all you have to be.”

West scored the winning run when first-baseman Jonathan Luther steered a ground-ball single into left field, plating teammate Trevor Atwood with no one out in the seventh inning. He connected against a drawn-in infield with hard-throwing right-hander Justin Sponseller — Cox Mill’s stingiest reliever — on the mound.

“I was just trying to make something happen,” Luther explained after collecting two of West’s 10 hits. “With no one out and two runners on, I just wanted to put it in play. I wanted to see what I could do with the stick.”

Cox Mill coach Brandon Taylor needed a few minutes to compose himself after the sudden turn-of-events.

“We were in the situation we wanted to be in,” he said after the Chargers (12-10) fell to 7-10 in league play. “That relief pitcher hadn’t allowed an earned run all year. He’s saved six games for us.”

West entered the last of the seventh trailing 3-2, but Kacey Otto stroked Sponseller’s first pitch into center field for a base hit, then stole second on his next delivery.

“Coach told me if I got on, I was stealing first pitch,” said Otto, who went 3-for-4 and scored the tying run. “We wanted to put pressure on them right away.”

After Trevor Atwood coaxed a walk, winning pitcher Austin Love stepped up in an obvious bunting situation. Sponseller started him off with a curveball for strike one.

“That was a good pitch,” said Taylor. “So was the next one.”

Sponseller followed with an 0-1 curve that dissected the plate and scrambled Love’s eye level. He squared and managed to place a bunt toward third base. Sponseller fielded the ball and threw wide to first base, allowing Otto to cross the plate.

“I saw it out of his hands,” said Love, a junior right-hander who won his sixth game. “I was able to stick with it instead of pulling back.”

Graham said he advised Love ahead of time. “The conversation we had, I told him to try to get over the top of the ball,” Graham noted. “And that’s what he did. A curveball is very easy to pop up, but he got on top of it and made a good bunt.”

That set the stage for Luther, one of six West seniors recognized before the game. With runners at the corners, he worked the count to 3-and-1 before paddling a 3-1 fastball past Cox Mill’s infielders into shallow left field. It gave West it’s only lead — on the game’s final pitch.

“That’s all that matters,” Luther said. “This game shows how much fight we still have in us. We’re always looking for another pitch to hit, another play to make. We love to fight, we love to win, we love to play the game.”

NOTES: Today’s game at Hickory Ridge is scheduled to start at 5 p.m. Graham said Caleb Link is West’s likely starter. … Lefty Bryan Ketchie has pneumonia and won’t pitch until next week at the earliest. … West loaded the bases in each of the first two innings but failed to score. The Falcons left 12 men on base. … Love pitched a complete game, struck out seven and allowed only one earned run.