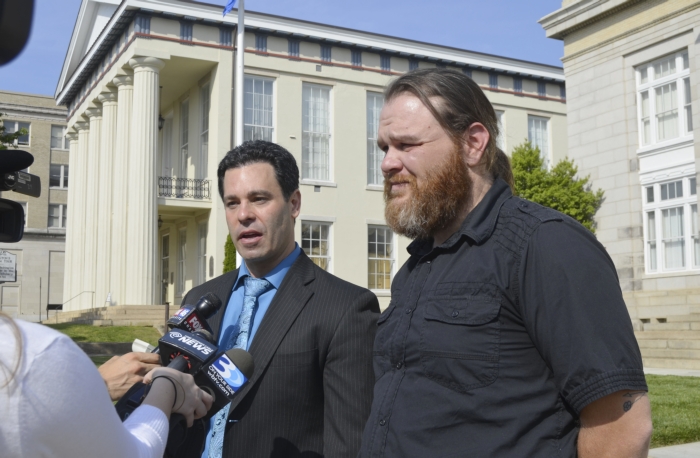 Charlotte attorney Adam Seifer, left, speaks to media with his client James Meyers Jr., who was charged with misdemeanor larceny for not returning a 2001 Tom Green movie, "Freddy Got Fingered," 14 years ago to a now closed J & J Video. Meyers was arrested in late March for the offense. Shavonne Walker/Salisbury Post

SALISBURY — James Meyers Jr. walked out of court, free from the potential fine he could have gotten for not returning a 2001 VHS rental of the Tom Green movie, “Freddy Got Fingered.”

Meyers, of Concord, said he was pulled over March 22 for a taillight that was out, but when the officer checked his record, he discovered that Meyers had an outstanding warrant for larceny. The misdemeanor offense was brought against him by J&J Video, which has since closed, because the movie was not returned to the store.

Meyers said outside of the Rowan County courthouse he did not remember renting the movie, much less watching it.

Meyers, a single father, was allowed to take his daughter to school the day the officer stopped him, but reported to the Concord Police Department later that afternoon and was arrested.

Meyers has been stopped for various minor traffic infractions since 2002, but no mention of the warrant has ever come up, he said.

The offense could have cost Meyers up to $200 in fines and possibly other court costs, which the star of the movie, Tom Green, offered to pay. The movie is about a slacker who lives with his parents and wants to become a cartoonist.