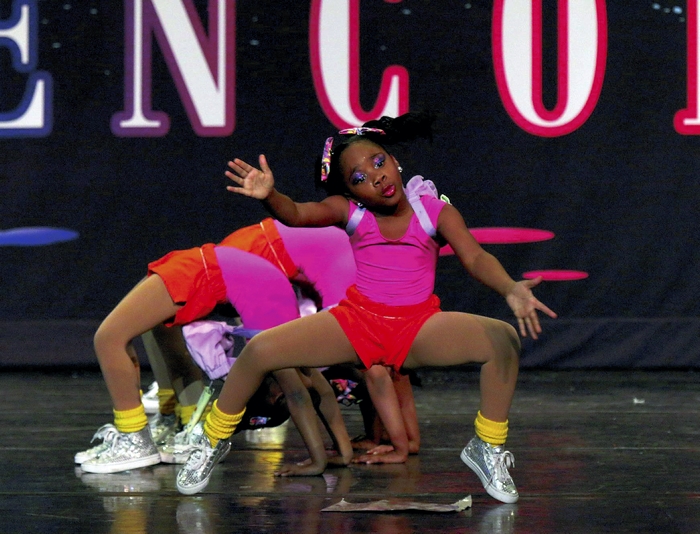 Shiloh Ricks and other dance group members danced a Hip Hop Dora routine at the Encore DCS competition. Triple Threat Dance & Charm were the overall division winners for the competition, and now hope to compete and perform at Disney World next year. Submitted photo

The group is raising money to compete in a national dance competition at Walt Disney World in Florida.

The dance group competed and won all of the top spots, including the overall grand champion award, at the Fever Productions Dance and Cheer Competition in Wilmington during the group’s first time at the competition about two weeks ago.

“They danced their hearts out,” Krystal Stukes, founder of Triple Threat, said. “They knew what was at stake that day.”

Triple Threat also won the Studio of the Year award.

The group submitted nine dances and had the highest score for each division they competed in.

“They placed no lower than first,” Stukes said.

One of the dances the girls competed with was a tribute to Rosa Parks.

While in Wilmington, the girls spent time at the beach, restaurants and parties hosted by the competition organizers.

The girls also competed in the Encore DCS dance competition and were second overall division winners.

“And the numbers keep growing and I’m glad for that because that’s more kids we can touch,” Stukes said.

The group accepts boys and girls from the age of 2 to 13, for now. Stukes is starting a cheerleading prep class next year to help middle and high school girls get ready for cheerleading tryouts, so the age range will increase.

Stukes, who has 20 years of dance and cheerleading experience, teaches the classes along with James and John Woodson, who have experience in theater.

The organization has a partnership with Salisbury’s Parks and Recreation Department and Lee Street Theatre and received a grant from the Margaret C. Woodson Foundation.

Along with offering summer camp and recreational classes to teach dance styles like ballet, tap, jazz, hip-hop/majorette and lyrical, the organization started offering charm and etiquette classes this year to prepare girls for modeling and pageants.

The charm girls are competing in the organization’s first Charm Girl Pageant on May 21 and some were selected to model for the Lebo’s Dance 2016-2017 catalog out of Charlotte.

The dance competition girls have also competed this year in Columbia, S.C. and Southern Pines, N.C. They will be competing in a second national competition in Charleston, S.C. this summer.

Above all else, Stukes tries to instill high self-esteem and self-confidence in the girls.

Though they did well this year, next year the girls have their sights set on competing and performing at Walt Disney World in Florida.

“We’ll have a lot of different fundraising efforts coming up for the year to help support because we want to make sure every child has that opportunity,” Stukes said.

To get the fundraising started, the girls are selling items for $5 and below right now, and they will be fundraising at their recital at Livingstone College on May 21.

There will be dinner theater events, $5 and below sales and car washes to help raise money throughout the summer.

Stukes said next year’s dances and costumes will have a Disney theme to get the girls in the spirit.

For more information about Triple Threat Dance & Charm, visit its Facebook page at https://www.facebook.com/triple.threat.16568/ or email Krystal Stukes at 3xthreatdance@gmail.com.