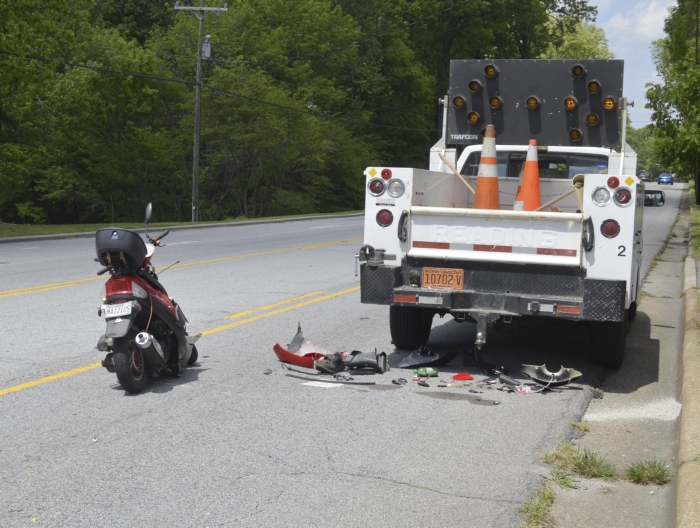 A 75-year-old Granite Quarry man was injured when he collided into the back of this Granite Quarry town pickup on North Salisbury Avenue. Police say he was wearing a helmet and was conscious at the scene Tuesday afternoon. Shavonne Walker/Salisbury Post

Police would not release the man’s name, but said he is a Granite Quarry resident. He was traveling on North Salisbury Avenue, just in front of East 52 Auto Care and the Timber Run subdivision entrance, when he ran into the back of the town vehicle, hitting his head.

The maintenance staff had just begun to mow the edges of the road around 1 p.m. while the pace vehicle was stopped in the right lane, said Chief Mark Cook, of the Granite Quarry-Faith Joint Police Authority.

Cook said the truck was stationary and had no time to move. When the employee looked up “it was too late.”

The rider was wearing a regulation motorcycle helmet that had no face mask. He did have some head injuries, but was conscious and alert at the scene, Cook said.

“If he had not had a helmet on, it would be a different outcome,” he said.

There were items scattered near the scooter including parts, the scooter riders’ shoes and a drink bottle.

The man was taken by to Novant Health Rowan Medical Center to be checked out. His injuries are not life-threatening, Cook said.