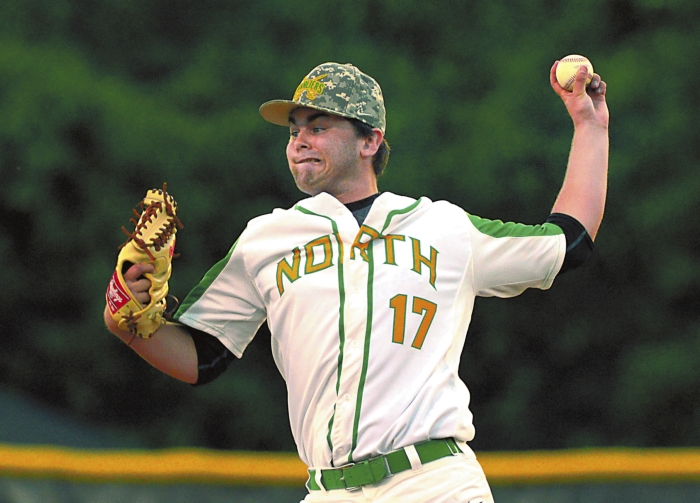 Score one for the Cavaliers.

North takes a one game lead in the CCC at 8-1, as Salisbury falls back into a tie with West Davidson at 7-2. The two squads meet again on Friday at Salisbury (7:00).

White was in complete command on the mound throughout the game, allowing just four hits and striking out nine batters. He was dominate early, striking out six of the first nine Hornets he faced.

Another senior, Lee Sells, got Griffin Myers to hit into a field’s choice to end the game.

“I’m usually a contact pitcher, getting ground balls and fly balls,” said White. “I’m not usually not a strikeout guy, but look, if it was on it was on, but I give all the credit to our defense and the way we hit the ball.”

White, a recent signee with Belmont Abbey, may have working with a lot adrenaline, considering the magnitude of the game and the fact it was against county rival Salisbury. He tore an ACL in the top of the first at Salisbury last year and didn’t get to pitch against the Hornets as a junior.

“It’s Salisbury and it’s conference championship week,” said White. “We were locked in from the get go and the whole team was ready to rock and roll. It meant a lot to be able to pitch against them, after tearing that ACL last year. But 1-9, they’re great hitters so I was just trying to pound the zone and let my defense work.”

“Brandon pitched like the pitcher of the year in the conference, or at least he’s made his case for it,” said North coach Aaron Rimer. “He can throw it. He’s worked real hard to improve his velocity on the fast ball and it’s showing.”

“I thought White was outstanding,” said Salisbury coach Mike Herndon. “He kept us off balance and we didn’t barrel a ball up until the third or fourth inning.”

By then, the Cavaliers led 6-0 and had all of the momentum. Led by right fielder Lentz, who was 4-for-4 on the night but needed a home run for the cycle.

“I haven’t hit a homer since Little League, but I hit a lot of ’em back then,” joked the junior, who also excels on the basketball court. “I was just focusing on hitting the ball in the hole, that’s what I was doing all night.”

Lentz’ screaming triple down the right field line put North up, 1-0, just two batters into the bottom of the first. Leadoff man Jake Pritchard had gotten by an infield error.

Robert Monroe then doubled in Lentz, just missing a homer, and then Holden Lanier singled in Monroe. Lanier eventually came home on another Salisbury error and it was 4-0 after one inning.

“I am disappointed that we lost but not in the effort we gave,” added Herndon. “I thought that early, if we make a couple of plays, they may score one run and it’s a different game, but that happens in baseball.”

Pritchard walked and scored on Lentz’ double in the second inning and North made it 6-0 in the third frame when Steven Thurston singled in Noah Gonzalez, who had led off the inning with a double.

Harrison Smith singled in Will Steinman for Salisbury’s only run, pulling the Hornets to 6-1 in the fourth inning.

The Cavaliers got the run back in the bottom of the inning when Lentz singled and scored on a double from Lanier.

North banged out 11 hits, but eight came from Lentz, Monroe and Lanier. The Cavaliers played errorless baseball behind White but no so much running the bases. North had four base runners either picked off or caught stealing, two by Salisbury catcher Bo Rusher, throwing behind runners at first base.

“We were really close to playing a great game, but we gave away a full inning on the bases,” said Rimer. “Rusher did a great job behind the plate but we can’t relax like that on the bases.

“But still, we came out and jumped on them early,” continued Rimer. “Our kids were super focused tonight. Now, we get to do it all again on Friday and it should be a lot of fun. But we don’t want a co-championship, we want to win it outright.”

A win at Salisbury on Friday would give the CCC title to North Rowan. A Salisbury win would tie the Hornets and Cavaliers. West Davidson could make it tri-champs by beating East Davidson.

Note: Will Steinman went the distance for Salisbury on the mound and was hurt some by his defense. He struck out three batters and pitched out of trouble in almost every inning.

Prep Golf: Another title for East; Lyerly is SPC…