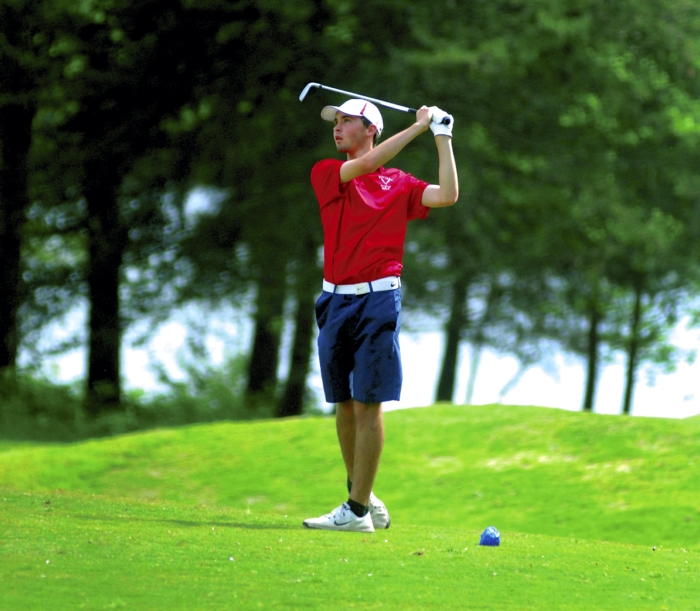 CHINA GROVE — East Rowan’s golf team and fans hummed another verse of “We Are the Champions,” adding the South Piedmont Conference Tournament championship to a long list of titles.
But like the song says, this was no bed of roses, no pleasure cruise. Warrior Golf Club played long and treacherous on Monday, and even on a day overflowing with sunshine, scores were high.
Drives down the middle found sand. Putts that looked dead-on scurried 5 feet past pins.
East, which won last week’s Rowan County title with a 291, shot 299 this time, good enough to beat runner-up Hickory Ridge, which put three players in the 70s, by nine strokes.
“It was one of those days where you had to fight for pars instead of looking for birdies,” East senior Logan Shuping said. “The pin placements were tough. The greens were firm and fast.”
Shuping shot a breezy 67 last week at Warrior to win the county championship. This time he scrambled to a 74 that was still the third-best score of the day.
“I wasn’t hitting the ball all that well,” Shuping said. “So I felt pretty good about 74.”
East junior Nick Lyerly has been the SPC’s dominant golfer all season and he was again on Monday. Lyerly had been so consistent in the SPC’s steady stream of twice-a-week, nine-hole events that he carried a staggering, 10-shot lead into the conference tournament. It was going to take a disaster for him to relinquish the individual title. But disasters can happen. The recent Masters was proof of that.
“I was determined to play to win, rather than playing not to lose,” Lyerly said. “I wanted to play my game and not worry about what anyone else was doing.”
He accomplished that goal. He struck a balance between caution and aggressiveness and his 1-under 70 was the best score all day. Lyerly won the season race for SPC Player of the Year by a whopping 16 strokes. Shuping finished second.
Lyerly got off to a torrid start. He began his round on the No. 9 hole and made a birdie. After three straight pars, he sank a 40-foot putt for eagle 3 on the 481-yard 13th hole.
Lyerly was striking the ball well enough to shoot in the mid-60s, but the No. 18 hole provided a serious setback. Even Lyerly can have a bad hole. His tee shot on the par-4 18th sailed right and found a grove of trees.
“I should’ve just chipped out of there, but I saw an opening and tried to hit through it,” Lyerly said.
He took a chance, and it didn’t work out. His second shot struck a tree and ricocheted back at him. An approach shot fell well short of the green. He ended up missing a 6-foot putt and took an ugly ‘7.’
It took Lyerly a while to recover mentally, and he missed two 5-foot putts for pars.
“I had to take a couple of deep breaths and settle down,” Lyerly said. “In golf, you’ve got to move on to that next shot. That triple was done, and I had to put it behind me.”
A nice uphill putt fell and got him back on track. Then he finished smoothly. He was solid at the end and easily handled the water-dominated No. 7 hole that’s considered the Warrior’s toughest test.
“No. 7 is a hole where you can get in trouble and make a big number,” Lyerly said. “But I hit two good shots.”
The other two counting scores for East came from youngsters — sophomore Bryson Sprinkle’s 77 and freshman Alex Miller’s 78.
“It was a tough day for me, with a double and a triple (bogey),” Sprinkle said. “I got myself into trouble quite a few times, but usually I was able to punch my way out of it.”
Sprinkle birdied No. 17 and he also birdied the No. 18 hole that handed Lyerly and Shuping some of their most challenging moments.
“Those back-to-back birdies helped me salvage the round,” Sprinkle said.
While their rounds weren’t part of the team score, East’s Ben Rollins (79) and Christopher Queen (81) still put up scores that were among the day’s best.
East, Hickory Ridge, Concord (329), Carson (330) and Robinson (337) advanced their teams to regional play at Asheboro’s Pinewood Country Club on May 3.
Other team scores were Cox Mill (356), West Rowan (381), Northwest Cabarrus (383) and Central Cabarrus (396).
South Rowan was unable to post a team score, but South’s Parker Chavis, who had Monday’s second-best score with a 73, and Andrew Hubbard (81) qualified for regional play as individuals.
Northwest Cabarrus’ Cameron Williams (82) and Colby Mavropoulos (92) also were individual regional qualifiers.
Hickory Ridge’s strong day was spearheaded by 75s by Brody Davis and Mack Sheppard. Riley Smith’s 78 led Robinson to a team qualifying score. Concord’s qualifying effort was led by 79s from two of the league’s top five golfers — Walker Cress and Stephen Carroll.
Carson was a team qualifier through a balanced effort. All six Cougars shot in the 80s. Patrick Street, Joseph Mitchem and Tristan McDaniel shot 82s.
Robert Bauer was Carson’s fourth scorer with an 84. He playing in a foursome with Lyerly, and he made a remarkable chip from the trees to salvage a par on No. 7. The ball sailed over a bunker and stopped rolling 3 feet from the pin. Then he made the putt.
Still, the day — like the season — belonged to coach Rhett Teems’ Mustangs.
“It would’ve been pretty disappointing to win every conference match and then not win the tournament,” Lyerly said.
The Mustangs didn’t disappoint.