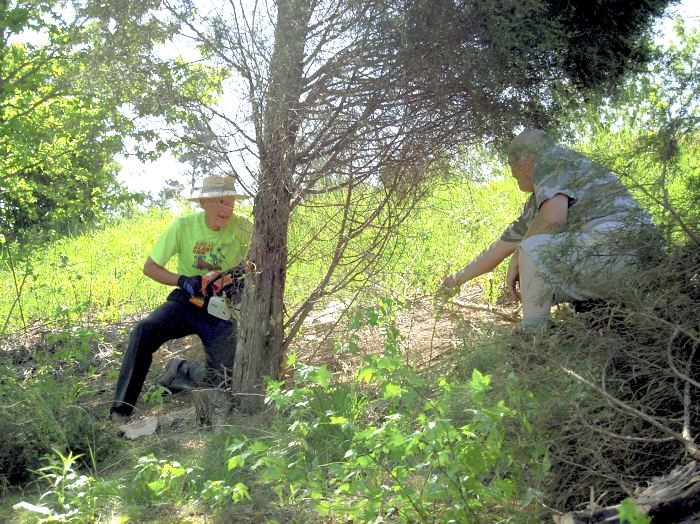 Amanda Raymond/Salisbury Post After feeling unheard by city officials, Morlan Park neighborhood residents Jerry Shelby (left) and Jason Rickard (right) decided to cut down the bushes and trees that were obstructing the view for drivers on Monday at the intersection of Morlan Park Road and Jake Alexander Boulevard South.

SALISBURY — The buzz of a chainsaw joined in the regular traffic noise at the intersection of Morlan Park Road and Jake Alexander Boulevard South on Monday morning.

In disagreement with the city’s decision to install a median to try and make the intersection safer, Jerry Shelby, a resident of the Morlan Park neighborhood, gathered a couple of friends to cut down trees and crape myrtles at the four corners of the intersection.

“My patience is out,” Shelby said.

Shelby, neighborhood resident Jason Rickard and another neighbor met at the intersection with chainsaws, hand saws, Shelby’s 60-year-old Boy Scout hatchet and other hand tools to cut down the trees, crape myrtles and clear out the other brush in the area. In an hour, they had one corner cleared out.

Shelby said he has been waiting eight years for the city to respond to the visibility issues at the intersection. Eight bushes were cut down last week.

Shelby said simply cutting down the vegetation would help improve safety, so he decided to take the matter into his own hands.

A personal philosophy of Shelby’s is, “If you see a problem, you own it. You own it until it gets fixed.”

Shelby also fought to have a streetlight installed near Morlan Park, which is something Jason Rickard remembers and appreciates.

Rickard said Shelby was a good man who had the safety of the neighborhood at heart.

He has lived in the neighborhood for five years and said the bushes and trees at the intersection have always been a problem.

“The entire time I’ve lived here, it’s been a horror,” he said.

Wendy Brindle, city engineer, said the N.C. Department of Transportation was planning to remove the crape myrtles from the intersection within a couple of weeks as a good-will gesture, since funding for the median project would not be available until 2017. Brindle said Shelby should have been told of DOT’s plans since he had previously met with division engineers.

At the City Council meeting last year, city staff said there had been 32 accidents, including one fatality, at the intersection since 2008.

DOT’s plan entailed installing a directional median that would prevent cars on Morlan Park Road from turning left onto Jake Alexander Boulevard and going straight across the intersection. Vehicles would still be able to turn left from Jake Alexander onto Morlan Park.

There would also be improvements made on Faith Road to add a protected left turning lane for drivers turning onto Jake Alexander Boulevard.

The project was projected to cost $400,000. The Department of Transportation would be responsible for covering the cost.

Residents have suggested putting in a traffic signal at the intersection in the past, but the state said it would conflict with the nearby railroad crossing on Jake Alexander Boulevard and would slow the flow of traffic.

The Department of Transportation said installing the median would be the best course of action, Brindle said.

Shelby said in the 16 years he has lived in the neighborhood, he has never had a problem getting across the Morlan Park Road-Jake Alexander Boulevard intersection, on bicycle or by car, which he does multiple times a day. He said though there is sometimes traffic when the light turns green at the Faith Road and Old Concord Road intersections on Jake Alexander Boulevard, it doesn’t take long for the traffic to clear up.

He said the problem is the bushes and trees causing visibility issues at the intersection of Morlan Park Road and Jake Alexander Boulevard.

“The biggest problem I have is being able to see around the bushes planted by the roadside, the trees growing from the ditches and the traffic signs blocking the view,” Shelby wrote in a letter he sent to the city in November of 2007.

Drivers have to pull up farther than the turning lane allows to see past the vegetation, which is made worse when they are in bloom during the warm months, Shelby said.

At the council meeting in 2007, the city agreed to try to maintain the landscaping at the intersection to increase visibility during a trial period of six months to a year.

The city sent crews to clear the area in 2007. Brindle said everything was cleared out except for the crape myrtles.

Shelby also circulated a petition to install streetlights at the intersection that was signed by all but two property owners in the 500 and 600 blocks of Morlan Park Avenue. According to Shelby, the city told him that adding streetlights would not be an effective safety measure because most of the collisions happened during the day.

Shelby said he met with the city manager, mayor, mayor pro tem and city engineer in 2015 to take them through the intersection and show them how the bushes and trees blocked the view. Shelby said those who went on the rides with him agreed that they could not see because of the vegetation, and they also did not make a U-turn at the next intersection on Jake Alexander Boulevard because they did not feel comfortable doing so.

Shelby said if the median is installed, he thinks people will begin making dangerous U-turns and may increase traffic on smaller roads in the neighborhood like Ivy Road, which is a narrow, unlined road. Traffic may also increase near Morlan Park, which is unfenced.

Brindle said the city has been responsive to Shelby’s concerns, just “perhaps not in the way Mr. Shelby had hoped we would respond.”

Citizens search for stars during ‘Shots Fired’ filming at…