Community speaks out against school closings 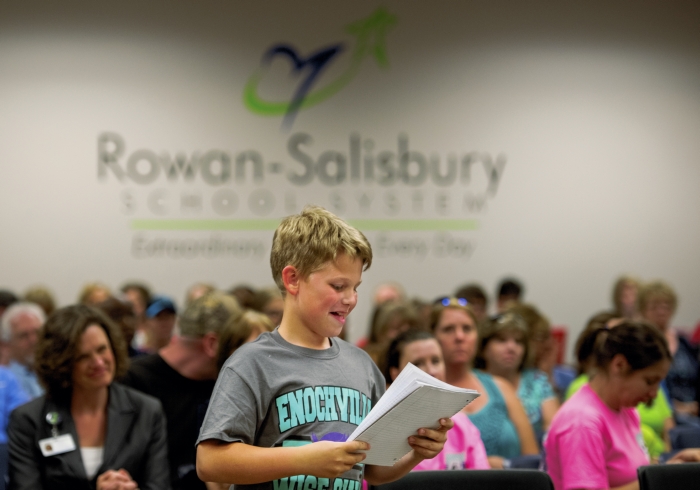 ALLISON LEE ISLEY/SALISBURY POST Brooks Overcash, 9, student at Enochville Elementary, walks up to the podium to gives his thoughts on the school closure discussion during the public comment portion of the Rowan-Salisbury Board of Education meeting on Monday at the Wallace Educational Forum in Salisbury.

SALISBURY — School supporters pleaded with the Rowan-Salisbury Board of Education for nearly 45 minutes at Monday’s business meeting to reject a proposal that would shutter four area elementary schools.

The proposal, which was submitted by SfL+a architects would call for the closure of Morgan, Faith, Enochville and Mount Ulla in addition to the already slated Cleveland and Woodleaf elementaries. But supporters of community schools say that closing the smaller facilities would be a bad idea.

“If you close our school, you close our community,” Brooks Overcash, a 9-year-old student at Enochville Elementary, told the school board.

Overcash was the second speaker during the public comment section of the board’s April business meeting, held in the Wallace Educational Forum. While only 14 individuals spoke, fitting research on class size and passionate pleas into the three-minute time limit, the board room was packed with parents and community members who clapped and cheered as each speaker left the stand.
[Story continues below video]

Speakers raised concerns of longer bus rides and how the move would affect children’s learning, mentioned the high performance of the schools in question and called the board’s desire to save money into question.

Others said that money, or keeping schools at full capacity, is not always in the best interests of students.

Cline pointed out that people change jobs, uproot their families and buy houses to ensure that their children attend small, well-performing schools. Faith Elementary has the highest reading scores in the district, and Mount Ulla has the highest math scores.

Mike Lyerly, a parent at Morgan Elementary, said that schools are the life of a community.

“Morgan’s community is like the roots and stem of a flower, and Morgan elementary is the blossom,” he said.

He also criticized the board’s reasoning that closing schools would save money on operating costs, saying that holding a meeting on school closures in a new $9 million building was a “big slap in the taxpayers’ face.”

Closing the predominately rural schools would cause property value to plummet and would create “dead pockets” in the county, he said.

“We’re trying to grow this county, and shuttering schools would only shrink it,” he said.

While he was speaking, Poston announced his intent to run for the Southeastern Board of Education seat, currently occupied by Susan Cox. Cox is up for re-election this fall. Poston said he had withdrawn from the political action committee Rowan Rural Save Our Schools and changed his address in order to run against Cox.

Poston was elected as the committee’s vice president on April 14.

Another speaker, Michael Julian, also announced his intent to run in the fall election for the board’s eastern district – a seat currently occupied by board Chairman Josh Wagner.

Todd Paris, former candidate for Salisbury City Council and president of Rowan Rural Save Our Schools, encouraged the board to vote to drop the scenario and tell the community what they really hoped to gain. If the request was reasonable, he said, the community would listen.

The board made no decisions Monday, but agreed to look into dates for another retreat to discuss the proposal and look at other options. Wagner clarified that no decisions had been made about closures, and said the board had hoped to start a conversation.

“We did that, obviously,” he said.

Wagner invited everyone who spoke to keep coming to meetings and to provide input, ideas and alternatives. It’s the start of a long discussion, he said – nothing will be done immediately.

“There is a discussion to be had. At some point, things have to change, things have to evolve. That may be 30 or 40 years from now, but if that’s the case, let’s start planning for that,” he said

The board will begin holding community meetings across the county to discuss the issue and hear feedback. The first meeting will be at Thursday at 6:30 p.m. at West Rowan High School to discuss the merging of Cleveland and Woofleaf. Wagner clarified that no county-wide consolidation discussion will occur at this meeting.