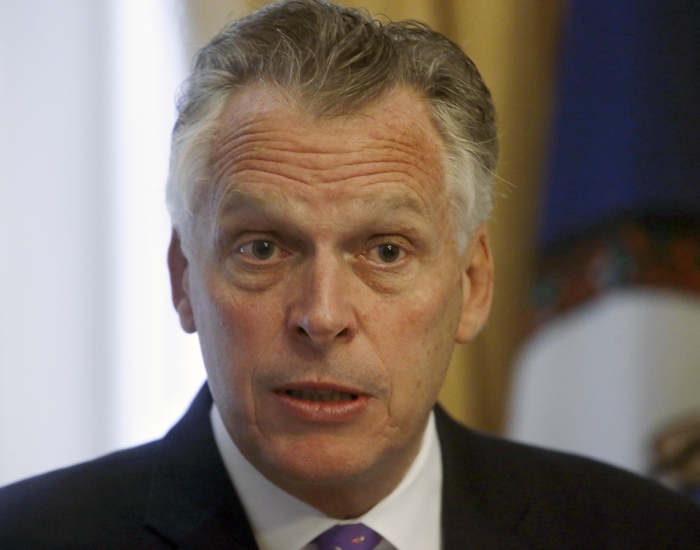 Thanks to Gov. Terry McAuliffe (D-Va.) 200,000 convicted felons in the state of Virginia may now register to vote.

Writes The Washington Post, “The change applies to all felons who have completed their sentences and been released from supervised probation or parole. The Democratic governor’s decision particularly affects black residents of Virginia: 1 in 4 African Americans in the state has been permanently banned from voting because of laws restricting the rights of those with convictions.”

McAuliffe’s executive order also allows felons, including rapists and murderers, to run for public office, serve on a jury and become a notary public. I can just visualize the campaign slogan now: “Vote for me. I’ve already done time.”

Republicans are outraged, of course. Virginia House of Delegates Speaker William J. Howell said: “The singular purpose of Terry McAuliffe’s governorship is to elect Hillary Clinton president of the United States. This office has always been a stepping stone to a job in Hillary Clinton’s cabinet.” It’s an accusation McAuliffe vehemently denies.

Hillary Clinton tweeted, “Proud of my friend (at)GovernorVA for continuing to break down barriers to voting. — H.”

After many years as a Republican, or red state, Virginia more recently has become a swing state and important to Democrats for winning the presidency. Just as former slaves in Virginia and elsewhere were loyal to Republicans for many years after Lincoln’s Emancipation Proclamation it is likely that many of these felons will become reliable Democratic voters. Maybe Democrats will next figure out a way to hand illegal immigrants crossing our southern border the right to vote.

McAuliffe, a prolific fundraiser for the Clintons, appears to be as loyal to them as a family’s faithful golden retriever. He has raised millions for them and for the Democratic National Committee. For a good account of McAuliffe’s fundraising antics and other financial dealings, visit the website counterpunch.org.

According to the National Conference of State Legislatures, “In 38 states and the District of Columbia, most ex-felons automatically gain the right to vote upon the completion of their sentence.” In liberal Maine and Vermont, convicted felons may cast their ballots while in prison and are never disenfranchised. Most states require ex-convicts to apply to have their voting rights restored. Many factors go into the decision, including the nature of the crime. It is not always automatic.

In his book “The Virginia Constitution,” John J. Dinan writes: “Virginia’s felon disenfranchisement provision … has been challenged in several cases, but sustained in each instance.” In 1982, Virginia voters rejected a proposed amendment to the state constitution that would have allowed convicted felons to vote. In 2004, notes Dinan, a constitutional amendment to automatically restore felons’ voting rights after the completion of their sentences “was considered by the General Assembly, but failed to achieve a majority in either the House or Senate.”

Societies going back to Greek and Roman times have disenfranchised convicted criminals, because they regarded such actions as part of their punishment. There was also a sense that not allowing felons to vote might, when combined with other punishment, serve as a deterrent to crime.

Republicans have long accused Democrats of election shenanigans. i.e., Mickey Mouse’s name showing up on registration lists, voters giving nonexistent addresses, some voting more than once. And let’s not forget what I call the “cemetery vote,” or the ultimate absentee ballot.

In an interview following McAuliffe’s announcement, Speaker Howell suggested legal action might be taken. There isn’t much time between now and November and the Republican majority legislature is not even in session. Legal action would be difficult.

If Hillary Clinton wins the presidency and the votes of Virginia felons prove decisive, cheating and voter cynicism will plunge to new depths. Most people probably think politics can’t get any dirtier. McAuliffe’s action shows they are wrong.

My Turn: Trump’s rise no mystery