Queen of the library gets a royal sendoff 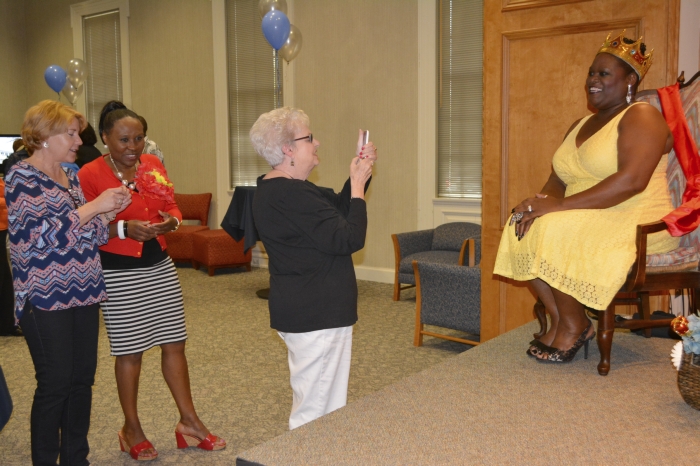 Dressed regally and seated on her ‘throne,’ Sherri Jefferies smiles for the camera as Sandy Bogle snaps a photo. Scores of friends, family members, co-workers and retirees like Bogle turned out to honor Jefferies Friday as she retired from Rowan Public Library. RPL employees Paula Rusher and Beverly Gaston are at left. Susan Shinn/For the Salisbury Post

In her 4-inch heels, which she wore to work every single day, Sherri Jefferies stands 6 feet tall. She is not a petite woman. Her white teeth glow against her smooth, dark skin. She always has a smile on her face.

She smiles when she tells patrons how much money in overdue fines the computer says they owe. And then she waits.

And nearly every single time, the patrons — the same people who were squabbling moments earlier with staff members — open their wallets, gladly, and pay.

Robert Jones may be the court jester, but Sherri Jefferies reigns as the queen of Rowan Public Library.

Jefferies retired Friday after 35 years of service, and library staff — when the doors closed at 5 — gave her a royal send-off. The stage of the Stanback Room was outfitted with a “throne,” and, wearing a golden crown on her head, Jefferies walked on a red construction paper carpet, before extending greetings to her subjects — er, the nearly 100 friends, family members, co-workers and library retirees who had gathered.

The library’s Marian Lytle said that Jefferies never lost her composure over the years, and had prepared recorded remarks, which library staff set to a slide slow.

Jefferies graduated from Davie County High School, and envisioned herself as an executive secretary for a Fortune 500 company.

“Certainly not staying with the same company for 35 years,” she noted in the presentation.

But Phil Barton, then the library’s director, hired her.

“I think he saw something in this young lady from Davie County,” she said.

Early in her career with the library, she typed cards for the card catalog. Later, her desk was just outside Barton’s office.

He told her there’d be no room for advancement in that position, but he’d like her to consider the job.

“I thought, this man thinks I must want his job,” Jefferies said.

Jefferies then went on to work for Jeff Hall, the library’s current director. He wanted her to stay seven more years, and she stayed five, she said, “but only because the county would not give me my insurance.”

“You guys have been like family to me,” Jefferies said. “I appreciate you all. I will miss all of my work family — but not enough to keep working.”

She thanked for family members, many of whom were in attendance, including husband Rick, her brother, and her three sisters.

Then it was time for delicious refreshments prepared by library staff, along with cakes baked by one of her sisters.

Hall has worked at the library for 28 years — one of many longtime staff members there.

“She’s my right arm, and she has been for a long time,” Hall said of Jefferies.

Jefferies called Hall “the best supervisor in the world.”

“We took care of each other,” Hall said.

“She is wonderful,” said Marian Lytle, who came to work for the library in 1987. “She is wonderful. She is a class act of the highest degree. Her leadership, style, and knowledge of the ins and outs of this organization are a real plus.”

Ann Briggs Shaver was one of several retirees who attended Jefferies’ reception.

“I worked 30 years with the library,” she said. “We all leaned on each other.”

Jefferies’ last position was supervisor of circulation and the library’s paid staff of 14.

She said she found success in her role by “being a good listener, first and foremost, and being a good role model.”

She added, “This has been the best job ever. I’ve had good staff members. I’ve had a dependable staff. I got working with the public down to a science, and once I did that, it’s been easy.”

In fact, she loved the library so much that she and Rick married here in 2000. You can just picture her walking down the library’s circular staircase, her regal bearing on full display.

Rick Jefferies said his plan was to let his wife have her space as she makes the transition into retirement.

“She’s a busy, busy person,” he said, and he has no plans to leave a “honey-do” list for her when he goes to work. “I know if I give her one I’m gonna get one back.”

Friday’s event was special to her as well.

“They just went over the top,” said Jefferies, who wore a yellow lace dress with leopard-print heels. “They just outdid themselves.”

Jefferies and her husband, a Cracker Barrel manager, have a blended family of five children and six grandchildren, with one on the way. She’s looking forward to spending more time with her family, and is looking to get into event planning. She and her husband have three classic cars, a 1972 Pontiac Grandville, a 1966 Oldsmobile 442, and a Saleen Mustang, and enjoy going to shows and cruise-ins.

Jones, the children’s librarian, called Jefferies one of the most professional employees he has ever worked with.

“And she always came in dressed like a million dollars,” he said. “Ain’t no woman can wear heels like Sherri.”

Besides being Jefferies’ retirement day, Friday was also her birthday. Library staff had hung a “Happy Birthday” banner in the Hurley Room behind the tables of desserts. All the way around, it was a party fit for a queen.