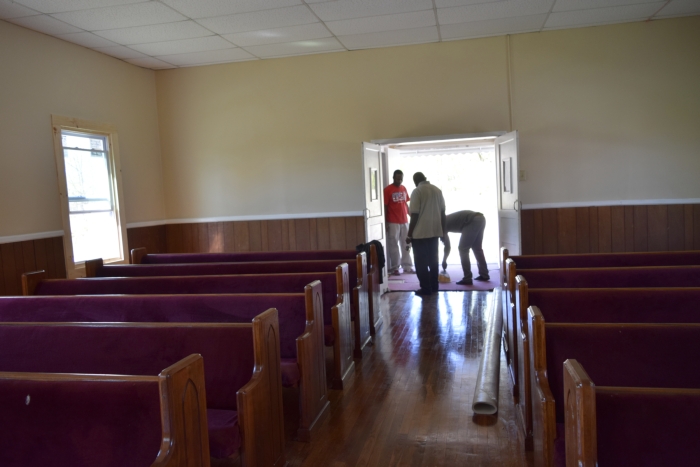 SALISBURY — The yard of the former Mount Olive Baptist Church looks like a storm blew through. A ladder leans against the stone steps, and the lawn is full of dusty, red cloth-covered pews. A porcelain toilet sits beside the old church sign. Inside, the altar is covered in cans of paint, and an old door is propped up against an embellished cross.

But inside, four men hard at work are in cleanup phase now, sweeping dust and splinters from the foyer. The old wood floor of the sanctuary shines in the sunlight coming through the new windows, and the polished pews are just waiting for their congregation to settle in.

The building was purchased last year by Christ Lambs Church Ministries, Inc., a relatively new congregation that wants to reach out to those who live along the Salisbury side of Bringle Ferry Road.

The current building was constructed in 1947, on the grounds of the old Mt. Olive Baptist Church, and had a rich history in the area. Christ Lambs Rev. Hamlet Kollie said his congregation thought it was the perfect place to launch their ministry.

“We want to keep up with the work the Lord had for it,” he said.

But the building needed some work. It had been empty since 2012, and members of Christ Lambs have been working on breathing new life into the building for the past four or five months. They’ve redone the roof, ceiling, wiring, bathrooms, put in new windows, torn up the old, patched carpet and replaced banisters on the basement steps.

“Presently we are just trying to give it a facelift,” Kollie said.

By the time the small congregation moves in, the building will be complete with a fresh, shining coat of paint. The building — and the congregation — have come a long way in the last year.

“The Lord has been blessing us over the year,” he said.

Christ Lambs started a little over a year ago on a family member’s back porch. At the time, the congregation was just Kollie’s immediate family, and the group of predominantly Liberian members aimed to minister to the West African community in Salisbury. But they saw that the whole area needed something.

“We saw that souls needed to be won in Salisbury,” Kollie said.

Over the past year, they’ve gained members and a church building, and hope to continue growing. The congregation, which met in an old fellowship hall on the church grounds, moved in last week. Kollie said they hope to have a homeless ministry and a counseling program in addition to other forms of outreach.

Kollie said the church is still at “80 percent” completion, but it won’t stop the congregation from celebrating their one-year anniversary. Kollie wants the church to be open in the community, where everyone is welcome.

“Our joy is that this community will have another church again,” he said.

Queen of the library gets a royal sendoff