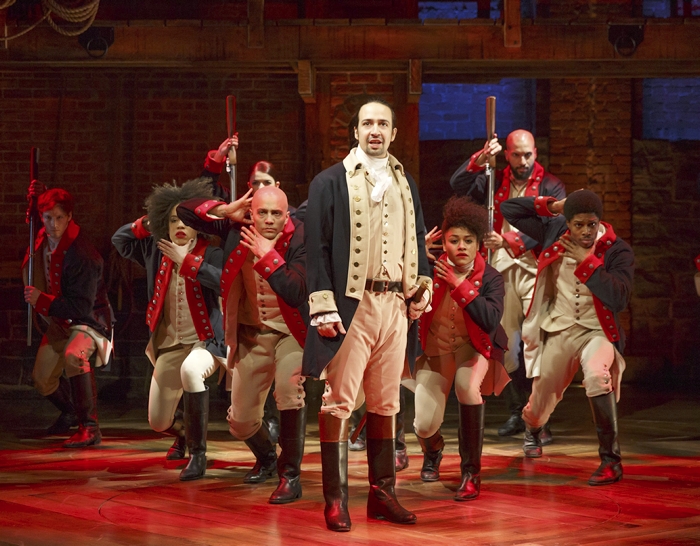 This image released by The Public Theater shows Lin-Manuel Miranda, foreground, with the cast during a performance of "Hamilton," in New York. "Hamilton," the hip-hop stage biography of Alexander Hamilton won the 2016 Pulitzer Prize for drama.

“The U.S. Treasury will put African-American abolitionist Harriet Tubman on the front of the new $20 bill, replacing former president Andrew Jackson, who will be moved to the back of the bill, Treasury Secretary Jack Lew announced Wednesday. Former Treasury Secretary Alexander Hamilton will remain on the front of the new $10 bill, after the Treasury encountered fierce opposition to its initial plan to demote the founding father to make way for a woman to appear on the paper currency, the department said.”

It is not an exaggeration to say this might be the most popular decision of the Obama presidency. (When Hillary Clinton and the Wall Street Journal editorial board agree it is noteworthy.) The reasons are numerous.

The decision spares Republicans the loss of Alexander Hamilton, whom many claim as their own despite his advocacy of a central government stronger than that of the Articles of Confederation. (“Above all, Hamilton understood the powers of government to be limited — not only by the written law of the Constitution, but also by the natural rights affirmed by the consensus of the Founding generation,” writes Carson Holloway. )

Keeping Hamilton reaffirms the impact an exquisite work of art, in this case a Broadway musical about a Founding Father, can have on the public, or at least a not-insignificant segment of it. It is a reminder that history can and should be taught every day, not just inside a classroom. Art in all its varied expressions and the symbols whose importance we too often dismiss (coinage, holidays, building names) are part of the way we transmit our civic culture and transcend divisions.

Tubman’s introduction to the front of the $20 is a reminder that our greatest Americans were not all, or solely, politicians. (Ben Franklin on the $100 bill is rarely seen these days.) It is a timely reaffirmation that presidents alone do not make the nation great. The intervention of the Pulitzer Prize-winning Lin-Manuel Miranda in the decision-making makes it that much more delightful, an example of citizen activism at its best.

The currency change banishes slave-owning, Trail of Tears President Andrew Jackson to the back of the … er … bill. Democrats don’t need to venerate him, and Republicans can be spared the celebration of his exaggerated populism. (They’ve had quite enough of that lately, thank you.) The country is now going to learn a great deal about an immensely interesting and deserving African American woman, a slave who freed herself and others, a spy for the Union and an advocate for women’s suffrage. Democrats swoon over the inclusiveness of the choice; Republicans, as several tweeted, get to admire a gun-toting, freedom-loving Christian and Republican.

If nothing else, we can agree on something. That’s no small achievement these days.