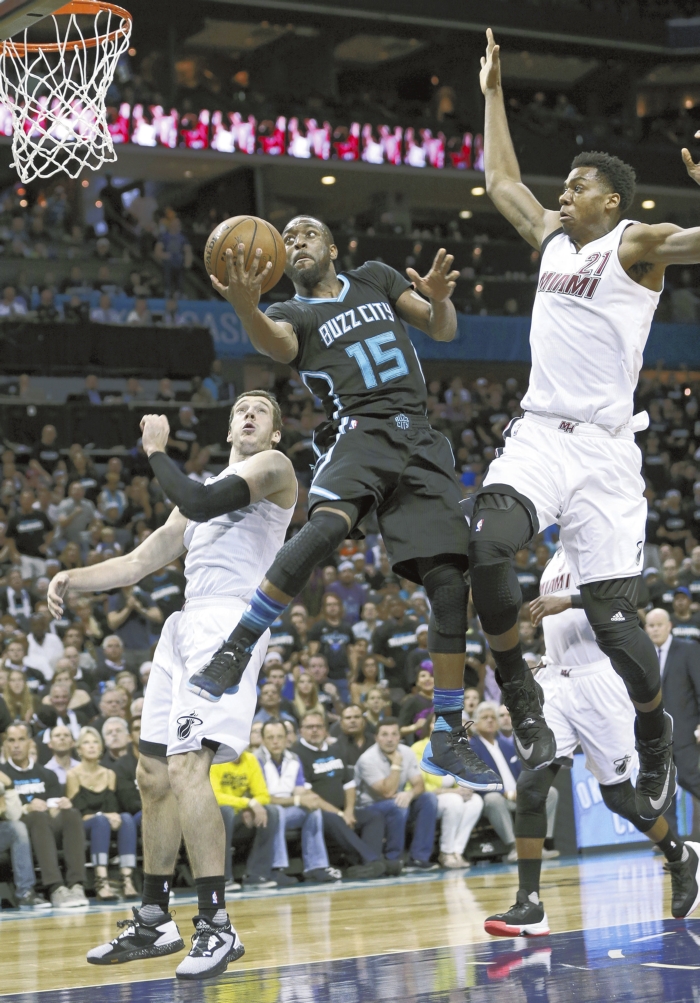 AP Photo/Chuck Burton Charlotte Hornets’ Kemba Walker (15) drives past Miami Heat’s Hassan Whiteside (21) during the second half in Game 3 of their NBA basketball playoffs first-round series in Charlotte, Saturday. The Hornets won the game, 96-80, their first playoff win in 14 years.

“When you have two first-ballot Hall of Famers. … and they both say, ‘Post Frank,’” Clifford joked, “you have to post Frank.”

Jeremy Lin had 18 points, while Kaminsky scored nine of his 15 points during an 18-0 run in the third quarter that broke open a tie game as the Hornets beat the Heat 96-80 on Saturday night to snap a 12-game playoff losing streak and earn their first postseason victory in 14 years.

The Heat lead the series 2-1, with Game 4 set for Monday night.

“This isn’t about winning one playoff game, it’s about winning a playoff series,” Clifford said of ending the team’s playoff drought. “This gives us a chance.”

Kemba Walker had 17 for Charlotte. Marvin Williams, a non-factor in the first two games while hitting just 1 of 17 shots, finished with 12 points and 14 rebounds.

Miami, which shot 58 percent from the field in the first two games, was limited to 34 percent shooting.

The Hornets outscored the Heat 52-28 in the paint and had four turnovers to Miami’s 15.

“We made a lot of mistakes,” Deng said. “In the first two games we did a good job with of taking away of guys’ tendencies. They rebounded and ran out when they got the lead and keep going.”

Looking to combat the Heat’s height advantage on the perimeter, Clifford moved Williams to small forward — in place of the injured Nicolas Batum — and inserted Kaminsky and Al Jefferson into the starting lineup.

It didn’t help early on when Deng knocked down four 3-pointers in the first six minutes on Kaminsky.

But in the third quarter Kaminsky got matched up on Wade in the low post and took over, almost scoring at will.

Kaminsky had 11 points in the period, including a turnaround jumper over Joe Johnson. Lin followed with a 3-pointer from the right wing to push the lead to 14, raising the fans clad in black “Enter the swarm” T-shirts and white Hornets headbands off their seats.

Clifford texted Kaminsky on Saturday morning with the game plan.

“When I woke up this morning, that was the first thing that I saw,” Kaminsky said. “So I had the chance to think about it all day. And I talked to him a little bit about before walkthrough this morning. He said, ‘When you get in the post, be patient and go at them.’”

The Hornets would push the lead to 24 in the fourth quarter with Lin scoring and creating off the fast break.

“You have to give them credit because they came out with great energy during that spurt,” Spoelstra said.

Charlotte has been strong at home all season, going 31-10 during the regular season.

Miami started off Game 3 similar to the previous two, with Deng hitting four 3-point attempts in the first six minutes for an early 20-15 lead.

But Charlotte withstood the early Heat assault and took the lead near the end of the first quarter behind eight points from Lin, who found his way to the basket repeatedly and drew a second foul on Whiteside.

Heat: After making 5 of 7 3-pointers to start the game, Miami made just 1 of its next 13 attempts.

Jordan took his regular seat at the end of the team’s bench, repeatedly clapping his hands together hard.

Had Charlotte lost, it would have matched the New York Knicks’ record of 13 straight postseason defeats.

INDIANAPOLIS (AP) — George Hill and Ian Mahinmi each scored 22 points, Paul George added 19 and the Indiana Pacers beat the Toronto Raptors 100-83 on Sunday to tie the first-round playoff series at 2-2.

Game 5 in the best-of-seven series is Tuesday night in Toronto.

Jonas Valanciunas led Toronto with 16 points, and Kyle Lowry and DeMarre Carroll each had 12.

Indiana scored the first seven points, took control with a 3-point spree late in the first quarter and led by as much as 25 points in the first half.

Toronto, which never led or tied the score, cut it to 57-42 at halftime, but couldn’t got closer than 11 in the second half.