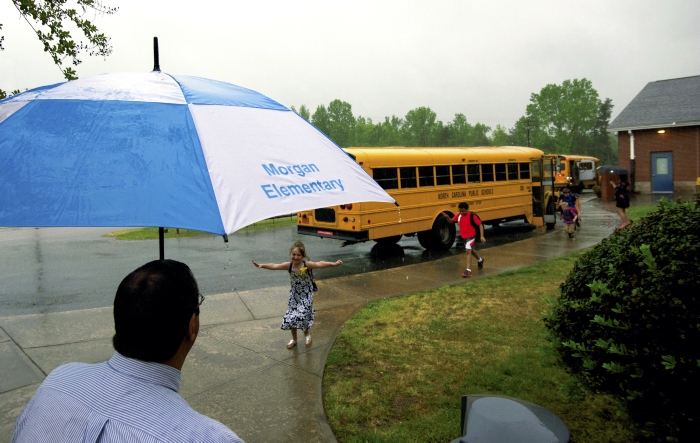 As a former principal at Morgan School, I want to “defend” this school and community as one of the hardest working and close areas you will find. When I arrived there were several ancient swings and seesaws that made up the playground equipment. The teachers had very few supplies to work with to teach the children. The children ate in an old building which was woefully inadequate for today’s health standards.

During the first year by working with the PTA, we purchased over $10,000 worth of playground equipment. We installed it ourselves to save money as installation was about 50 percent of the cost of the equipment itself.

The community has done it again by raising $40,000 to buy new equipment. There are no large companies or foundations to go to so the community did it the best way they knew how.

I am not sure how many materials the teachers have now, but the PTA used monies from our Halloween Carnival (now politically correct Fall Festival) to replace many of the silver fish infested materials. This Halloween Carnival was a learning experience as everyone including students pitched in for a day of fun with a side effect of raising many needed dollars.

During my final year at Morgan the school system decided it was time to upgrade the buildings and get rid of the cafeteria which passed inspections by the Health Department only because they knew that was all they could do. The county maintenance department did everything they could to keep the building in shape to pass these inspections. The children, teachers, and principal learned how to have school in the middle of a construction zone because we knew what we had to look forward to. It again was a learning experience as everyone saw up close and personal how construction worked. Additions have been made several times since to make this a workable campus.

Now a school board representative from Salisbury says the consolidation opposition is driven by emotion. The majority of the present school board is made up of those supported by the Republican Party, as their names appeared on the cards passed out at the polling places.

Now it appears one of their groups may be having second thoughts. It seems their main objective is to do education on the cheap instead of allowing parents to have some say in the makeup of their school. It may not be the most economical way but numbers alone don’t always make the best decisions.

Yes, emotion might play a part, but if I were a parent of a child who lived at Panther Point I would not want my child being on a bus for another 15-20 minutes to get to Rockwell School. Rockwell is a good school but is not part of this community. I am not sure these parents would have the same zeal to support Rockwell as they have for their small, close-knit school.

Woodleaf School has been limping along for years with terrible water and sewer problems, and it does not make sense to replace this small school. It makes more sense to consolidate with Cleveland to get a new, modern facility large enough to support many needed programs.

But to seemingly decide it is time to potentially save a little money to close neighborhood schools is short-sighted. Wholesale changes would need to be made to attendance zones and many bus rides would be increased significantly. This would create another firestorm.

If the political climate had been different over the past 20-30 years, Rowan County would have likely had an increase in student population to fill the empty seats. But businesses don’t want to come where they are not treated with respect and don’t get benefits offered by other areas.