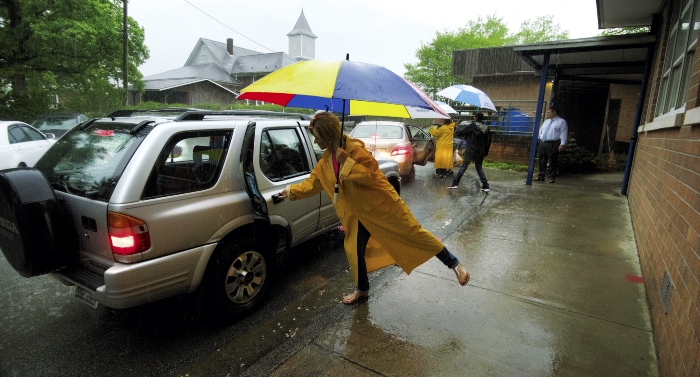 JON C. LAKEY / SALISBURY POST Sherry Kluttz, teacher assistant in first and second grades, leans out to open the door as students arrive for class on Friday at Morgan Elementary School. Morgan Elementary is one of the schools that the school system may decide to close.

Walking through the halls of Mount Ulla, Enochville, Morgan and Faith elementaries, it’s easy to see the fingerprints of the community: a quiet reading garden at Faith, a new playground and science lab at Morgan, an old trophy case at Mount Ulla and Enochville parents hurrying towards the cafeteria for lunch with their kids.

So when the Rowan-Salisbury Board of Education heard an April 7 proposal that could close the four schools — in addition to the already slated Cleveland and Woodleaf — tempers flared.

The proposal sparked a firestorm of criticism on social media, and left parents, community members and school employees grappling with the possible loss of their history, as well as their school building. The buildings have become more than just schools, they’ve twined themselves into community culture.

In all six cases mentioned in the proposal, a school has been on the grounds since at least the 1920s. Faith has had a school since 1899. Morgan’s clapboard, two-room schoolhouse still sits on the grounds.

“To me, Enochville is almost like a historical site,” Enochville PTA President Amy Keller said.

Keller went to Enochville when she was in elementary school. So did her husband.

“He saw me on the playground and said he was going to marry me,” she said, laughing as she remembers.

It’s a story that Keller tells to her children, who also attend Enochville.

Principal Jennifer Warden calls Mount Ulla a “generational school.” Alumni from the school’s high school days have a meal and fundraiser there once a year, and a trophy case holds old yearbooks, awards and photos that date back to 1913.

But even newcomers have grown attached. Melissa Burleson and her family had just moved from Florida when they enrolled their children in Enochville, and Burleson fell in love. So the news of the potential closure came as a shock.

“I was obviously very upset to think that that could happen . . . because we fell in love with the small school,” she said.

The board has listed an aging infrastructure, low seat capacity and high maintenance costs as reasons for consolidation. However, those criteria were not taken into account in the proposal that named the four schools, Robert Kimball with the Operations Research and Education Laboratory said during the presentation.

That’s not to say the schools don’t have their problems – Morgan, for instance, has a bad roof leak right over a media center technology station. But parents and community members aren’t sure it justifies shuttering the schools.

“I feel like this community would come together to help the school anyway we can,” Morgan PTA President Julie Whicker said.

“It’s working. It’s working out here. So why mess up a good thing?” Whicker wondered.

Maloney said she can understand the need for changes in the school system, but said the lack of information is one reason communities might be up in arms.

The April 7 presentation discussed redistricting, but the board did not have the information at the time to examine the logistics of the plan — and that’s a problem that parents have jumped on.

“I think the way that it came out put a lot of fear into the community — they don’t mind change,” Maloney said.

The people of Faith, she said, do not want their school taken away, and are worried their children will be dispersed throughout the county. If the board is going to look at consolidating schools, it needs to get some things straight first, she added.

“If you’re going to do that, I think you need to consolidate with a stronger plan in place,” she said.

One major concern parents – particularly at Morgan – have voiced is the issue of bus routes. Under the proposed redistricting, Morgan students, who often live on the border of Davidson or Stanly counties, would be bused to Rockwell Elementary.

“There’s no logical way that you can give them a shorter bus ride,” Whicker said.

“From a parent standpoint, I absolutely hate it. It really pulls on my heartstrings,” she said.

But she said that as a PTA member and someone who is very involved in the school system, she understands that sometimes, tough choices have to be made. Old schools can’t be maintained forever, and will eventually have to close — it’s been done with other schools, in other places.

“So I know that it’s something that eventually has to happen, but I hate that it’s happening,” she said.

Burleson said she’s trying to “take her heart out of it and look at the bigger picture.”

While parents expressed doubt that closures were really in the best interest of the students and mentioned being frustrated with a lack of answers and lack of solutions, they — along with school principals — expressed a desire for conversation, dialogue and alternative solutions.

Keller said that education has changed so much since she was in school that a closing feels “inevitable.” But to Keller, even if the school building is closed, Enochville Elementary won’t disappear.

“I think learning can take place anywhere. I think it’s people that make the building and the facility,” she said.

As long as the kids and the teachers are there — as long as the people of Enochville are involved in their child’s school — it will live on.

Burleson said she hopes more light will be shed on the issue at the board’s Monday business meeting. The meeting begins at 4 p.m. in the Wallace Educational Forum board room.