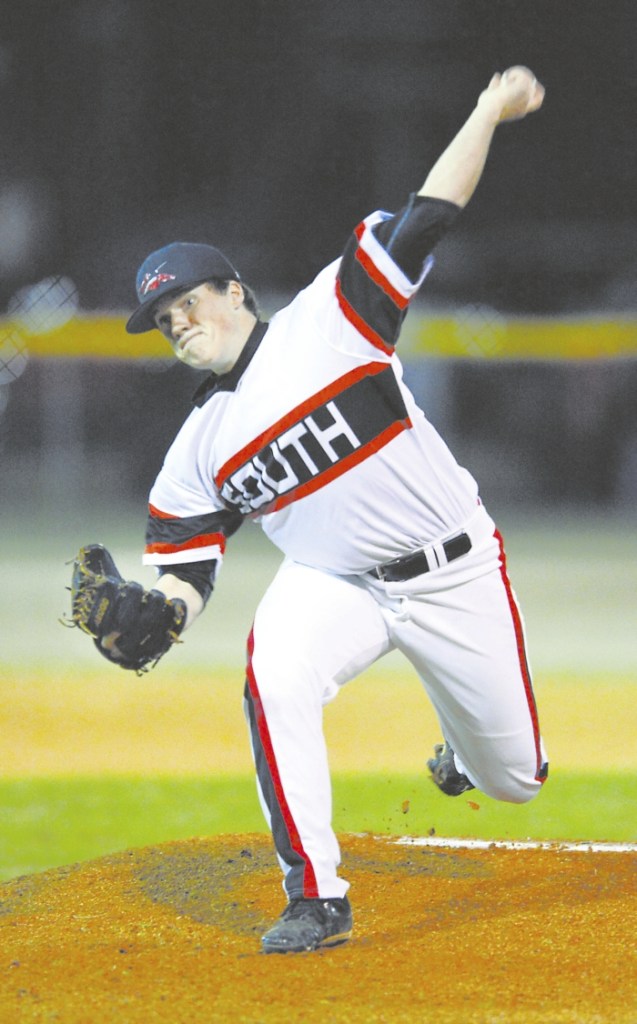 LANDIS — South Rowan pitcher Blake Johnson won’t have to change his wardrobe as a member of the Belmont Abbey Crusaders, a school that also features a red and black color scheme.
In addition to keeping his shorts and T-shirts, Johnson will try to keep a strong tradition going.
South has sent some very good players to Belmont Abbey. South outfielders Caleb Shore and Patrick Atwell became starters for the Crusaders and Atwell played on a team that made the 2009 Division II World Series.
Belmont Abbey head coach Chris Anderson, who played at Catawba, spent three summers as the pitching coach for South Rowan American Legion teams, so he’s very familiar with the South area and with South athletes and coaches.
“Coach Anderson knows what kind of kids we have and he knows how hard they work to get better every day,” South coach Thad Chrismon said. “Blake is a super person. He’ll be a great representative of South Rowan.”
Besides being a great person, Johnson has frequently been a great pitcher.
He’s won 16 games in three varsity seasons, which ranks him second at South in this century behind only Andrew Morgan, who won 18 from 2001-03. Johnson has passed some pretty fair South pitchers this season on that career wins list, including Daniel Moore (13), Matt Miller (13) and Dillon Parker (15).
“Blake has pitched in a lot of big games for us, and he’s won a lot of big games for us,” Chrismon said. “He’s pitched as many innings here as anyone has in a long time.”
Baseball has been a part of Johnson’s life for a long time.
“Since I was 3 and playing T-ball,” he said.
He’s a natural left-hander, although he swings a bat right-handed.
“I’m glad I’m left-handed,” Johnson said. “That’s a big help for any pitcher.”
When Johnson was a sophomore, he was ready to pitch for the varsity, so South used him in an unusual way. When it was his turn to start on the mound, he pitched for the varsity, but when he wasn’t needed to pitch, he swung the bat and played first base for the jayvee team.
That was good planning for the future by South. The last two seasons, Johnson has hit for the Raiders, and as a senior, he’s been their cleanup hitter. In the 5-2 win against Hickory Ridge, Johnson not only pitched a strong game, he belted a three-run homer.
“I’m a pitcher first,” Johnson said. “But I’ve surprised myself a few times as a hitter.”
Johnson hits mostly singles, but some have been clutch. He produced the run-scoring single that gave himself a win against Carson last week.
“As a senior, he’s been a pretty solid force hitting the baseball,” Chrimson said. “He’s worked on his swing. He’s improved as a hitter, and he’s been a great team leader in a lot of ways.”
Johnson began his sophomore year as the guy who pitched the non-conference games, but after he won four of those non-conference games, including two shutouts, he was promoted to pitching higher-profile South Piedmont Conference games. He quickly proved to be a bulldog in one-run wins against East Rowan and Concord. He even won in the playoffs that season, beating North Lincoln, 8-3, in a first-round game.
Johnson finished that 2014 season with a 7-1 record and an ERA of 0.86. He only walked five batters in 49 innings.
Johnson was counted on as South’s ace as a junior. He went 5-2 with a 3.41 ERA. He had four league wins and also logged an Easter tournament victory against a strong Lake Norman team.
As a senior, Johnson is 4-4. He’s won league games against Northwest Cabarrus, Carson and Hickory Ridge, as well as an Easter tournament game against Salisbury.
There have been some tough times, including lopsided losses to Carson (12-1) and East Rowan (8-0), but Johnson always has bounced back strong.
“Every time he pitches, he learns something,” Chrismon said. “He studies his games and makes adjustments.”
Johnson has won eight county games in his career, including three against Carson and two against East Rowan.
“I’ve had a chance to play on strong teams, and we’ve accomplished good things,” Johnson said. “I’ve played on two teams that won the Easter tournament in Kannapolis and we made it to the third round of the playoffs my sophomore year. We’ve got a chance to do well again this year. We want to finish strong.”
South (14-7, 10-6) is tied for third in the South Piedmont Conference and is sure to be in the 3A state playoffs for the seventh straight season.
Johnson will be joining another successful program. Belmont Abbey is 33-11, is 2-0 against Catawba this season, and is receiving votes in national polls.
“They’ve got a great program, but Blake can help them out,” Chrismon said. “He’s getting a super opportunity, and they’ll use him in the right way.”
Johnson, 5-foot-10, 200 pounds, has attended camps at Belmont Abbey, and they liked him from the start. Every college is looking for lefties.
Johnson plans to major in business, and he’s already signed up a roommate for next year. That will be North Rowan lefty Brandon White, who is similar to Johnson in a lot of respects.
“We played travel ball together,” Johnson said. “We’ve been friends for a long time.”

L-R gets lacrosse sweep at Catawba