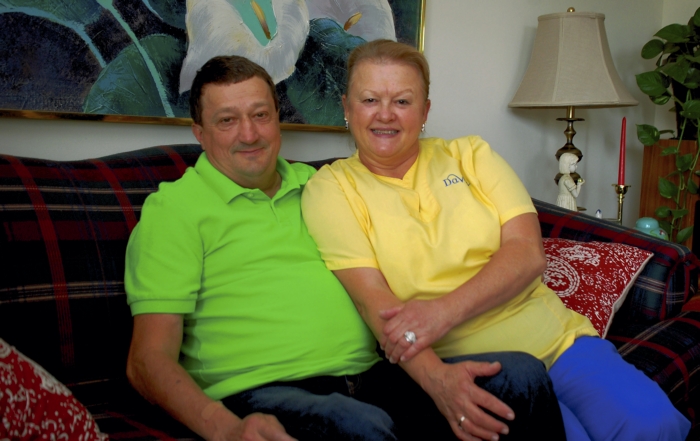 On disability and unable to work for several years, Leonard was back on dialysis three times a week for three-a-half hours a session. Both of his kidneys were duds, and the prospects for a new one were slim.

In 2010, Leonard had received a kidney transplant, but that donated organ never functioned. He then dealt with some heart issues that finally were resolved through medication, and to get back on a new transplant list, Leonard had to demonstrate he had at least $5,000 in an account.

The $5,000 was to prove he could afford the anti-rejection pills he would need should he receive another kidney. Jeff and his wife, Brenda, didn’t have that kind of money.

Jeff first approached his pastor at St. Paul’s Lutheran Church, then they both went to the church council. Leonard’s predicament seemed like a job for St. Paul’s Helping Hands Ministry.

Parish nurse Jill Earnhardt and a committee of three other people try to connect people in need with resources — it could be assistance with an electric bill, a parent looking to find daycare, someone needing grief counseling, helping with an at-home recuperation or connecting a family with hospice.

Many times through the years, the St. Paul’s congregation through Helping Hands Ministry also has come to the financial support of people facing serious and chronic health challenges — patients with leukemia, cancer and Lou Gehrig’s disease, for example.

Earnhardt calls the church ministry a story of faith in action.

“See a need, meet a need,” Earnhardt says. “We try to change lives, that’s what we’re about.”

Through a fish fry and special offerings on Sundays, Helping Hands Ministry raised the funds Leonard needed to get back on the transplant list.

The morning of Dec. 13, 2015, a Sunday, Jeff was attending church and Brenda was back at their duplex, nursing the flu. She received a telephone call alerting Jeff there was a kidney ready for him and could he plan on getting to Wake Forest University Baptist Medical Center by that evening.

Brenda put on clothes and dashed down the road and into the church to tell Jeff the news.

Jeff was on the operating table by 6 a.m. the next morning, and this time, the donor kidney proved to be an efficient workhorse.

“I call him our Christmas miracle,” Earnhardt says.

“We celebrate as a church together. We celebrate those victories. They are an amazing couple, and it’s a real faith-builder to see how God has really helped them in this whole process — and how the community helped them.”

For the first time in years, Leonard is thinking about looking for part-time work. He would never have imagined the possibility last year at this time. Brenda says her husband was underweight with dark, sunken eyes. Now his color his back, and there’s a fullness to his face.

“He just looks tremendous,” Brenda says, using the same adjective, “tremendous,” to describe what the church’s help meant to the couple.

Jeff says he couldn’t have asked for a better Christmas. He spent a week in the hospital after the operation, and within two weeks, he knew his new kidney was going to work.

Today, Leonard takes 12 anti-rejection pills a day. He’s playing basketball on the outside court at the church and attending yard sales and auctions that attract his interest. Leonard feels as though all kinds of opportunities are in front of him again.

“You can’t say how good that church is,” Leonard says. “They’ve done a lot for me and a lot for the community.”

A 1989 graduate of West Davidson High School, Leonard moved to Rowan County with his family a year later. He settled into a job at the Winn-Dixie grocery store that used to be on Jake Alexander Boulevard.

“That was a good place to work,” he says.

Leonard held jobs in the store’s produce, dairy and meat sections over more than a dozen years. When the store closed, he moved to the grocery department at Walmart. The problems with his kidneys first presented themselves as ulcers on the bottom of his feet.

These “holes” were about the size of quarters, and the neuropathy Leonard also was experiencing led to his toes binding up and becoming deformed. Years later, Earnhardt described the neuropathy to the Leonards as Jeff’s body turning against itself.

In 2006, Leonard started his grueling regimen on dialysis.

“It just drains you,” says Brenda, who works at a dialysis unit, where the couple first met. “It takes a couple of days before you get your strength back.”

Because of his feet, Leonard qualified for disability. He was on dialysis almost four years before the unsuccessful kidney transplant in 2010.

It wasn’t that his body rejected the new organ. Doctors said the donor kidney just never worked. So it was back to dialysis, having the heart issue corrected, seeking help from the church and getting back on the new transplant list.

Brenda says you cannot imagine what Leonard, now 45, went through these past 10 years, while still being able to have a positive attitude.

Leonard says he always has approached his illness knowing that many other people are worse off and fighting bigger problems.

The Leonards hope to attend this coming Saturday’s Cruise ‘n Barbecue at St. Paul’s Lutheran Church. The proceeds from the 6th annual event will go to the Helping Hands Ministry.

Earnhardt, the parish nurse for St. Paul’s, says many volunteers within the church make the ministry’s work possible. “When there’s a need, they move,” she says.

“That church is tremendous,” Brenda Leonard agrees. “It’s the most giving church I’ve been to in my life.”