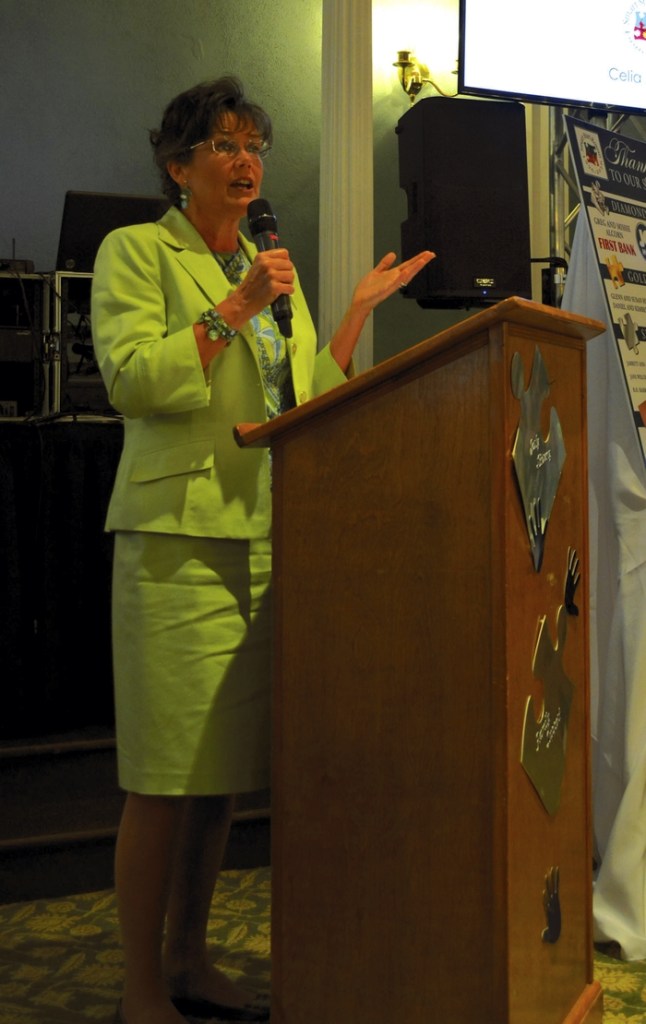 Smart Start’s 20th Anniversary Celebration Dinner was an opportunity for the non-profit organization to look back, to look forward, and to pay tribute to its beloved founder, the late Dr. Shirley P. Ritchie.

So it was appropriate that Smart Start’s Shirley P. Ritchie Champion for Young Children Award was presented to Dr. Martha West, one of Ritchie’s dear friends.

“I’ve never been so surprised,” West said after the event Thursday evening at Rowan Museum.

Ritchie had been eagerly looking forward to the event, but died in November after a brief illness. Her daughter, Celia Jarrett, stepped in to present the award.

As Jarrett read a long list of the honoree’s accomplishments, West began to get an inkling that it was she who was receiving the award.

“I did do all those things,” West said, “but I’ve lived a pretty good while. This award is so special. Our moms went to college together, so we’ve always known each other. When I left Catawba, Shirley took my place.”

Both women worked in the college’s School of Education.

Standing arm in arm with Jarrett, West told the crowd of 150 that she almost left teaching during her second year in the classroom. She looked into another job, she said, but it required typing, and she didn’t know how.

“So I went back to the classroom and I thought, by George, we’re going to make this work,” West said. “I’m so glad I did.”

“I do hope more and more people will learn about Smart Start Rowan,” West said afterward. “If you miss out on what you can learn your first five years of life, some children don’t ever catch up.”

West said she never regretted her decision to continue teaching.

“It would have been a terrible mistake to do that,” she said. “I was meant to do this, you know?”

“Shirley was able to rally the troops to have quality early care and education that included all children,” Honeycutt said. “Twenty years ago, that was not the case. There were no programs that were inclusive of children with disabilities in the classroom. She also wanted to be very diverse in culture, race and religion. It continues to be that way today, and one of our priorities at Partners in Learning is to have that diversity and keep that vision alive.”

The center was built through private funding, and then split from what was then Rowan Partnership for Children after Ritchie secured Smart Start funding. The two groups have continued to work closely over the years, Honeycutt said.

Ritchie was a member of St. John’s Lutheran Church, where she founded the church’s Child Development Center, which is a five-star child-care facility.

“Our relationship with Smart Start Rowan is critical,” said Joanna Smith, executive director. “It’s one of the biggest ways we’re able to provide quality to children in early education programs. They provide us with training, funding and technical assistance. It would be hard to find all of that without Smart Start.”

“Smart Start Rowan has so many resources,” said Denise Lyerly, owner of Joy N the Morning home child care center, a five-star facility. “I’m able to take advantage of several programs they have. I can check out books, and totes with toys, games and activities from the Early Resource Learning Center, and we can come in and make die cuts for bulletin boards.”

Demetrius and Myeshia Black have three children, Samaria, 5, and Samuel Jr. and Micaiah, 4. The family now lives in Shelby, but the couple returned for the dinner, and Myeshia Black appeared in a Smart Start Rowan video which premiered at the event.

“There have been so many Smart Start programs we have loved and been a part of,” she said. “Our daughter was very well equipped for kindergarten because of these programs.”

“Smart Start Rowan is an umbrella organization that helps with oversight of so many good things going on in Rowan County with early childhood education,” said Greg Alcorn, one of the evening’s sponsors with wife Missie. “I grew up with the Ritchie family, and Shirley was our den mother in Boy Scouts. She was an inspiration.”

Many of Ritchie’s family and friends attended the event.

“I knew Mother was involved in Smart Start, but I never really knew much of what it was about,” Cliff Ritchie said. “I’ve enjoyed getting to know about the mission, and I realize what a pioneer my mom was. It’s good to be able to support what she loved.”

Event entertainment was by Now Are the Foxes and Joel Everett Music, with dinner by Goodfellas by Chef Santos.