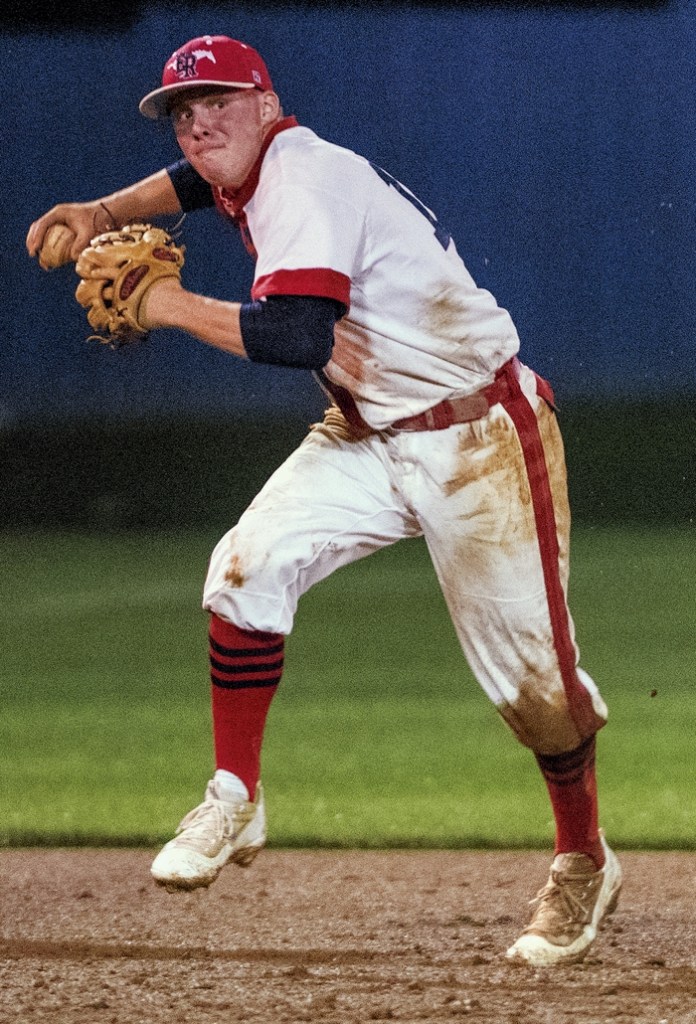 GRANITE QUARRY — High school baseball seasons are brief, so all the guys who manage to accumulate 100 hits in their careers are special at the plate.
East Rowan’s senior shortstop Ike Freeman is special. He has 107 hits … and counting. He got No. 100 in the Mustangs’ recent win against Concord, and then he went 7-for-12 in his next three games.
Freeman also has walked 39 times in a four-year varsity career, while striking out 30 times. That’s a tremendous ratio that speaks volumes about the healthy respect pitchers have for him and also for his knowledge of the strike zone.
“He’s just a really good hitter, a strong offensive player,” East coach Brian Hightower said. “Part of what he’s accomplished is talent, but part of it is has been busting his tail from the first day he got here. We’ll give a kid a chance to get better if wants to work, and Ike has worked.”
His lethal bat is part of the reason Freeman signed recently with the University of North Carolina.
He may end up as a second baseman or outfielder for the Tar Heels, but he’s made so many terrific plays for East this year that there’s at least a chance he’ll be able to handle shortstop at a level where it’s essential to make the routine play every time.
In back-to-back South Piedmont Conference games last week, Freeman turned sure hits through the hole into outs, making acrobatic and accurate throws to first as he neared the third-base line.
“I had a rough stretch in the field early this season,” Freeman said. “But lately I’ve felt really comfortable out there.”
Physically, Freeman looks like a guy who can play at UNC. At 5-foot-11, 190 pounds, he’s built like a strong safety, and he runs the bases with good speed and savvy. He’s 13-for-14 on steals the last two seasons.
Freeman has good power and he drives pitches on the inner half of the plate. That power has shown up mostly in doubles so far — he has 25 two-baggers in his career — but he’s also smashed three homers this year and five in the last two seasons.
Freeman credits the South Charlotte Panthers showcase team with giving him the opportunity to be seen by UNC and other NCAA Division I schools.
“I owe a lot to the Panthers,” Freeman said. “There were some games we played in the big tournaments where 30 to 50 scouts watched me and I got to play against great competition, guys who will be draft picks.”
UNC was the No. 1 school for Freeman from the start of his career, just as it is for a high percentage of the prep stars across the state.
“UNC is where I’ve always wanted to go,” Freeman said. “Even when South Carolina started coming to my games, I knew that if UNC offered, I was going to commit.”
Freeman committed in the summer of 2014. He obtained the SAT score he needed for admission to UNC back in the fall, but it was too late to get all the paperwork done for the early signing period in November. UNC told him it wouldn’t be an issue if he waited until April to sign, and that’s what he did.
Freeman debuted on the East varsity as a freshman in 2013 and batted .279 in an injury-shortened season.
As a sophomore, he went 32-for-97 (.330) and led the Mustangs in RBIs for the first time with 24.
As a junior, he batted .372 and led the team in batting average, hits, extra-base hits and RBIs.
There’s been more growth as a senior. He’s headed for career bests in every offensive category. He’s batting .484 with a .571 on-base percentage. There was a 4-for-4 game against Glenn and a five-RBI outing against Robinson.
“The biggest step for Ike this year has been in the leadership role that he’s taken on as a senior,” Hightower said. “He’s added being a great leader to all of those offensive numbers.”
Freeman won’t be playing baseball this summer, as he’ll be reporting to UNC in June to get an academic head-start with summer school classes.
There are a lot of colleges where Freeman, an all-region showcase player and honorable mention All-American for South Charlotte, would’ve been a certain starter as a freshman. At UNC, he’s going to be facing stiff competition for playing time, but he’s excited about the challenge.
“UNC is his dream,” Hightower said. “And he’s earned the right to follow that dream.”