L-R gets lacrosse sweep at Catawba 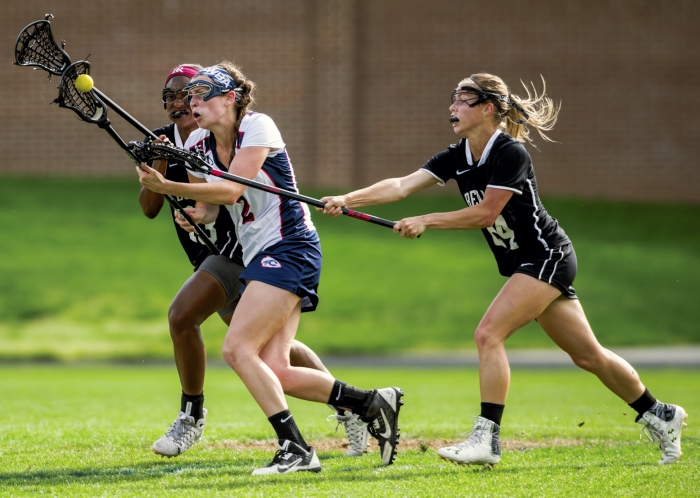 The Bears improve to 10-6 overall and 7-1 in the SAC, while the Indians fall to 7-9 and 4-4. Catawba finished in a three-way deadlock for fourth place in the league, but was seed sixth after tie-breakers.

That means Catawba will travel to No. 3-seed Wingate to open the conference tournament on Tuesday.

Lenoir-Rhyne started strong and began to pull away in the final 12 minutes of the first half. Leading 3-1, the Bears would increase their edge to 11-3 by the break.

“This was definitely a winnable game but we didn’t come out strong enough to begin with and we just didn’t do the little things today,” said Catawba coach Jordan Clodfelter, now in her fourth season at the helm. “In the second half, they really pulled together as a team and did much better and closed the gap some — but just ran out of time.”

Alyssa Corace scored three goals for the Lady Indians and handed out a pair of assists. Jones also had three goals. Megan Shortt had a goal and two assists.

Clodfelter said that the team is already looking forward to the tournament match-up with Wingate.

“We’re one of the more competitive teams in the conference when we show up ready to play” added Clodfelter. “We just need to put it together for the entire 60 minutes of a game.

“The program has come a long way and continues to get stronger and stronger,” continued Clodfelter, who played at Guilford and assisted at Pfeiffer before coming to Catawba. “Our kids are all talented, want to work hard and are here for the long run.”

Ines Flueck posted 16 saves in goal for the Bears.

Visiting Lenoir-Rhyne outscored Catawba, 7-2, in the second half to claim a 12-7 win in SAC men’s lacrosse action on Saturday night at Shuford Stadium.

The Bears complete an undefeated league campaign, improving to 10-4 overall and 8-0 in the SAC. The Indians drop to 5-9 and 3-5.

Lenoir-Rhyne scored the first two goals and led 3-1, before Catawba rallied to pull even at the end of the first quarter. Connor Eakes tallied a man-down off a pass from Liam Lynch to pull the Indians within 3-2 at the 3:56 mark.

The Indians got a big spark when goalie Ryan Applegate raced down on a clear to net his first career goal with 1:57 to go in the quarter. It marked the first goal for a Catawba goalie in school history.

Carson Sterling put the Bears back on top early in the second, but Lynch and Connor Kennedy scored back-to-back in a 20-second span to put the Indians ahead for the first time at 5-4 with 8:45 to go before the break. Make Hanlon tied things up at the 6:57 mark to send the game to the half even at 5-5.

Hanlon opened the second-half scoring and Shane Gottberg added a second six seconds later as the Bears scored four goals in the first 5:04 of the third quarter to grab a 9-5 edge. The Indians pulled two goals back, on tallies from Cole Fanzo and Chase Scott, to close the gap to 9-7 at the end of the quarter.

Sterling scored quickly for Lenoir-Rhyne to start the fourth quarter as the Bears went up 10-7 at the 14:34 mark. Sterling added another goal with 5:19 left and LR shut out the Indians in the final quarter to post the win.

Seven different Catawba players had a goal for the Indians. Lynch had a goal and an assist. Applegate added a dozen saves to go with his historic goal. Eakes, the national leader in face-offs, won 16 of 23 against the Bears.

Catawba is the No. 6-seed for the SAC Tournament and will open play on Tuesday with a game at Queens.