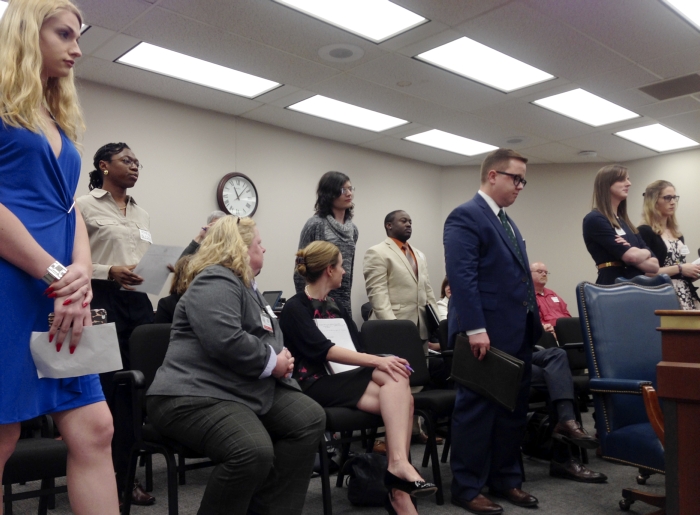 Transgender citizens stand during a Senate hearing in South Carolina regarding transgender rights.

RALEIGH — Is there any way for the opposing sides debating North Carolina’s House Bill 2 to move beyond the current impasse? The odds may be against it. But on two outstanding matters, in particular — access to state courts and access to public restrooms — I think action is possible.

Let’s start with the courts. With the passage of H.B. 2, a previous avenue to pursue discrimination claims in state court was closed. Plaintiffs can still use the federal system. But some plaintiffs were going to state court, instead, because it was less expensive, the time limit to file was longer, and there was no cap on awards for pain and suffering. For their part, employers thought plaintiffs had an unfair leg up in state court.

Removing the state court option has proven to be unwise and unpopular. Gov. Pat McCrory wants the General Assembly to restore it. Perhaps reluctant legislators could be persuaded to do that if the time limits or potential damages were modified at the same time.

While polls show voters largely agree with H.B. 2 opponents about access to state courts, polls also show voters largely agree with H.B. 2 supporters when it comes to access to restrooms, showers, and locker rooms in government buildings. Under H.B. 2, such multi-occupancy facilities must bear the designation “male” or “female.” Generally speaking, only people with birth certificates matching those designations have a legal right to enter.

There are exceptions. Most involve either servicing the facilities or assisting minors and the disabled. The most striking exception, however, is created not by H.B. 2 itself but by the fact that North Carolina allows those who have had sex-change operations to get the sex on their birth certificates altered. That means post-surgical transsexuals can assert a legal right to use facilities designated for the sex other than their birth sex.

Here’s the problem: transsexual and transgender are not synonymous. Some transgender individuals cannot have surgery, for financial or medical reasons. Others do not wish it. Many of them consistently express a gender identity different from their sex. Some even take hormones to alter their appearance.

By failing to define the terms “gender identity” and “gender expression,” the original Charlotte ordinance appeared to violate basic expectations of privacy by giving a 40-year-old man, perhaps only feigning a female gender identity, a legal right to use a restroom, locker room, or shower next to a 10-year-old girl or a 70-year-old grandmother. But wouldn’t it also violate basic expectations of privacy to require a biological woman who dresses like a man — and thanks to hormone treatment may even have a beard — to use such facilities next to the 10-year-old girl or 70-year-old grandmother?

One accommodation is to build more single-occupancy facilities. But this can’t be done overnight. And there are some buildings for which the retrofit might be impossible or prohibitively expensive.

Here’s another solution. Several federal agencies and states allow transgender people to use something other than birth certificates to prepare documents such as passports and drivers’ licenses. In North Carolina, the sex designation on licenses must match birth certificates. However, our license application could also contain a blank for “gender.” Applicants already supply other information, such as race, that is kept on file by the Division of Motor Vehicles and displayed only if the licensee wishes it.

So, first, add gender to the application for driver’s licenses or ID cards. Next, amend the H.B. 2 facilities section so that its exception refers either to sex on a birth certificate or gender designation at DMV. We’d still need commonsense policies to ensure privacy in showers and locker rooms. And the question of how transgender minors will be accommodated is a matter for families, school officials, and apparently now federal courts to decide.

But regarding most cases, my proposal would seem to balance competing privacy interests fairly while continuing to deter potential abuses by peepers and sex offenders. I’d like to see Republicans and Democrats talking about these and other ideas for exiting the H.B. 2 impasse. What about you?