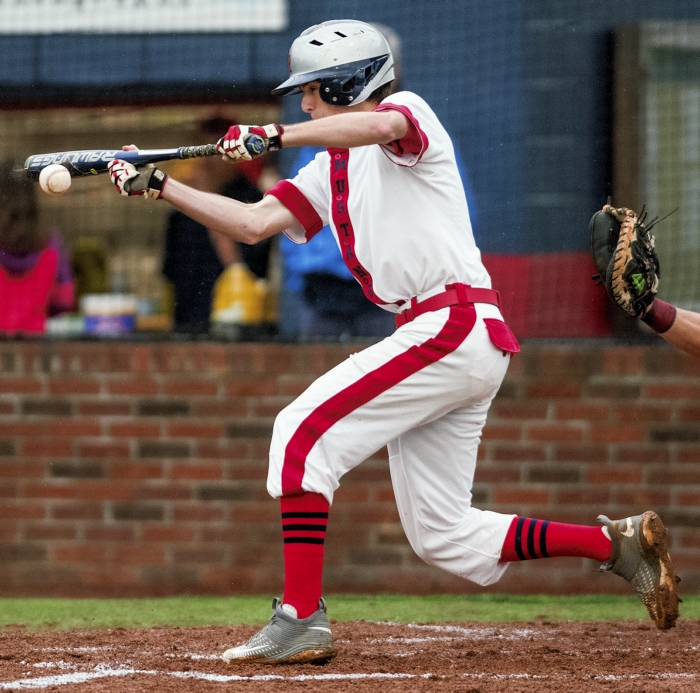 GRANITE QUARRY — The paying customers at Staton Field got an unexpected treat Friday night — a how-to seminar on clutch hitting.

They watched host East Rowan score all of its runs with two outs in a weather-dampened, 6-2 SPC victory against J.M. Robinson.

“Two-out hits are huge,” shortstop Ike Freeman said after second-place East (16-6, 12-4) remained a game behind West Rowan with two to play. “Especially in the later innings. We own those innings.”

Even winning coach Brian Hightower was in a relaxed mood after the Mustangs improved to 7-1 this month. “We’ve been a mix of everything,” he said. “On Monday, we struggled and went 1-for-12 with runners in scoring position and lost. But we like to think we’re a pretty good team third time through our order — fifth, sixth and seventh innings.”

East used a bit of defensive chicanery to spark this victory. The game was scoreless in the top of the third inning when it successfully executed the hidden ball trick for the first time this spring. Freeman, second-baseman Tanner File and pitcher Will Brown were the key role-players when Robinson’s Mark Perkins was caught wandering off second base.

“I was looking at the ump for a new ball,” Brown said after winning his fourth game. “Then they started yelling at me from the bench to kneel down and tie my shoe. Next thing I knew they called the guy out at second. I couldn’t believe it worked.”

It worked because Freeman sold it like a pro.

“Hightower came out of the dugout and told me to hold the ball,” he reported. “And nobody on the other team heard him. Me and Tanner just got to talking around the bag. Even the umpire knew I had the ball, but he was cool about it.”

So was Hightower. “To be honest, I just told Freeman to hang onto it,” he said. “As long as (Brown) doesn’t go on the dirt, we’re all right. We just waited for (Perkins) to step off the bag. We do a lot of crazy stuff.”

Robinson coach Damon Whalen agreed. “Any advantage you can get, you take,” he said after the Bulldogs (8-13, 6-10) stalled in the quest to reach fifth place. “You’ve got to pull out all the tricks.”

East got busy pulling in the last of the third against Robinson right-hander Brandon Dayvault, a sophomore who was making his first start. There were two out and two runners in scoring position when Justus lined a two-run double to center-field.

“It seems like every hit he gets is a big hit,” Hightower said of the SPC’s RBI leader. “He’s driving in a lot of runs with his hits.”

Brown followed with a run-scoring double to the right-center gap. Robinson trimmed its deficit to 3-2 in the fourth when Joe Tolone doubled home a run and another scored on a groundout.

“Two runs and we could have scored more,” Whalen said. “(Brown) was loose and then he buckled down and got out of it. He competed. That’s the beauty of this game.”

It looked even prettier after the guests put runners on first and second with none out in the top of the fifth. Brown escaped by fanning Jackson Raper and Seth Johnson — the Bulldogs Nos. 4 and 5 hitters — on high, tailing two-seam fastballs, then inducing an inning-ending groundout.

“Hightower came out and talked to me,” Brown explained after his five-inning stint. “He said, ‘Show me what you’ve got. Be a man.’ I really had to dig deep.”

East’s lead bulged to 6-2 in the last of the sixth. With two out and no one aboard, Wise blooped a single down the right-field line. Freeman grounded a base hit up the middle. And Owen brought them home with a long, fly-ball double to left-center. Chandler Blackwelder’s double into the right-field corner closed the scoring.

Reliever Colby Myrick induced six groundouts to earn a save, giving the crowd and Hightower another reason to smile.

“We are what we are,” he concluded. “And we’re a pretty good team.”