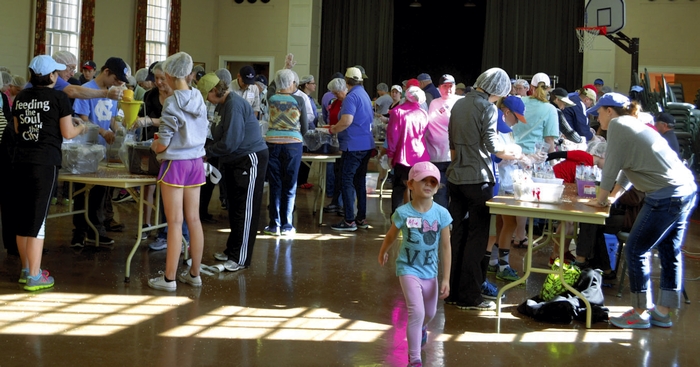 You know an enterprise is worthwhile if people will happily wear hairnets to make it happen.

Plenty of hairnets –and a few baseball caps as well—were sported last Saturday morning, April 16, by members of First United Methodist in Salisbury as they assembled food packages for a Stop Hunger Now event in the church’s fellowship hall.

The event was part of a larger Day of Serving initiative by First Methodist that included members planting flowers at Capstone Recovery Center, which provides support to women whose lives have been affected by drug abuse. Men from the church tackled various projects at Rowan Helping Ministries.

The following day during the church’s 11 a.m. service, Pastor Mark Conforti reported that an estimated 125 people came together to share the love of God through the Day of Serving.

Participants approached him, Conforti said, expressing how wonderful the experience had been and asking if the church could do it again. “Yes, we can,” Conforti assured the congregation.

The most ambitious of the three projects was the meal packing. With the help and guidance of representatives from Stop Hunger Now, close to 100 volunteers packaged more than 20,000 meals Saturday morning. First Methodist provided the funding for the meals, which cost 27 cents each.

Based in Raleigh, Stop Hunger Now has provided more than 225 million meals in 73 countries since its founding in 1998 and this year expects to package 45 million meals, according to the organization’s website.

Each meal package is designed to feed six people and contains one cup of rice, one cup of soy protein, dehydrated vegetables and a packet of vitamins. The meal is prepared by adding boiling water.

The meals can last at least two years in storage since they may languish on loading docks and not be distributed for many months.

Doug Miller was among the church members who devoted their Saturday morning to packing meals.

“It was a fantastic experience,” he said, and one that got many different people involved, from scouts, to youth to Sunday school classes.

Church member Jason Walser said the experience was, by far, the most meaningful thing he had done all week. “Being a part of the effort to feed brothers and sisters around the world whom we will likely never meet was empowering and humbling,” he said.

Walser said he also appreciated the human interaction the experience offered: “I got to bond with people I had seen before but whom I hardly knew.

“I still can’t believe how much food we were able to package in such a short time,” he said. “After pouring 50-pound bags of rice and soy into the filling stations, I woke up feeling muscles that I haven’t felt in a long time.”

First Methodist’s Witness Team, led by Jeff and Gloria Matthews, partnered with the church’s Missions Team, led by Taffy Jordan, to organize the Day of Serving. The original idea came from Conforti, who, with his wife Mary Allen, orchestrated similar events at their previous church, Davidson United Methodist.

Conforti said he was grateful that First Methodist could partner with Stop Hunger Now, Capstone Recovery Center, and Rowan Helping Ministries to support their missions.

“We hoped to offer opportunities that enabled church members of all ages to serve others,” Gloria Matthews said. “As our first attempt, we wanted to start small with three opportunities and hopefully in the future we can grow it into even more opportunities to engage more members.”