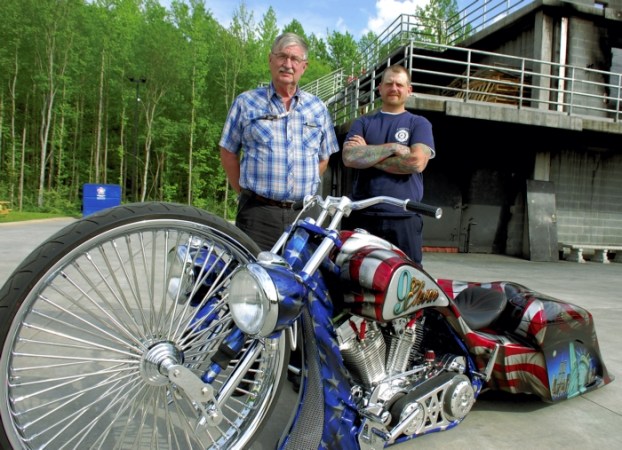 SALISBURY — “Merica,” one of the more popular, custom-built and painted motorcycles in the country, might be coming to a fire station near you.

“I had to share it,” said Jay Moore, a volunteer with the Liberty Fire Department and a custom painter of motorcycles himself. “I can’t show it to all of them (all firefighters in Rowan County), but I can show it to a few.”

The motorcycle, also known as the “9 eleven” bike, is a tribute to those who lost their lives during the Sept. 11, 2001, terrorist attacks at the Twin Towers in New York. The modified Harley-Davidson features a 32-inch wheel in front and is otherwise low-slung and tight to the road.

The elaborate custom paint job features firefighters in the back, a red-white-and-blue flag motif throughout and scenes showing the Twin Towers intact one one side of the bike and the towers in ruin on the other side.

The custom motorcycle was built by Joey Hensley, owner of Back Yard Baggers in Winston-Salem, and it was painted by Jody Goodwill of SRM Paintwerks in Elkin.

Moore works with Chris Fox at Fox Motorcycle Paint Shop at High Rock Lake. They had a bike that competed against Merica at Nationals, and Moore used that connection to bring Merica to Rowan County over the coming week.

He hopes to take it to several fire stations in coming days.

On Thursday evening, Moore especially wanted to share Merica with Director Roger McDaniel and students in the Fire and Emergency Services programs at Rowan-Cabarrus Community College.

Moore can’t say enough about what McDaniel and RCCC are doing for firefighter training in Rowan County. RCCC has the top EMT program in the state as far as students trained, and fluctuates between No. 1 and No 2 in its annual fire service training.

“This particular program doesn’t get the credit it deserves,” Moore said. “It’s the real deal. You’re going to learn how to be a fireman here.”

When Merica has appeared at shows, Moore said, it’s interesting to witness how quiet people are as they walk around it, getting a closer look.

“It can draw a crowd without anybody saying anything,” Moore said.

According to Hensley’s Facebook page for Back Yard Baggers, Merica has been retired from shows and is now for sale. The asking price: $75,000.

The short life of Bill McCora: ‘I didn’t even know him, but I loved him’