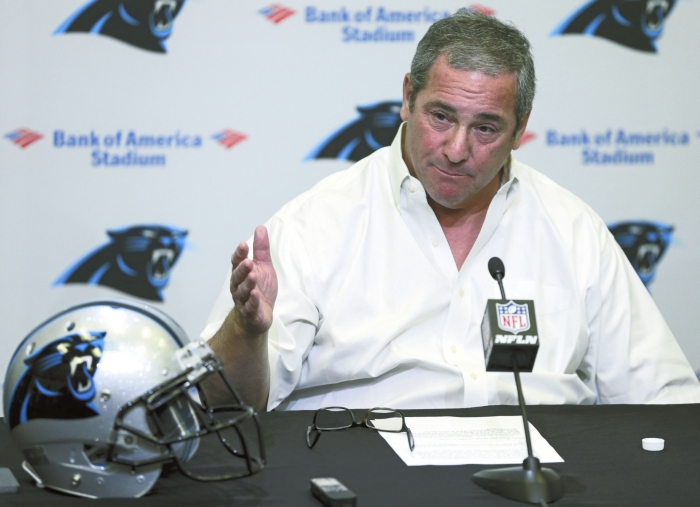 Carolina Panthers general manager Dave Gettleman talks about cornerback Josh Norman during a news conference for the NFL football team in Charlotte, N.C., Thursday, April 21, 2016. The Panthers have the 31st pick in the first round in next week's NFL draft in Chicago. (AP Photo/Chuck Burton)

Panthers general manager Dave Gettleman said the decision to allow his All-Pro cornerback to become a free agent will lead to the same thing: “We’re still going to take the best available player.”

However, there’s little denying Carolina’s surprising decision to rescind the franchise tag offer to Norman has left a huge void in its secondary. Opposing quarterbacks had a rating of 54.0 when throwing Norman’s way, the best mark among cornerbacks in the NFL.

The Panthers have the 30th overall pick and could go a number of directions, including defensive end, offensive tackle, safety or finding a replacement for Norman.

“When we decided to place the franchise tag on Josh, we were fine with him signing it and then working on a long-term deal,” Gettleman said. “As we got deeper into conversations we realized it was a significant difference between our thoughts and theirs. The intervening weeks gave us additional time to evaluate where we’re going as a franchise.

“With the realization a deal was not going to get done, our internal conversations kept leading us to the fact that the one-year deal was becoming less and less attractive. So we made our decision and we’re moving on.”

Gettleman wouldn’t rule out Norman returning at a later date if he doesn’t find a lucrative deal elsewhere.

Clearly, the Panthers didn’t want Norman’s situation to become a distraction in a locker room that has excellent chemistry.

“We want people that are all in,” Gettleman said.

Gettleman said this year’s draft class includes “a nice group of cornerbacks,” but wouldn’t elaborate on if the team was leaning that way with its first pick. The free agent cornerback market has been pretty well picked over, but Gettleman said “sometimes the answer is already on your roster.”

Things to watch in the upcoming Panthers draft:

HOG MOLLIES: Gettleman is a huge believer that you win with big guys up front, what he calls “Hog Mollies.”

ANOTHER TOP PICK: Gettleman views this draft as getting an “extra” first-round pick with the return of wide receiver Kelvin Benjamin, who blew out his knee in training camp last summer and missed the team’s Super Bowl run. Benjamin was the team’s top receiver as a rookie in 2014 and his return may preclude the Panthers from going after a wide receiver in this draft.

Gettleman selected wide receiver Devin Funchess in the second round last year and feels he’s on the verge of emerging as a top playmaker. Funchess had seven catches for 120 yards and a touchdown in last year’s regular-season finale against Tampa Bay and had a TD catch in Carolina’s 49-15 win over Arizona in the NFC championship.

DRAFTING WELL: The Panthers have won three straight NFC South titles in part because of how well Gettleman has drafted. Of the 16 players he’s selected over the past three seasons, 13 remain on the roster and seven are starters.

KUECHLY’S PROGRESS: Coach Ron Rivera said All-Pro middle linebacker Luke Kuechly is recovering well from offseason shoulder surgery and is expected to be ready for the season. With Thomas Davis still playing at a high level and last year’s first-round pick Shaq Thompson steadily improving, it’s hard to imagine the Panthers going after a linebacker early in this draft.

THE RIGHT TACKLE: The Panthers are 22-4 with Mike Remmers as their starting right tackle, but he struggled mightily on the game’s biggest stage, allowing two strip-sacks to Denver’s Von Miller in the Super Bowl, resulting in 14 Broncos points. Offensive tackle is certainly in play for the Panthers, especially with left tackle Michael Oher in the final year of his contract. Gettleman said there are “four to five” tackles in the draft with first-round talent.