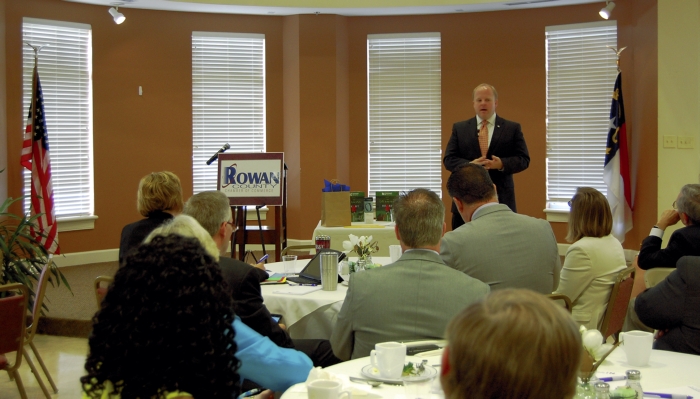 Amanda Raymond/Salisbury Post Cody Hand, vice president and deputy general counsel for the North Carolina Hospital Association, was the keynote speaker for the Rowan Chamber of Commerce's Power in Partnership breakfast on Thursday. He talked about the health care issues that needed to be addressed during the 2016 State Legislative Session.

SALISBURY — Healthcare is important for any business model, according to Cody Hand.

The Rowan Chamber of Commerce held its Power in Partnership breakfast at Trinity Oaks on Thursday.

He has also practiced law with his wife.

Hand talked about the health care issues he hopes to talk about during the 2016 state legislative session.

He started off by saying that hospitals are important for local economies.

“If you’re trying to recruit businesses, the last thing you want is not to have a hospital,” he said.

He said businesses want hospitals close by for their employees, and hospitals are interested in expanding the job base in local communities.

“We do not want to be the largest employer. I can’t tell you a single hospital whose goal it is to employ the most people in the county,” he said.

One issue that Hand mentioned that he would talk about during the legislative short session is the certificate of need, a law that determines where health care services are needed.

Hand said that there is an effort during every session to change or repeal the law.

He also said they would be discussing Medicaid expansion and reform during the session.

Last year, Hand said, the General Assembly changed Medicaid from a fee for service environment, which paid for every service provided to the patient at a certain facility, to a capitated model, which pays for the episode of care.

He talked about a need for behavioral health reform in the state.

“Behavioral health is in crisis in the state of North Carolina,” he said.

He said the state did away with many mental institutions, but did not provide the community care that was supposed to replace those institutions.

Many patients suffering from mental health problems end up in the emergency department, which is not the best place for them, Hand said.

“We are happy to treat them medically in the emergency department, but our emergency rooms are not the place for psychiatric patients,” he said.

Hand also talked about paying first responders for transporting patients to facilities other than hospitals, and working with magistrates and the state’s involuntary commitment law.

Hand ended his talk by saying that health care is important for employees and recruiting more businesses.

“I did want to make sure you understand — anytime you see an elected official and you’re talking business, it’s very important that you understand that health care is an important part of your business model,” he said.

The last Power in Partnership meeting for the season will be the Leadership Rowan class graduation on May 19 with Dr. Jim Johnson from the University of North Carolina at Chapel Hill as the keynote speaker.