Advice from an editor: Be careful what you send 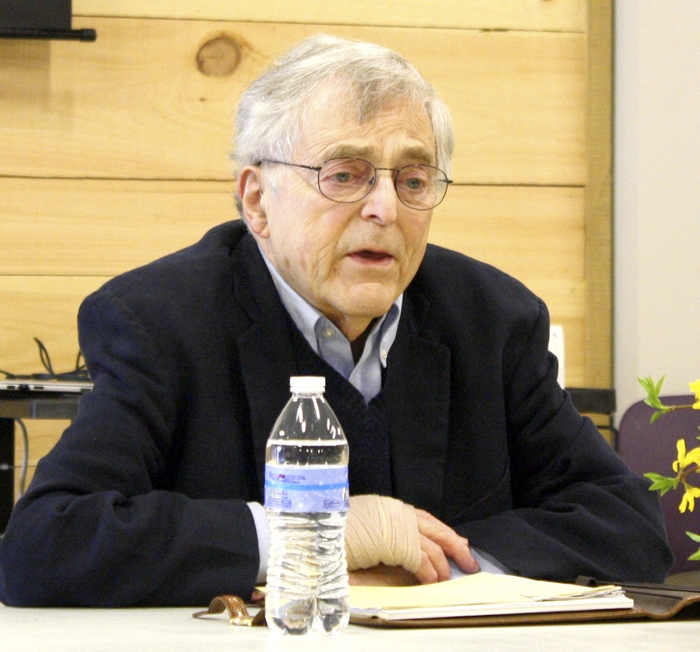 Deirdre Parker Smith/Salisbury Post C. Michael Curtis has been the fiction editor at The Atlantic for decades.

When C. Michael Curtis spoke at the Rowan Reading Rendezvous, he offered sage advice to writers trying to get published.

He focused on the things that make editors say “No.” It’s more than a no, it’s a manuscript in the trash followed by a rejection letter.

By avoiding those mistakes, writers have better chance of the much-sought-after “Yes.”

Curtis has been the fiction editor at The Atlantic — formerly Atlantic Monthly — for 35 years, and has worked at the magazine for 50 years. Although he says the short story has changed, there are still some basic rules that will stop readers from going any further.

“Old editors, when they read the paper and see a pronoun agreement problem, they choke on their coffee,” he said dryly. He’s referring to “they” becoming a singular pronoun. And he says there’s “still a mystery about editors, especially short story and magazine editors.”

The Atlantic now gets fewer stories that it used to, but it’s still a lot, more than one person can do, although he is the one person. He estimated he reads 6,000 stories a year.

Editors at magazines that publish  fiction — mostly quarterly publications — are typically full-time college professors who can enlist the help of colleagues and students.

Remember, he said, the work you submit has little time to grab people. What these editors read tells them this is not fit for their magazine, it tells them you aren’t experienced or practiced.

Short stories, up until the 1970s, were easily defined. They had beginning, middle and ends and something had to change during the story. Now it can be anything, “now you don’t have to have that change.”

This creates a problem for editors. They have to remind themselves they may be reading a new, celebrated writer. “I have to make room in my reflections for the unexpected talent or approach. … I like to think we’ve discovered some good writers. Fame may be slow to catch up.”

The things that say “No” are obvious — careless spelling and punctuation. That usually means the writer is also careless about putting a story together.

The tense should be agreeable, the present tense and second person don’t often work well. The present tense, in the moment, stops time dead in its tracks.

And who is “you”? Readers get tired of wondering who you is. These problems can occur in combination.

“Inexperienced writers regard as precious every thought between two characters.” Those writers don’t know what really matters. It’s easy to spot numbing dialogue.

Be careful with the length of the story — a story that’s 50 or 60 pages long, the editor sees it is twice or three times as long as he or she can use.

Manuscripts that are hard to read because the font is too small or the lines are too long make it “hard to find the charms that are within.”

The cover letters are sometimes foolish. They include photos  that make no sense — an author playing an instrument. “We once got a picture of a woman in a bathtub covered with bubbles. It didn’t seem to have anything to do with the story.”

Edit the cover letter as well as the story. Curtis gave an example: “Dear wonderful person, this piece of literary fiction…,” Curtis said with a hangdog look.

It’s a story, you don’t need to use the words literary or fiction.

If a story has misspelling or changes verb tense three times in one sentence, forget it. “Do I need to read this story? No.”

“I am an unpublished author …”

“I really like your magazine, by the way.” Curtis looked askance, “There’s a great prophetic truth.”

Don’t send word of other publications or the rejection slips.

“We tend to shy away from simultaneous submissions. We understand why you do it,” but it will often stop a story cold, since the editor doesn’t want to publish the same thing someone else will. “If you do it, don’t tell us.”

But do talk about prior publication in other, comparable magazines that are serious about fiction. “It makes  difference if we read the submission, it makes us feel the author has skills and merit.”

If you’ve been to a writers’ conference, especially a known one, that “tells us you’re serious, or if you’re a graduate of a writing program.”

Agents don’t matter, Curtis said. “We prefer unagented work. We like to feel we discovered somebody.”

If we like it and it’s publishable, we use it.” He has even sent notes to encourage writers. “We get a lot of work that’s very good.”

Curtis has not written a story in years. “I go back and look at what I wrote,” he said with a groan. “It’s awful. It’s so clumsy. I made all those mistakes.”

Keep Curtis in mind the next time you prepare a short story or article for submission. His years of experience provide valuable lessons and can keep you from making rookie mistakes.

And don’t send photos of your dog, either.

Oscar D. Ramirez: How far we have drifted away