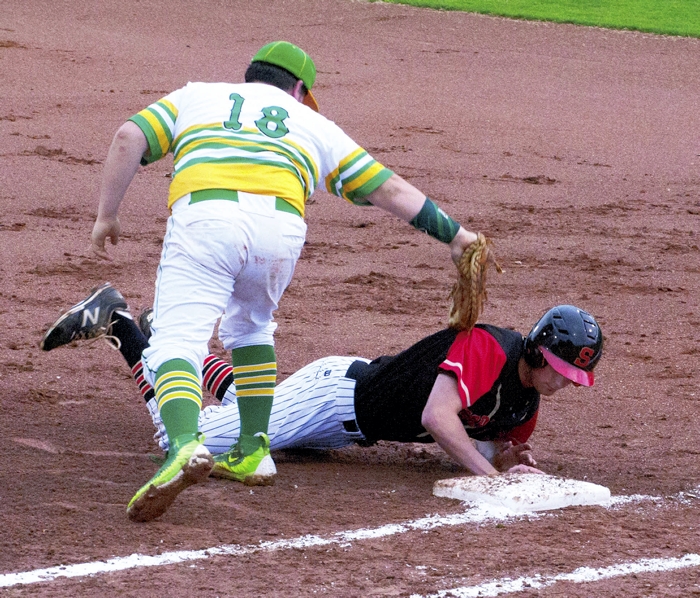 Salisbury's Joe Steinman gets back safely to first after a pickoff attempt. Mike Duprez/The Dispatch

TYRO — West Davidson spent two innings battering Salisbury all over the place and the visiting Hornets helped out by playing what their coach called “stupid” baseball amid the rain Friday night at Feezor Field.

But by the time it was over, the Green Dragons were stunningly on the losing end of an 11-8 game that cost them a share of the lead in the Central Carolina Conference.

The Dragons led, 5-0, after the first inning and 8-3, after the second. But they were undone by in part by six errors, numerous baserunning mistakes and a gritty effort by Salisbury pitcher Griffin Myers, who hurled four straight innings after the Dragons knocked his pitches all over the place.

“It’s pretty simple,” said West coach Jason Lemley. “In a game like this, when both teams are hitting the ball, you’ve got to make plays. Salisbury made plays when conditions were bad and we didn’t.”

West fell to 17-3 overall and 6-2 in the CCC, a game behind both Salisbury and North Rowan, with two games left in the regular season.

As far as making plays, Herndon didn’t think his team made any in the first two innings. Things got so bad for the Hornets that a runner was picked off second with the bases loaded and a 3-0 count to the batter.

But when there was nowhere to go up for the Hornets, they did just that.

“I don’t know,” said Herndon, whose team is 11-10 overall. “We’ve got character, I guess. We got them aside and told them they couldn’t play any worse. We were stupid on the bases, we had some bad at-bats. Our guys just responded and came back. It’s a great win for us.”

The Dragons were still up 8-3 in the top of the fourth inning and though Noah Sharpe gave up consecutive singles to John Yang and Chandler Lippard to start the inning, he got Alex Link on an infield pop fly and things seemed under control. But then Sharpe, who went the distance, walked Myers to load the bases and gave up a run-scoring single to No. 9 hitter Joe Steinman. Will Steinman grounded into a fielder’s choice to bring home another run.

Still, the Dragons were up 8-5. But then came consecutive back-breaking errors and when Harrison Smith smacked a two-run single up the middle, Salisbury had a six-run inning and a 9-8 lead.

It was a surreal turn of events.

“When you play a team the caliber of Salisbury, you can’t make mistakes like that,” Lemley said.

West could cling to the fact that it was still a one-run game but that changed in the top of the fifth when Will Steinman smacked a two-out, two-run double down the left field line. That was after Myers walked and Joe Steinman beat out an infield dribbler.

The Steinman brothers were a combined 5-for-8 with five RBIs.

Myers did his part, protecting the lead until Herndon took his starter out in the top of the seventh after he threw his 114th pitch. Smith came on with a 1-0 count to Sharpe, Chris Mauck on second and no outs — and retired the side to earn the save.

That made the start of the game seem like ancient history.

In the top of the first, the Hornets ran themselves right out of a rally when West shortstop Doulton Anderson tagged out courtesy runner Will Taylor and then gunned down Will Steinman at the plate for an unusual double play.

Myers was within a pitch of getting out of the first unscathed when Jake Adams recovered from a 1-2 count to rip a bases-loaded two-run single. Jake Simmons then crushed a mammoth three-run homer into the trees beyond the fence in left center for a 5-0 lead.

The Hornets got three of those runs back in the top of the second on one play. Joe Steinman singled to left with the bases loaded, collecting an RBI. But then the ball got past Adams, the left fielder, allowing the other two runners to score.

West got those three runs back in the bottom of the second on Sharpe’s run-scoring double and a two-run triple by Anderson.

The Dragons host East Davidson on Tuesday. The two first-place teams, Salisbury and North Rowan, play each other twice next week.