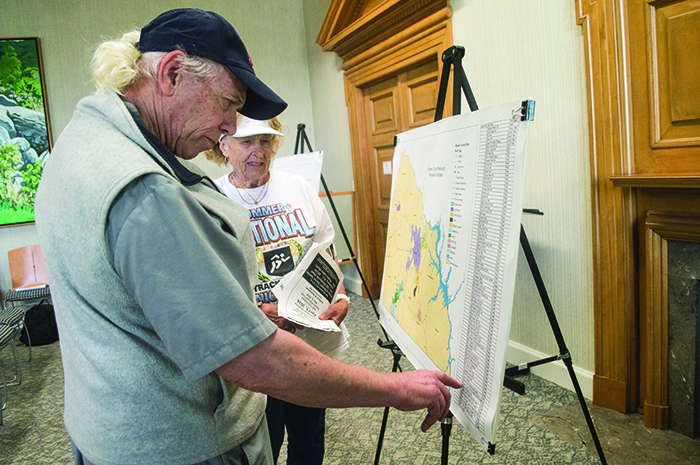 Josh Bergeron / Salisbury Post - Hazel O. Trexler-Campbell (back) and Vince Campbell (front) look over a map of Rowan County's Parks following a public meeting on Thursday at the library headquarters in Salisbury.

Meetings were held at the Rockwell branch and headquarters of the Rowan Public Library. About one dozen or so people attended the meeting in Salisbury, which was held Thursday afternoon. Rockwell’s meeting occurred at lunch time.

During the meeting in Salisbury, Rowan residents and employees of consulting firm McAdams — hired by Rowan County to complete the master plan — engaged in a free-flowing discussion about potential future improvements to Rowan’s parks system. Attendees also completed a survey that’s only available to those who attend the meetings or receive a copy by mail.

One attendee also mentioned a sports complex that contains varied types of fields. The sports complex will eventually be incorporated into the overall parks plan, but is currently part of a separate study for which the county hasn’t yet held any public meetings.

Community input will be used to formulate the final master plan, said McAdams planner and designer David Malcom. In the company’s final report, it will present a list of recommendations for new parks and upgrades to existing facilities. The last master plan for Rowan County expired in 2010.

McAdams representatives on Thursday presented a survey of current parks in Rowan County, including those owned by county government, private entities and municipalities.

Perhaps unsurprisingly, Dan Nicholas Park — a total of 425 acres — is the largest in acreage of any park in Rowan. It contains two soccer fields, four tennis courts, two basketball courts, six cabins, 78 RV sites, a playground and performing arts center, a nature center, greenway and putt putt course, according to the survey. Salisbury Community Park is the second largest — 295.42 acres. The community park contains five total baseball fields, four soccer or multi-use fields, a community center, three playgrounds and a greenway according to the survey.

The master plan would analyze current facilities to see if they adequately serve the population. One point brought up during the meeting was whether Rowan could more adequately spread out its parks facilities around the county.

A graphic shown during Thursday’s meeting indicates the master plan would be finished by August.