The short life of Bill McCora: ‘I didn’t even know him, but I loved him’ 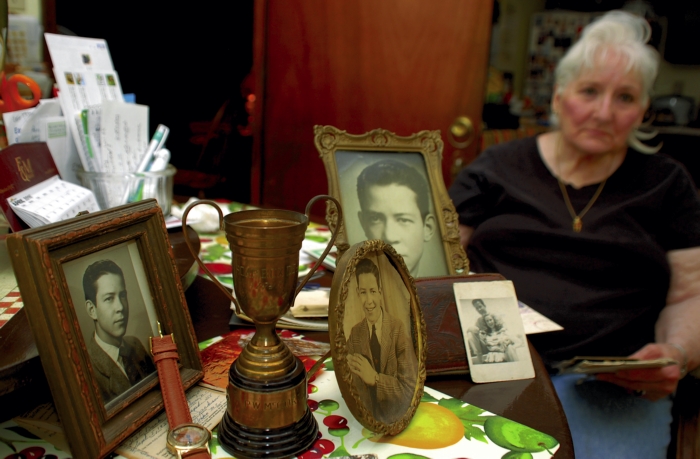 Linda McCora sits behind some of the photographs of Patrick William 'Bill' McCora. Also displayed are Bill McCora's watch, soap box derby trophy from 1942 and his wallet. McCora, a brother-in-law Linda never knew, died in 1949 at age 19. Mark Wineka/Salisbury Post

SALISBURY — On Bill’s birthday, Linda McCora and her late husband, Harry, would always place a flower on Bill’s gravesite at Rowan Memorial Park.

They also would go there on the anniversaries of Bill’s death. Patrick William “Bill” McCora III was only 19 when he died at Duke University Hospital April 12, 1949.

Harry McCora passed away in 2006, leaving Linda as memory keeper for the short life of Bill McCora, who was Harry’s only brother.

Though she never met Bill McCora — she didn’t marry Harry until 1961 — Linda takes her job seriously.

“I didn’t even know him, but I loved him,” Linda says.

Harry once built a nice case to hold all of the Special Olympics trophies their daughter, Sissy, had won. Sissy died at a young age, too. She was only 25 when the childhood tumors she was born with finally won.

In the midst of all of Sissy’s trophies sits a golden cup on a pedestal. Bill McCora won this trophy when he placed second to Clarence Beaver in the 1942 Soapbox Derby in Salisbury.

Linda McCora has photographs of a young Bill sitting in his soapbox racer, sponsored by Stanback headache powder. Harry had kept several personal things of his younger brother, and until recently Linda wasn’t sure where Harry had stashed them away.

One of her boys, Tommy, suggested she look in an old cedar chest in the closet, and that’s where the life of Bill McCora came to light again.

Linda found a skinny wristwatch of Bill’s, his leather wallet, a Catawba College yearbook, his business card from Cress & Son clothing store and all kinds of pictures — from loose snapshots to framed high school graduation portraits. There were also those Soapbox Derby photos from 1942.

“Bill was tall and lanky,” Linda says, and the pictures bear her out.

In addition, Linda found postcards and letters between Bill and his family, while he was hospitalized at Boston General Hospital in Massachusetts and Duke Hospital in Durham.

The last year or so of Bill’s life was not the best. He had a heart problem related to the valve going to his heart. While today, doctors often substitute a a valve from a pig or some other animal, Linda says surgeons tried to stretch and sew Bill’s valve together in Boston.

When he returned home from Boston in the summer of 1948, complications set in. He ran high fevers and had difficulty eating and ended up at Duke University Hospital in room 302 in the children’s ward, though he was 19.

Linda says the official cause of Bill’s death was a brain hemorrhage resulting from a blood clot. She knows all this from papers left behind and what Harry had told her.

“Harry had them all in an album,” Linda says. “It bothered Harry a lot to have Bill pass away.”

She reads one of the postcards from Boston that Bill sent to Harry, whose nickname was “Jiggs.” Harry was married at the time to his first wife, Betty. The postcard was dated Aug. 28, 1948:

Just a line to let you know I’m doing OK. How is everything in Salisbury? Daddy left today for home. Mother and I will probably leave next week. Love, Bill.

Bill McCora’s wallet had all kinds of cards inside: his 1947-48 Catawba College student ticket, which gave him entry into “all home games and entertainments”; his driver’s license; Selective Service card; Social Security card; and the Cress business card.

Before his heart started giving him trouble, Bill attended Catawba College as a freshman and sophomore, and he was scheduled to attend The Citadel in the fall of 1948. Even though Bill wasn’t a veteran, Linda says she and Harry also would visit his grave on Memorial Day because they figure Bill would have served his country after graduating from The Citadel.

“He was smart,” Linda says. “He was thrifty. He played music. He wrote songs. He was just a terrific boy, and he was very popular with the women.”

The photographs show Bill with Faynell, Bill with Dot Wheeler, Bill with the “Hefner girl” and Bill with Mae.

From the photographs, you also determine Bill had a fascination with cars and plenty of guy buddies, too. “Bill had a lot of friends,” Linda confirms.

A World War I veteran who named his first son, Harry, after a best friend who died in a foxhole beside him, P.W. McCora worked for 43 years for the railroad and also was a writer on the side.

There were actually four Patrick William McCora’s. Bill, the young man who died in 1949, was the third, and Harry and Linda also named one of their two boys Patrick William.

Linda has a flower wrapped in foil that Harry saved off his brother’s casket in 1949. She also has some church bulletins from First Presbyterian Church, showing when altar flowers were given in Bill’s memory.

She still gets choked up talking about Bill, the brother-in-law she never met.

“He deserves to be known,” Linda says. “He had a lot of accomplishments through the years, and they needed to be heard.”

Linda places Bill McCora’s Soapbox Derby cup back into the case in the living room. His memory is safe with her.