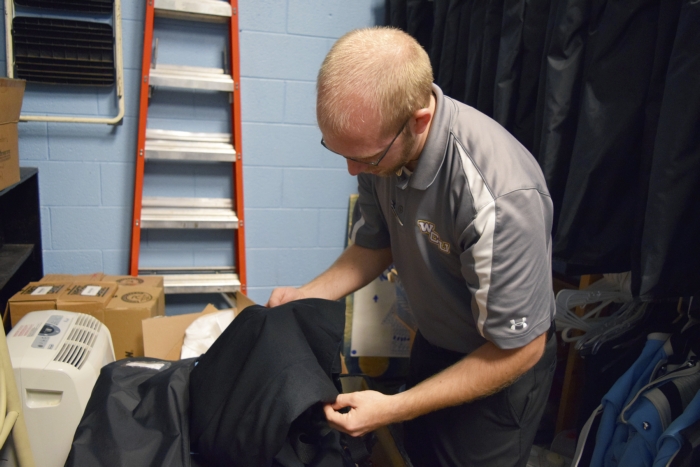 And despite careful care, alterations and creative fixes to rips and tears, the band’s regalia has finally reached the end of the line.

“Next fall we would have essentially been marching in T-shirts,” Trivette said.

The West Rowan marching band has raised more than $20,000 to replace its uniforms – which come at nearly $400 a pop – but the members still have a little farther to go. They need to raise an additional $5,500 before summer to secure 60 new uniforms for next year.

Normally, Trivette said, there’s not such a last minute crunch for uniform funds. Bands will typically put back some money each year to buy the next batch – but West Rowan hasn’t had that luxury.

When Trivette started as band director, the program was about $5,000 in the hole. His first three years were spent getting the band to break even, and then he began making sure that the group had all the instruments it needed. He recalls that the band was lacking a tuba and a snare drum. Uniforms took a back seat.

“It doesn’t matter what you look like on the field if you don’t have a horn to play,” he said.

When they finally got a break three or four years ago, they ran into another problem: funding sources. Many bands have a steady source of funding from running a concessions stand – but West Rowan’s doesn’t. Instead, they do several annual fundraisers. Trivette says the group sells West Rowan gear, sells donuts, runs a fifth grade back-to-school dance, and has an annual mattress sale. Once, they considered selling toilet paper.

In the meantime, the students made their uniforms last. Kids got creative with hiding stains and sewing on buttons. Trivette said students made an art of “frankensteining” their uniforms, patching plumes with electrical tape and splitting and resewing pants to fit. But after a while, wearing a stained, tattered uniform becomes a little degrading, Trivette said.

“It was a smoke and mirrors game for the last five years of making us look like an outfitted band, and eventually you’re just out of tricks to do it,” he said.

Last fall, the group hit a wall. Only 30 of the original 80 uniforms were deemed usable, and 13 percussionists marched in black pants and t-shirts. And despite seasonal cleanings, the uniforms had stains that just wouldn’t lift. With the need down to the wire, the group began hunting for a new look.

At the moment, the West Rowan marching band has placed an order for 60 uniforms, which will get them through the fall. But Trivette said that they really need 80 to ensure that every student can find a good fit.

To band is pulling some last minute fundraisers, collecting donations online and holding a pancake supper to invite the community to contribute to the next 10 years of a West Rowan tradition.

West Rowan High School’s marching band will be holding a pancake supper fundraiser Saturday from 5 to 8 p.m. at Salem Lutheran Church on Sherrills Ford Road. Online donations can be made at http://westrowanband.weebly.com/store/c11/Donate_to_the_WRHS_Band_Program%21.html

Trivette said that the band students aren’t the only ones who are excited for the new uniforms. The design was proofed by school faculty and other members of the student body, and they – as well as the band – can’t wait to shine.

The house that disappeared: Trying to save a hidden…